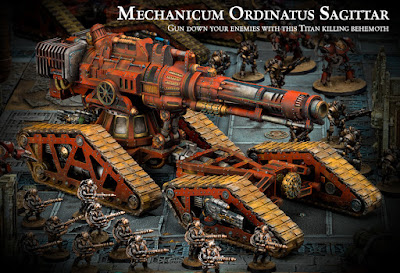 The Mechanicum Ordinatus Sagittar is a massively destructive war engine, as rare as it is potent. Similar in design to the Ordinatus Ulator, the Sagittar differs in its primary weapon being a Volcano Cannon of prodigious power.

In the time of the Great Crusade the Ordinatus macro engines were rarer than even the Battle Titans of the Legio Titanica, and only a handful of Forge Worlds had the resources or indeed the doctrinal blessing and religious authority to produce or maintain such embodiments of the Omnissiah’s divine wrath. Such was the sacredness of these machines above all others, that an entire subcult of the Mechanicum was devoted to their worship and propitiation.

The Ordinatus Sagittar carries a trio of Volkite Culverins as its secondary armaments, whilst its primary weapon is a Belicosa pattern Volcano Cannon, more often carried by Warlord class Battle Titans. An ancient pattern of weapon whose destructive power is comparable to many shipboard cannon and planetary defence lasers, few mobile weapons platforms are capable of mounting the Belicosa simply due to its savage power requirements. When engulfed in the cannon’s cohesive light, the strongest fortress walls may be reduced to glowing embers and the most resilient armour to molten slag and vapour.

Really cool - I like him more than the first one to be honest!

Also, little sad news - some FW stuff is sold out, including most of the Mark IV dreadnoughts. I managed to snap a MkIV Raven Guard one atleast ...

What do you think about the newest Mechanicum engine? Write us in the comments below!