Today I have some Word Bearers progress to share with you, starting with my Contemptor Dreadnought - hope you like him!

Contemptor-pattern Dreadnought, attached to the Chapter of the Graven Star


"Speak the words of Lorgar and you shall live forever in the glory. Speak them not and every one of you shall die today." 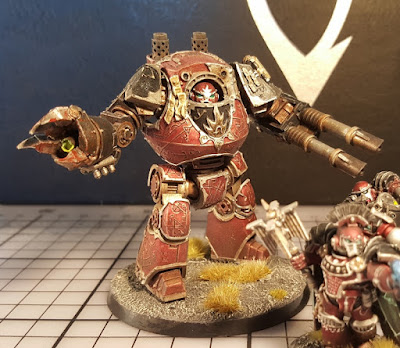 "Annunake" is a Colshisian term which means "Judges of Hell" or "Princely Sons", and was used within the Word Bearers Legion to denote those Legionaries granted the honour of continuing their service within the armoured shell of a Dreadnought.

Marakael was a former Master of Ordnance of the Chapter of the Graven Star, a Colchisian warrior deadly wounded during the Third Rangdan Xenocyde. He was intered into a late production, artificer wrought Contemptor pattern Dreadnought, and fought during the last days of the Great Crusade, at Istvaan and during boarding actions at the Betrayal at Calth. 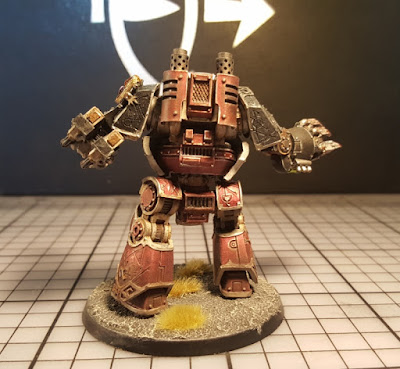 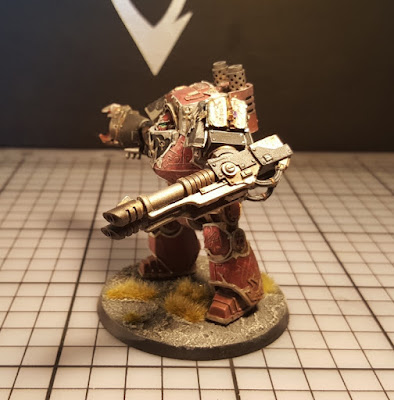 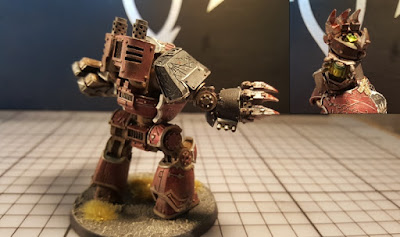 The next unit i want to finish for my Word Bearers is my tactical squad - 15 Marines will give me some manpower to overwhelm my foes during battles and boarding actions! 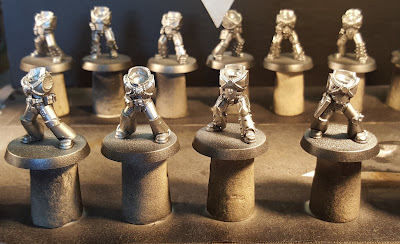 If you want to paint before final assembling, cork and old plastic sprues are helpful. Another trick that helps for painting parts with an airbrush, or spray: double-sided tape! Your parts will never again blown away from your airbrush.

I saw a question asked during the last WPR by Captain Agrippa regarding painting and assembling:

Interesting to see that some of you guys assemble marines before painting and others paint in stage. Still very much undecided how I am going to approach this.

I honestly thing there is no "true" answer to that. It mostly depends how you paint your models - airbrush, brush or a combination of both? It also depends on the models themselves, and their poses. Also, do you want a fast job for a tabletop army, or going into details? Painting before final assembling makes it easier to reach all the details, and especially bigger models benefit from it. 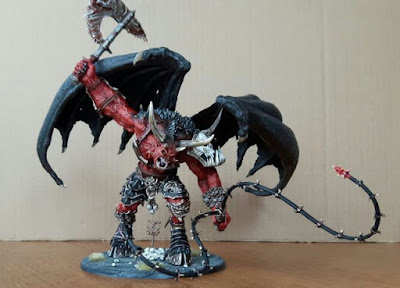 A good example for this would be my Ang'grath the Unbound - the wings are pretty huge and its easier to paint the body, weapons and wings seperate. The only drawback here is that you have to fix the connection points between the parts after most of your painting is done, which can be annoying (especially if the wings won't fit at all). In my case it wasn't a huge deal, as i wanted a blend between black and red, so I could do that after using some greenstuff/miliput mix to fix the wings.

Another example would be Knights or Titans - it's far easier to paint the armour plates seperatly from the "metal body", especially if you want to add weathering.

Hope you enjoyed my little post today. Do you paint before final assembling? What are your tricks? Write us in the comments below :)