After beeing sick the last days, I used today to paint up my FW event Navigator! It was a refreshing one-day project, and I'm pretty happy with the outcome. Side projects can help to give you some new energy, especially when you are painting a (large) army with the same scheme for a longer time period. Just be sure you won't loose your primal target, otherwise a side project can turn into a whole new main project!

PS: I actually managed to finish him a half hour before UK midnight! pew! Character in a day - mission completed!

Seeker of the Path, Weaver of the Æther, Homo Navigo

"Gaze long into the Warp and the Warp will gaze back into you." 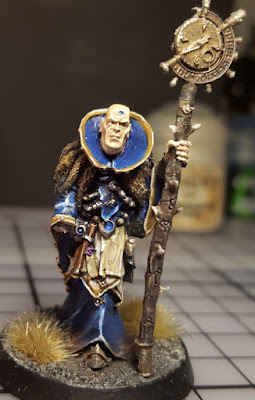 The origins of the Navigators - or Homo Navigoe - are shrouded in mystery. They are an ancient mutated or deliberately engineered psyker strain of Mankind "designed" to facilitate Warp travel. Clannish and insular, they have lived amongst humans since the time of the Dark Age of Technology and during the nightmarish centuries of the Age of Strife dwindled to extinction. It is not known how this unique sub-sepcies of humans first came into existence, though they may have been the result of long-forbidden genetic tampering with the human genome in a long-ago age.

Some Imperial scholars suspect (paradoxically) the hand of the Emperor if not in the Navigators' original creation, then perhaps in their recreation and certain increase in numbers during the Age of the Imperium -- as their Houses gathered to Him and pledged Him fealty after His conquest of Terra during the Unification Wars. The Emperor in person granted a charter to those Navigator groups who swore Him fealty, granting them His legal protection in exchange for their services as steersmen for the many starships of the nascent Imperium, and without them the Great Crusade and the expansion of the Imperium of Man would not have been possible. 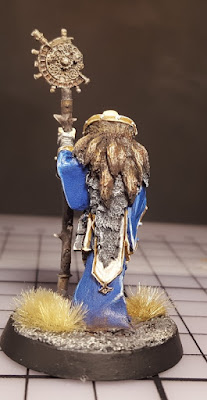 Navigators possess natural life spans of as much as four hundred years. As they increase in age, their abilities increase in power, and their physical appearance changes: the white and iris of the eye gradually disappears, leaving only a hardened black orb. All Navigators belong to a large group of noble families based on Terra in the great district of that world-city known as the Navigator's Quarter. These dynasties are known collectively as the Great Families of the Navis Nobilite. 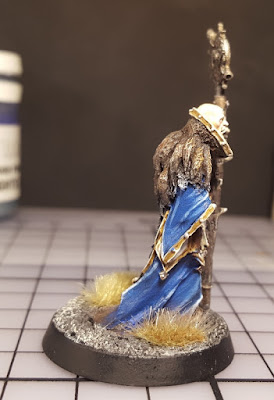 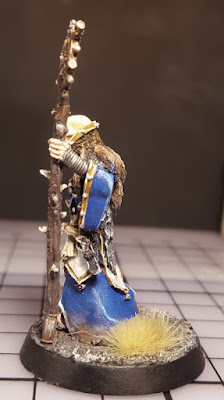 Note: The Ætherlabe mounted upon the Navigator’s staff is used to aid the bearer in plotting the tides of the Immaterium, detecting the ætheric bow wave of any enemy approaching through it or disturbing it in any way.


Hope you enjoyed my little post today. What side projects do you have waiting on your shelve? Write us in the comments below!