'There!' Kotama said once again, 'you don't feel that?'
Larama did feel it that time. He nodded and looked around himself. A few grains of grit dropped from the barricade.
'Distant artillery probably,' he responded trying to keep the concern from his voice. Another rumble was felt, marginally louder and fiercer, 'listen to the rhythm,' he raised a red gloved finger into the air and dipped it to every vibration.
'It's getting louder,' Kotama pressed his opinion. 'Does that mean it's getting closer?'
'Get the Commsei up here' Larama asked the junior of their squad whom quickly ran to the nearest Bastion.
'It could be a rolling bombardment?' ventured Hagami as he turned his eyes out past the group towards the plains, 'can you see any flashes?'
Larama turned his eyes to the direction that their vanquished foe had come the day before. Thick poisoned smog from the chemical bombardment which they had received from what seemed to have been a petty act of retribution, obstructed the sky completely and what reduced visibility to around fifty metres, 'can't see a hynti thing out there.' He was glad to be wearing the void plate that had replaced the Steel Guard's battle armour of old. The irony that the only thing protecting his squad from the miasma, was the designs that the Imperium had brought to the Purokar League was not lost on him.
Commsei Farako arrived to stand next to him, he had not had much time to get used to his Star's newest Commsei but already thought of him as a competent leader.
Another shake happened and Hagami's Lasrifle toppled to the ground.
'I felt it inside my tank' Farako spoke silently, his stature rigid as he looked past their defences.
'It's getting closer,' Larama matched his tone.
'I think we need to prepare for imminent attack,' Farako responded and activated his Vox caster, 'uncover the defensive trenches, ready yourself for rolling artillery bombardment. Larama turned to watch as the Kuskar Steel Guard began removing sheets of Plasteel from the staggered two man pits behind the barricades.
'I think you should be getting back to your tank Commsei,' Larama ventured.
'Agreed Sarsei Larama,' Farako said as he left the front line, 'get to your Bastion.'
Larama nodded and left barricades as the thumps began to rattle his teeth. The Bastion was sturdy but had long since stopped being air tight. He swiftly ascended the internal steps of the fortification determined to keep eyes on until the last moments.
He got to the battlements and put his hands onto the parapet wall. There were another seven Steel Guard standing on top and looking out to the murky gloom of the plains. He pushed his way to the front and was quickly joined by Kotama.
He looked down to the left and visibly witnessed the Commsei's tank vibrate at another impact closer into the gloom. His adrenalin was pumping now. It sounded so close, It was also getting louder and louder too, but it didn't sound like any explosion that he had ever heard.
Then it stopped. He couldn't be sure, but everyone's stillness made Larama believe that the Steel Guard were all holding their breath in expectation of what was going to happen next.
The chemical smog shifted slightly and swirled murkily, then a figure manifested, it stood perfectly still. As the figure's details resolved themselves, it became clear that he was enormous, taller than a mortal by almost a multiple of three. A long white cape flicked in the dull wind, and armour the colour of stained brass was seen beneath. 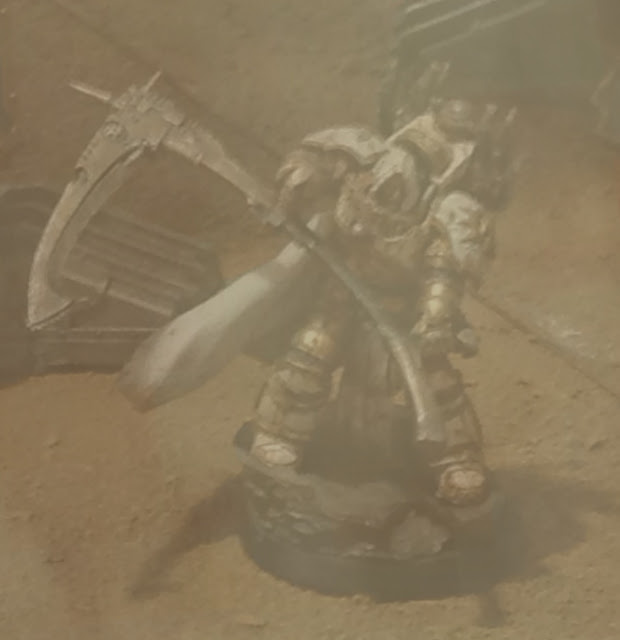 'Who the Meck is that?' Came the vox voice of one of his squad. Larama found he couldn't answer and a feeling of pure dread washed over him as he watched the figure sweep his gaze left and right slowly. The man then raised what looked like a giant scythe from his side and gently tapped the pommel to the ground as it came to rest upright.
The dirge of an ear splitting deep and mournful war horn then filled the air making every member of his squad start in terror. It was the most disturbing noise he had ever felt in his entire life and he fought every urge to not just turn and flee as the sound dragged on. They all snapped back to their training and the clatter of the entire army resting their Lasrifles on the defences was only barely heard.
'Hold!' Larama barked to his men, yet it came out choked and sodden with fear, 'Hold and take aim!'
He forced steel into his bones and tried to stand straighter.
The thumping started again and the hint of a smile appeared on the giant's face. Then, something un fathomably large pushed its way through the poisoned smog, whiffs of the gloom seemed to claw like hands trying to retain the hidden secret in it's depths as the behemoth revealed itself. A split T shaped gladiatorial head appeared first, with several red orb optics appearing like eyes from beneath the visor slit in the white head. Then ginormous barrels pushed through the swirling murk, two of the biggest weapons he had ever seen hung from the torso as arms, followed by two more almost as grand mounted on its shell like carapace. It was the colour of funeral black and red gore. It and it's fore bearer were the truest representation of death that Larama had seen in his long life.
The war horn finished its pronouncement and from within the walking war machine came a low growl like rumble, the sound of distant reactors powering up filled the air and the barrels began to fill with pulsating and bright energy.  Larama felt utterly helpless as he knew he was dead.
'All weapons fire! Fire FIRE!' screamed Farako. 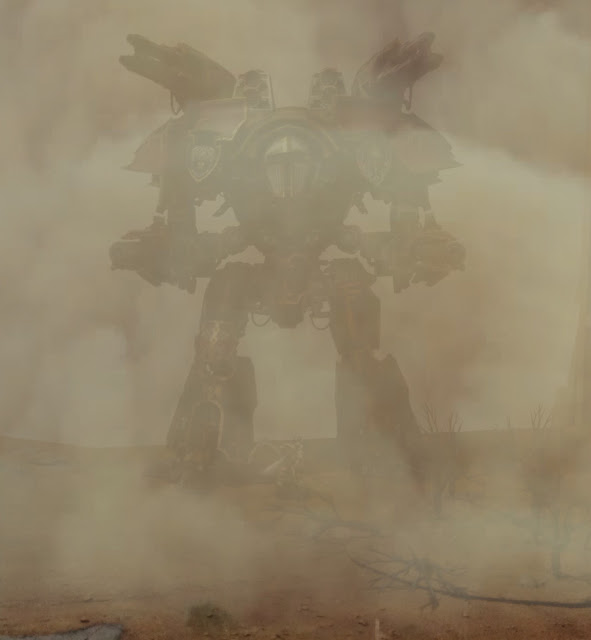 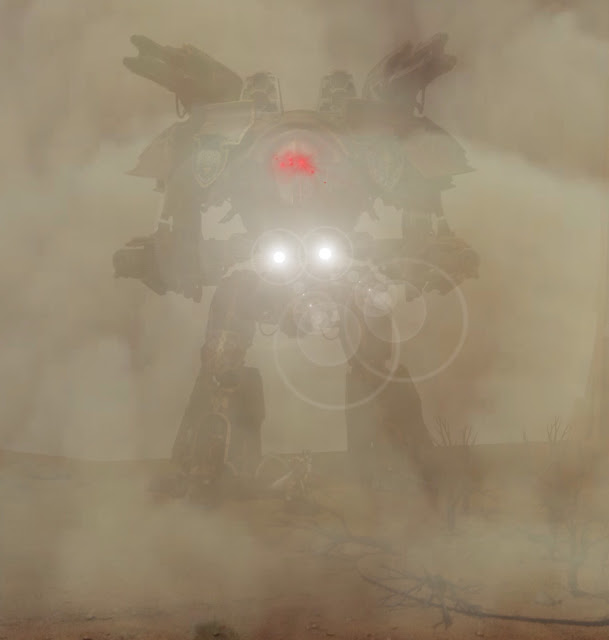 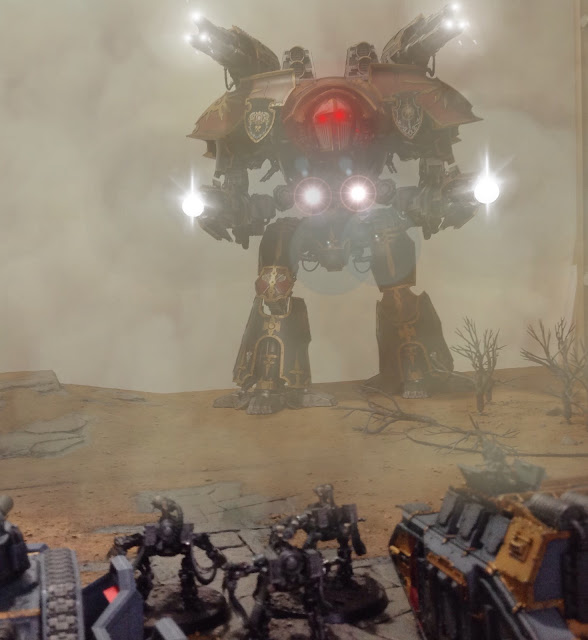 Welcome to our fourth Battle Report of the Fall of the Purokar League. This is the result of Mortarion's wrath when he finds out that Nathaniel Garro is missing.

Turn 1
The Purokar League fire everything they have and in the most sensible order trying to strip void shields down before the bigger guns can start to dent the armour. They manage to take down five void shields before Bone Garland's weapons reach their crescendo. 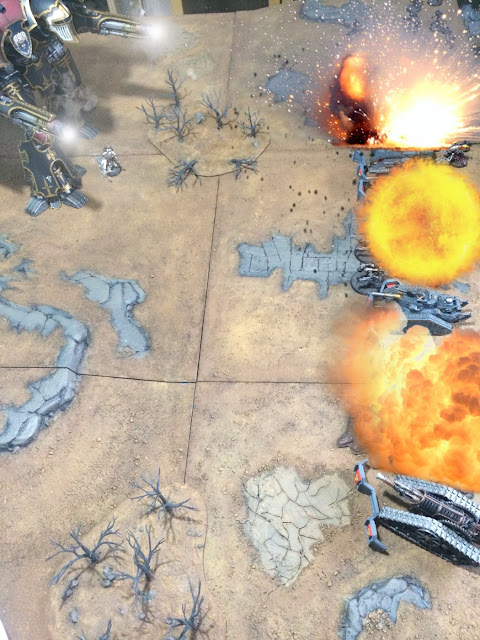 Both Bunkers fall immediately one totally wrecked the other explodes catastrophically. A Leman Russ is destroyed and damage is taken across the board, still the defence lines hold back some of the damage.
Bone Garland regenerates 2 of his lost void shields. 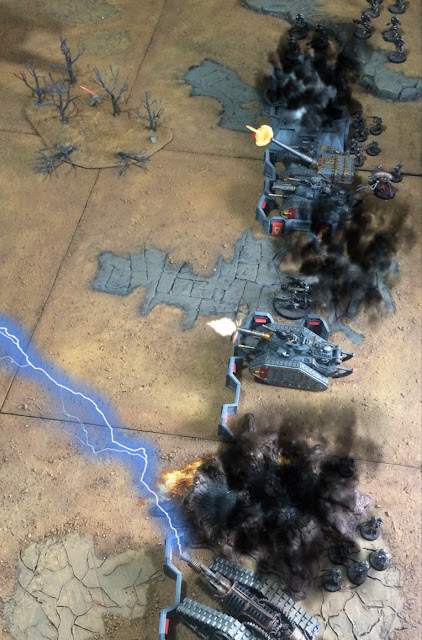 The tanks fire for all they are worth knowing that to run is just a surer death. 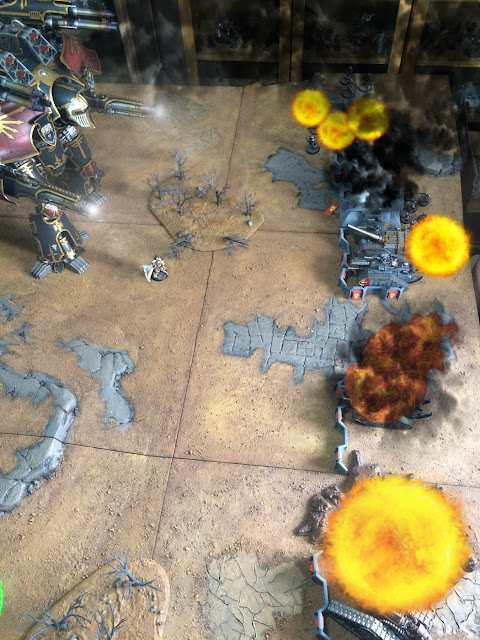 Bone Garland continues to lay waste to the field. The Southern Solar Auxilia cease to exist and several Thallax are metlted by Reaver Las Blaster fire. The standard Leman Russ is immolated and so is the Puroti Magos Dominus.
Another Void shield is regenerated.
Turn 3
The Medusa and Leman Russ Incinerator do a little more void shield damage before Bone Garland is ready to fire again. 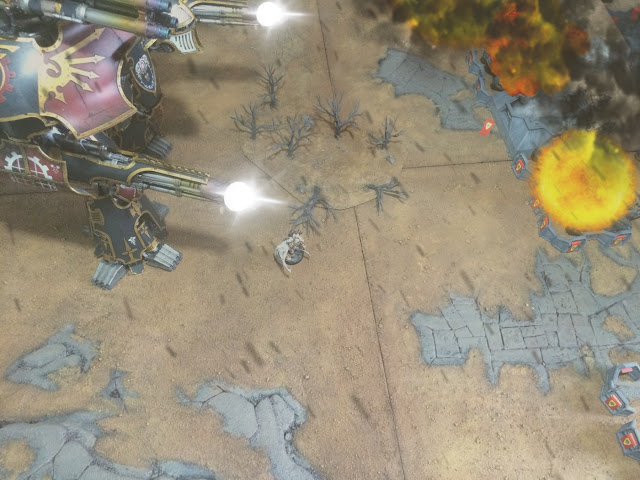 He totally obliterates the field. The final Puroti and Kuskar Steel Guard fall or surrender. Mortarion does need to ask them a few questions. . . .
Everything burned. Larama watched as the figure of death strode through the blizzard of embers and ash towards him and his men. The man was almost three times his height and went bare headed something which he couldn't believe. Piercing powerful eyes didn't blink as they bore into his own through his visor, locking him in place as he approached him.
'Raaaaarrrghhh!' a Steel Guard screamed and charged the giant, thrusting his lasrifle mounted bayonet into the monsters chest armour. Without breaking stride or eye contact the robed man grabbed the top of the troopers helmet and wrenched the visor totally off his head. Trooper Merin was revealed as the insanely brave or stupid man whose death had only achieved a glancing hit on the revenant's midriff, his pink face blistered instantly and started popping as he screamed silently.
Larama tore his gaze away from his melting friend back to the man as he came to stop two metres away.
'Where is my Battle Captain?' the giant in brass armour rasped as he lent in closer.
'He's', Larama stuttered, trying to hold back his fear 'he's been taken to the Jiikan palace!'
'Thank you,' the hooded figure said from cracked and wrinkled lips, a split second later and he was flying through the air. Larama spent the last few seconds of his life realising that his head was no longer attached to his torso and staring up at the enormous Battle Engine which had conquered a valley. 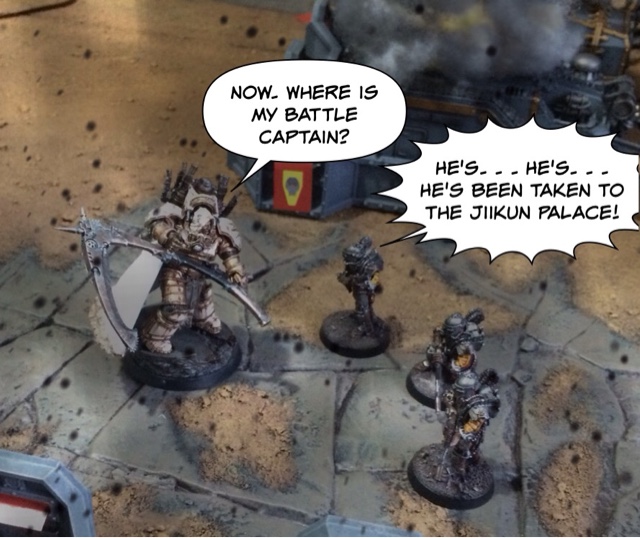 Thanks for reading.
Drake Seta
Posted by Drake Seta at 18:31