So over the last week we have been putting up army overview and future project updates, its now my turn! :)

As I am sure many of you have seen I am the groups Iron Hands player and eventually the Blood Angels player. I've been working on the Iron Hands since I started in the heresy setting and I am now beginning to feel like I am heading towards having a finished legion. I began by buying models I wanted to paint and models that I thought were suited to the Iron Hands, so as you have seen on the latest battle report they are not particularly competitive from a gaming point of view. However, the Iron Hands did perform very well against Kaelo and his Raven Guard in some friendly games before the throne of skulls event!

I will say that I am like most people in the hobby hampered by money and time. This is why I don't have a top of the range camera or display board! I'd rather buy more models ;). Below is the best I could do towards fitting all of my legion in a photo! 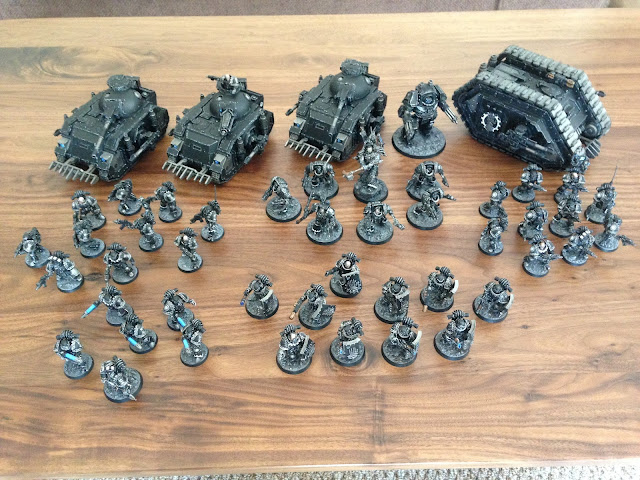 I am looking to add to the army soon with five more Gorgon Terminators being next on the shopping list, I will be looking to take on your advice on what weapons to arm them with too and on how to use them effectively in future games!

Below are a few of the best close ups I managed to take before being called into work! 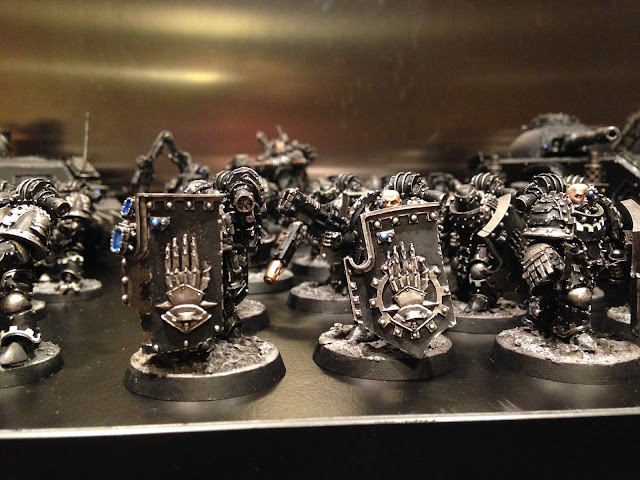 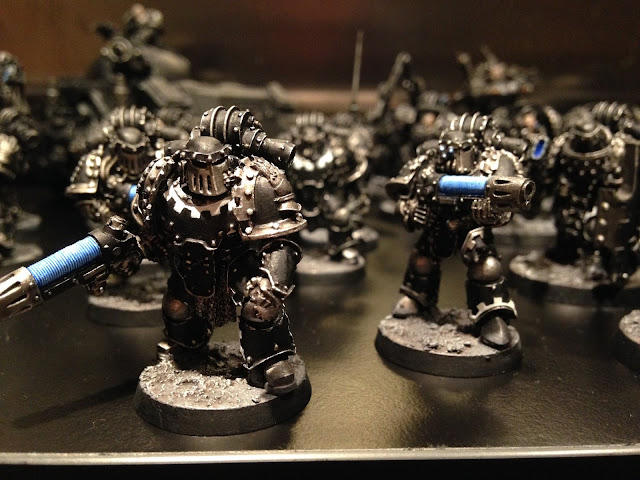 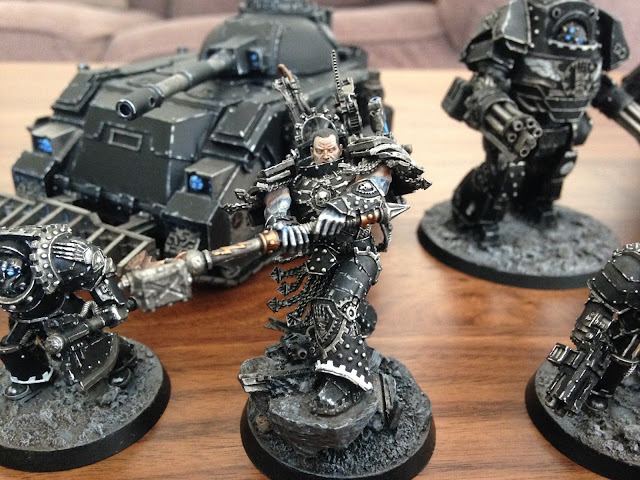 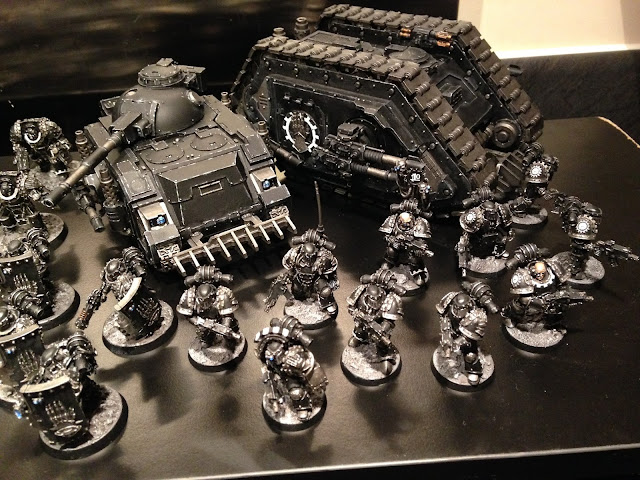 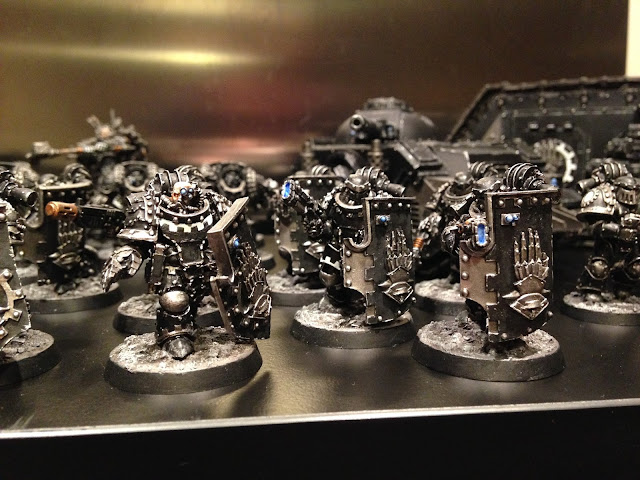 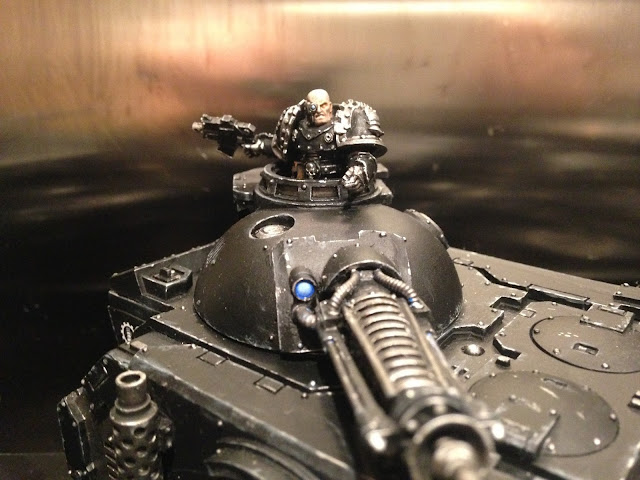 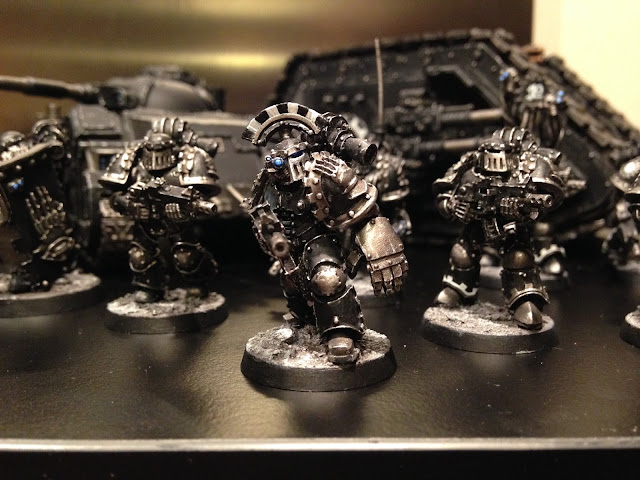 I am currently working on a second contemptor with dual lascannons, I just have a couple of white details to do and then its onto transfers and the dreaded purity seal. I still have a lot of other transfers to complete, particularly on the predators with their turrets being the difficult part to get right. There are also other effects to finish on some weapons too when I get around to it. 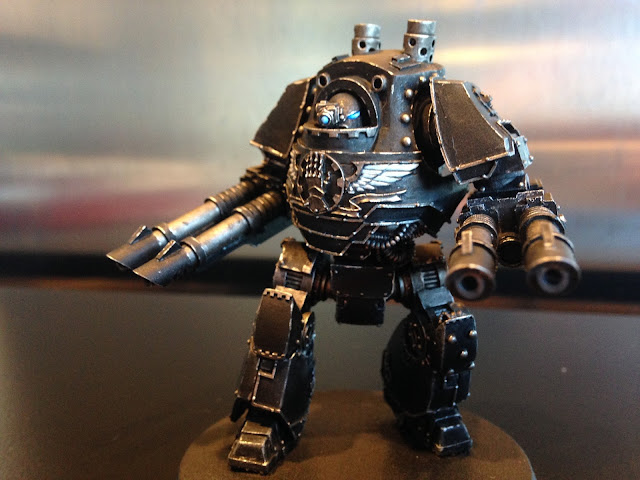 In terms of what future projects I have on the way, it will be Blood Angels next once I have finished a few more units for the Iron Hands. These will most likely be the Gorgons, another contemptor and a unit of heavy support marines. As you can see from the picture below, I have invested in the battle at calth box set for the cheaper marines, but will not be cutting corners on the legion specific heads, shoulder pads and bodies! I do like to give them character and will have them looking regal. So it shouldn't be too far down the line before I start to work on a few Blood Angel units and testing out a paint scheme for them. 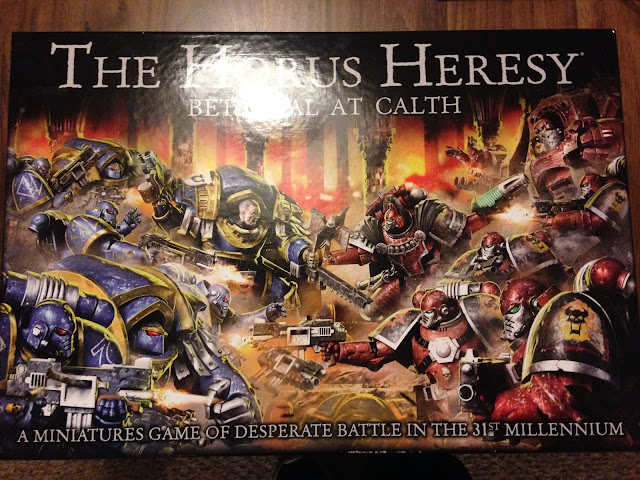 In terms of other projects I have going on, I have been tempted like Kaelo and possibly Darien into a little bit of AoS, with the nice looking new models being released. Other than that we are looking at getting into the new version of Blood Bowl when it is released! Again this all depends on money as I have been spending far too much on warhammer to bare thinking about!

So I hope you liked the insight into my current and future projects, I am excited about starting the Blood Angels but want to mostly complete the Iron Hands first so they can compete better in a our future games.