As you may have seen from my last post, I am the blogs Blood Angels player. The Blood Angels have probably always been my favorite legion and Sanguinius my favourite primarch so I'm really looking forward to eventually starting them!

I am stating to think about planning a scheme for them, but the photo below is pretty close to what I would like to achieve.

*For the record this isn't a model of mine, but its definitely a lovely model in pose and scheme so credit goes to the painter Gray Area over on the Heresy 30K blog :)* 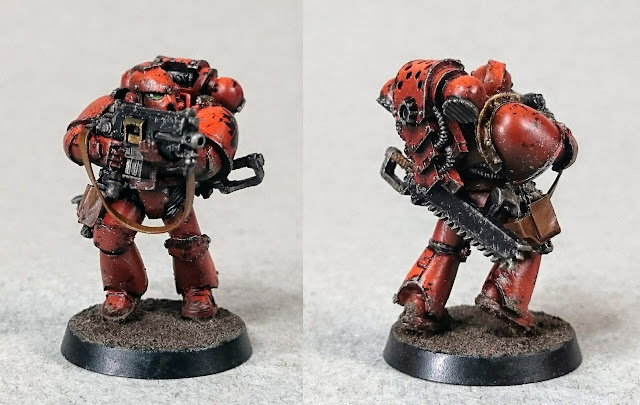 It definitely captures the darkness of the Horus Heresy and although I do like the idea of the blood angles looking clean and regal, I do think I will be going for a similar battle worn look.

However, before I start a scheme I should really plan the initial units I am considering including in the army as well as learning how the legion likes to fight! Some really nice 30K Blood Angels artwork above which I think captures the legion nicely!

So without posting the rules for the Blood Angels on the blog, they are obviously intended to be a rapid assault based army with plenty of close combat potential. The special rule for the legion Encarmine Fury represents the benefits of having the legion as an assault based force and the Rite of War: Day of Revelation in a nutshell gives you the ability to gain a cover save after deep striking and added initiative when charging into combat!

I have the 30 marines out of the calth box set which I will use to make tactical/despoiler marines and then I have been looking forward to working on some Mk IV assault marines for a while now so I think they will make an appearance! With an assault based theme to the army I think I will make twenty of the thirty marines into despoilers and maybe have one standard tactical squad. Other than this I am not particularly sure what I would like to include. Some terminators, dreadnoughts and a flyer will probably be added but I'm really looking forward to the release of the legion specific units.

So this post was really intended to ask the community, how you think the blood angels should play and what units both fluffy/competitive you would include in the force?

Also what do you think the legions special units will be? Another version of the Sanguinary Guard?

Just comment below as I am interested to hear anyone's opinion whether you have a 30K Blood Angels army or not :).