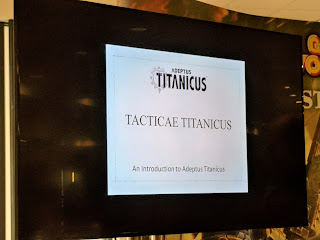 Apologies for the lateness of this post. I intended to post this yesterday evening soon after the demo pod but I was plagued by scrap code and encountered a few technical issues as a result. After some prayers, incense and a full system purge, here we are, ready to share what we learned yesterday in the presentation. I also apologise in advance as some of the slides were completely unreadable due to the screen resolution on the monitor so don't worry if you can't read it, it's not your eye sight, we couldn't read it either!

First of all, it is worth noting that this was a high level overview on the game rather than previewing models etc as that was covered in the Specialist Games Q&A seminars so no huge reveals about upcoming titan releases beyond what had already been shown.

The presentation was split up into three parts: 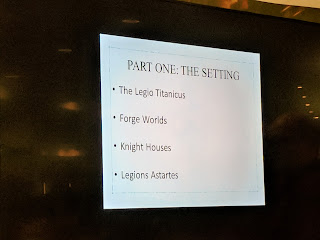 There wasn't much here that was really news to me but a good refresher all the same. The game is set in the Horus Heresy so the game will be focused around the titan legions and knight households kicking around during that time - it is worth noting that for titan legios this actually makes them more flexible as a lot of titan legios got wiped out during the heresy and there aren't many left in the 41st millennium so you have more choices here as each legio should end up with their own rules.

At least in the short to medium term at the very least, it will be focused on loyalist vs. traitors so do not expect any Xenos titans to appear in AT any time soon. Also, do not expect any units smaller than a knight titan in the game either, there are no plans for AT to evolve into a new version of Epic as they feel it made the ruleset very cumbersome and they really want to focus on titan combat. Legiones Astartes was only mentioned on this slide to highlight the variety in legios point as you have the inverse situation between 30k and 40k with legions vs. chapters and the fact that they are in the setting but will not be in the game itself. 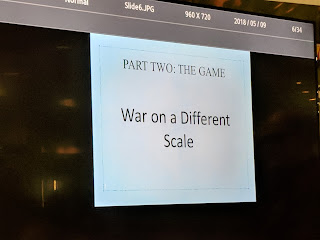 In this section, basic game play was discussed here. One of the key mechanics is that you need to give your titans orders at the start of a given turn - for each order you make, you need to pass a command test to see if the command succeeded, if you fail then you can not make any further commands in that turn. This is important as in the event that you do not give a titan an order, all they can do is their default basic move and shoot actions which could potentially leave them vulnerable so the order in which you give your titans orders is incredibly important - its like how player activation order can be important in BloodBowl!

The size of the titans can have a big effect in the game - carapace weapons have a minimum distance statistic for the event that they are firing at a smaller titan so you can effectively halve the firepower of a warlord titan with a reaver titan by getting up close and personal and force them to back pedal. Also, the new AT boards that are being released by Forge World are deliberately designed so that they can be set up with roads that can not be traversed by larger engines to give some tactical advantages to smaller engines. 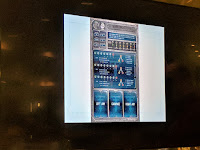 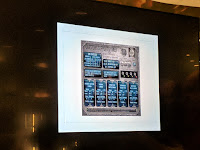 We also got a bit of an introduction to the command tiles for Warlord Titans and Knight Titans - the key thing is void shield and reactor management - if your void shield bursts or you overload your reactor things are not going to go well for your titan as they will be incredibly vulnerable to damage and will potentially start taking critical damage which will reduce the titans long term effectiveness (mobility, firepower, structural integrity, out-right engine kill...). 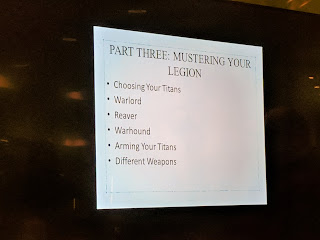 Here we got an overview of army composition, the roles of the different titans that will be available soon after launch and how they can be armed.

In terms of maniple composition (which is the key thing here), this is what the command terminal packs provide. The command terminal packs provide you with a maniple composition amongst other things - for example, the Axiom Command Terminal pack provides you with everything (apart from models and weapons cards) to field a pre-selected maniple consisting of 1 warlord, 1-2 reavers and 1-2 warhounds. If you build a maniple that is compatible with the terminal pack you can get extra rules such as improved command rolls - so think of them like formations but not as game breaking as some of the ones in 7th. 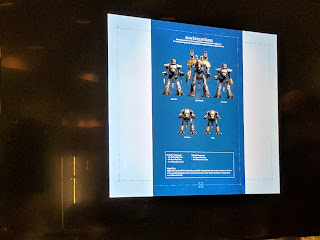 The titan roles should be pretty self explanatory really - Warlord is a slow but resilient heavy hitter, Reaver is a middle of the road kind of titan, Warhound is a fast glass cannon, Knights are flank protectors and irritants - don't ignore them though as they can take down an injured titan caught off guard!

Weapons are important here as you need to have a balance between shield breakers and engine killers, too much of a focus either way may result in you not being able to quickly take down enemy titans.

I hope this was useful and if you have any questions about the content above I'll try to answer your questions in the comments below!