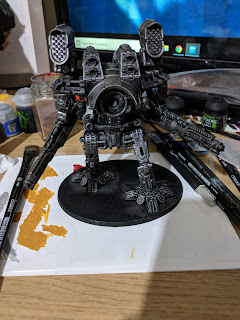 My original plan went out of the window with the rapid release of the Reaver titan plus my sudden keen for LoTR again - I'll blame the guys at Ibuywargames for that one, that practice game you guys did reminded me how much I enjoyed the Hobbit!

Anyway, the upshot of this is that while my time spent painting my warlords dropped, I have managed to get a good couple of days building Reavers this weekend. They aren't done yet which might surprise you until you see why... 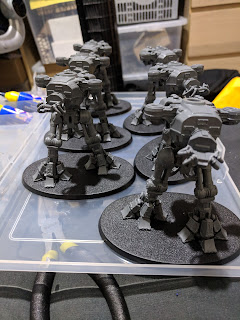 Yup, that's 6 of them, spent an awful lot of time tidying up the bits before building them however I think I saved a lot of time by building them all at the same time. The way I went about it was building the individual bits of the legs (lower, upper, pistons, crotch, feet) and used an organiser box to well... organise... the bits. This also meant that rather than dealing with a single Reaver at a time and therefore thinking at each stage how I need to position one Reaver, I could instead consider them all at once and make sure that I mixed it up with the poses etc. 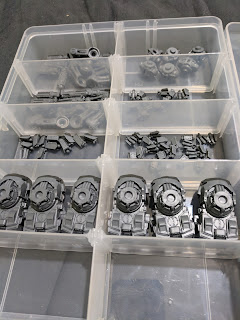 As the build progressed, the contents of the box evolved. Torsos gained shoulder mounts so I had to remove some of the dividers to make room for the larger parts, legs got assembled so I gained room for the weapon arms, and so on. In short, my whole build process was centered on this single box - helpfully avoided the anguish caused by the dreaded "part 23" that I'd heard about on Facebook and it kept me focused on each individual step of the build so I didn't miss anything else in the process. Also, speaking of awkward parts of the build - if you have big hands, make sure you have tweasers available to you as the leg cables can be very frustrating to glue into place correctly to not impede other cables and not knock any other cables out of alignment. 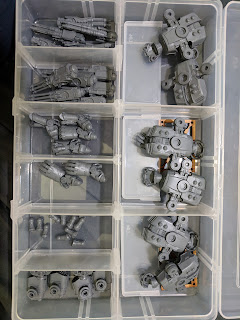 That's pretty much it for now - just waiting on some smaller magnets to arrive and then I can get cracking on with magnetising and then priming these Reavers.