I've been a busy bunny over the past week or so since my last post. As you can see below I've built and magnetised all of my warhound titans. I used a similar approach to how I batch built my reavers and it really helped - I still maintain that the box I bought is possible one of my best hobby investments as it's cheap and really has revolutionised my building process so I build everything at the same time so I can plan different poses for the models at the same time and so on. 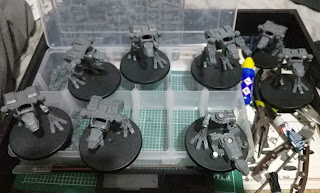 In terms of magnetising the models, I magnetised the elbow joints of the arms by cutting the ball joint off and gluing a 5x1mm magnet on the resulting flat end of the arm - there is a nice recess in arm immediately above the ball which you can use as a guide line for the cut which was incredibly handy. The weapons ball sockets have a nice little ledge inside where another 5x1mm magnet can sit so it makes it easy to glue in place despite the spherical socket.

I also magnetised the model at the waist. The waist can fit 2 5x1mm magnets inside so you can glue one in there and then a second on the torso - the trick here is to glue the magnet dead centre in the torso recess and it should slot into the gap in the waist to connect with the first magnet. Just don't forget your lolly pop st- I mean magnet guide! 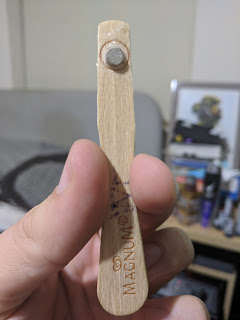 I'm really looking forward to getting these painted up - I think as I've magnetised the waist and the weapons I should be able to get at all the details on these models.