For a quick change in pace, I've decided to cover some of the new techniques I've learnt working with green stuff. I've never been particularly good working with green stuff in the past - always impatient, naturally wrecking anything I attempted to touch up and as a result, every conversion you will have seen by me on here was entirely free of green stuff... Until the other week when I showed my standard bearer in the WPR. 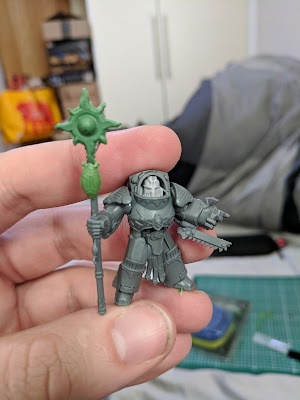 Did I suddenly become a great sculpter overnight? No, my army consists of wizards but I'm not nearly as capable. In short, the answer is in two parts:
So with the above in mind, I cast the thousand sons serpentine star from the top of the dreadnought and the scarab on its chest plate. The scarab was on a whim and highlighted how easy it is to work with as it was only 10 minutes after having the idea of adding the scarab, I had a mold with some green stuff pressed and setting within it. 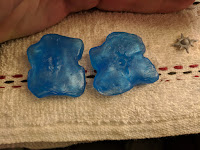 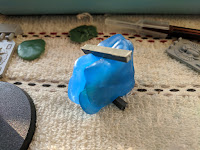 Casting the star was an interesting test as I had to create a two part mold. I've seen tutorials about this online but most involved power tools and creating a frame to hold each part of the mold - I didn't have access to anything like that but what i did have was spare sprue bits to use to line up the two parts so it sits and sets correctly.

Once that was solved, it was quite easy: 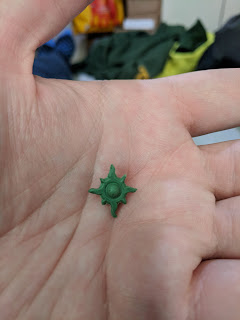 In the end, after a little bit of tidying up, the result was what you see above. I'm quite impressed as it was easy to do but I would not recommend trying to do anything in bulk as it is ultimately quite time consuming waiting for the green stuff to set.

The other technique is quite a simple one and that's using textured rollers on green stuff: I used one with Egyptian designs on it and the result pretty much speaks for itself. I'll be using bits of the above on my bases. If you are planning on using textured rollers, I have a couple of tips:
I decided to experiment with other materials too for my bases - I settled on using air drying clay. It is a lot more variable in setting time as its reliant on water evaporating from it for it to harden and the bigger the item, the longer it will take unlike greenstuff which is a bit more consistent. You can use it as-is and if you accidentally dry it out, just add water and it will start reactivating it. 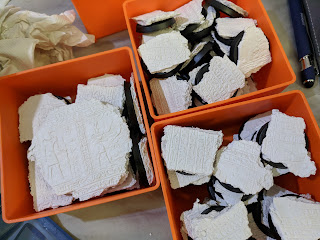 The results are pretty much the same which is great - I'll be varnishing my models prior to painting to effectively waterproof them.

I hope that this has been informative! Does anyone here do other things with greenstuff? I'm deliberately trying to learn more with this project than I have with others and I'll be interested in learning of other things I can do.