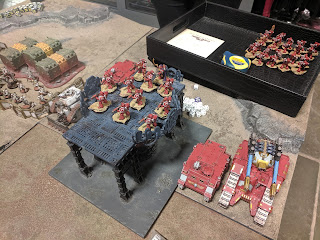 Our team up of Thousand Sons and Solar Auxilia ("Athanean Rhapsody") unfortunately ended up not winning a single game at the Throne of Skulls event last weekend.

This surprised us quite a lot as I think overall the list we took worked alright - a couple games there were clear cut winners whilst others it went right down to the wire and I'm pleased to say that we enjoyed every one. There were some really fantastic lists - such as the World Eaters and Iron Warriors pure infantry list we played in our first game which highlighted how terrifying the World Eaters can be when they have long range back-up and the Talons of the Emperor and Alpha Legion list in our final gamd which I quite liked as that was the first time I've seen Sisters of Silence on the field combined with Alpha Legion forcing us onto the backfoot with some clever infiltrations. 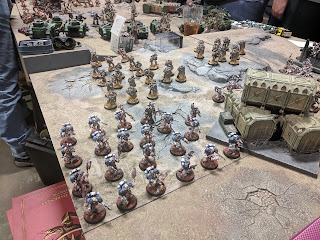 If you've considered going to a Horus Heresy event at Warhammer World but have been put off by the idea that people will bring win at all costs style armies, don't be too worried about that and come and play! These aren't like grand tournaments so you don't see many armies like that, the community is fantastic and do it for the love of the hobby and the setting. We lost every game this time but we still very much enjoyed it and we will definitely be back for the next Throne of Skulls whenever that will be! 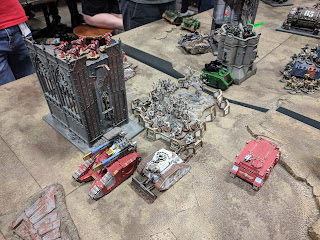 Now, despite this, I'm going on a bit of a gamer focused tangent as this was the first time I really played Thousand Sons (my first game with them was on Friday afternoon to refamiliarise myself with the psychic phase!), I'm going to do a critique of the units and how I played them and what I'd do differently now that I've got a better feel of the army rules - its one thing to know the effects of things but actually experiencing in a game is quite another (failing self-inflicted pinning tests in the psychic phase really hurts!!!). Before I dive in proper, here is a reminder of the army list: 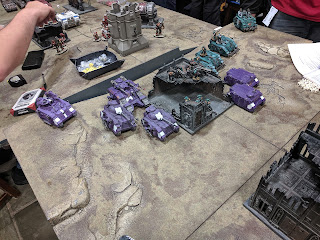 I'll start with my Sicaran Omega Tank Destroyer - I got this tank because it looked really cool but I think I gave it way less credit than it really deserved. Don't get me wrong, I think there are definitely better tank destroyers than this one but this wasn't a slouch when it came to making an impact early game. My main problem is that I brought it as a "distraction carnifex" but really it was just a "carnifex" - whenever I lost it (turn 1 normally, otherwise definitely gone by the end of turn 2) I really missed it as my army lacked that punch. Given my experience with this tank, the changes introduced in book 8 (aka, making it cheaper and also able to squadron up) make so much sense and I think you really need to make use of squadrons to get the best out of them.

My volkite squad was effective but not in the way I was expecting it to be - it took out a World Eater Assault Squad in close combat! In terms of their actual purpose though they were ok - I think a more complimentary Cult Arcana would have really helped them out here (a.k.a. Corvidae) as they were a very static, sit and hold an objective unit. Overall, they were useful and effective but more often than not i needed them to be filling another role instead - I may have been better taking something else instead such as a squad of terminators and have my Delegatus join that unit instead. 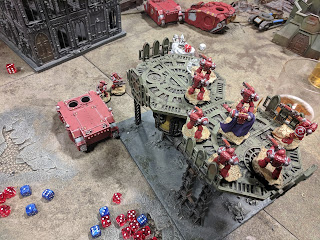 My Delegatus was pretty good whenever I needed him to step up to swing a combat in our favour but ultimately was anchored to the volkite squad due to my army composition - in hindsight, I would have made room for him to join one of the veteran tactical squads and maybe give them apothecaries too or otherwise as mentioned before put the Delegatus in with a terminator squad and advance them up the table with the rhinos.

My veteran tacticals were great - I would change their loadout a bit though. I found that I seldom needed the meltabombs (I simply wasn't getting up the field quick enough to be decisive with them and we had other more options to cover that role) and probably would have been better off with extra armour on the rhino and asphyx shells on them to improve the quality of their shooting. Corvidae would also help here (as they have access to Divination rather than the cult rule itself) but I didn't really regret choosing Athanean as them having access to Psychic Scream helped them punch above their weight against high toughness units. 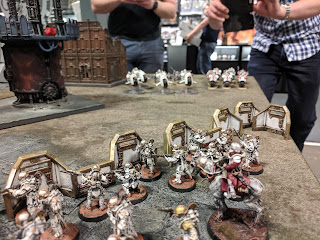 I found that with my army, I had quite a low risk of getting a Perils of the Warp and it only happened three times over the weekend:


Very much feels like a low chance but high impact rule, I was expecting it to happen more frequently than it did but not be as impactful; getting pinned in your own psychic phase is utterly devastating as the effects last until the end of your following turn! 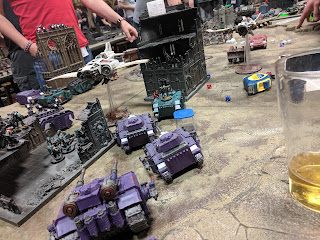 All in all, I really enjoyed the army and I want to do more with it. I feel I made my list like it was one of my Imperial Fists infantry lists and expected it to do as well as them. Its not how they roll and I'm looking forward to the hobby challenges I have and the weird and wonderful things I can do with the Sons of Prospero which I haven't really been able to do with my Fists or World Eaters!