Hi all.
Since I was a little Bunny my favourite Chapter has always the Space Wolves. It was since I first laid eyes on them on the side of the Original Space Hulk box. A beautiful, beautiful grey.
Then GW released their codex, the Blood Claws, Ragnar etc and it seems that my favourite Chapter had changed its colours. A cyan / Blue grey was what I was given. It upset me a bit but I continued them.
Then over the years I try to keep on top of the Space Wolves even after GW made some frankly stupid and terrible choices to their aesthetic and style. I hate  Space Wolves riding Wolves, I hate the sled that Grimnar rolls round on, I hate the muderfiend dreadnought, I hate Loki, I hate the weapons made from ice, I hate the new Wulfen. . . I hate 40k Space Wolves and would go as far to say as GW ruined my childhood memories.
Now; that is the last you will hear of the Space Wolves.
The Vlka Fenryka on the other hand is the beautiful savage grey future that the Space Hulk box promised. It is the last thing on my long bucket list of things to do, learn, see, go to before I die (true).
So thank you Forge World. 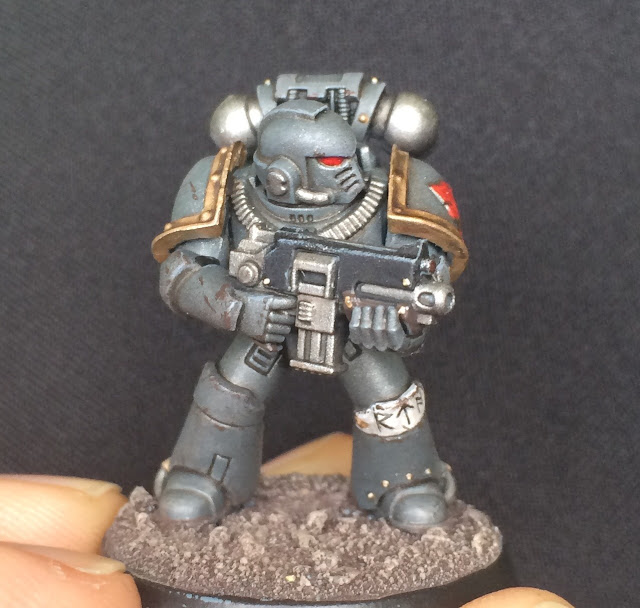 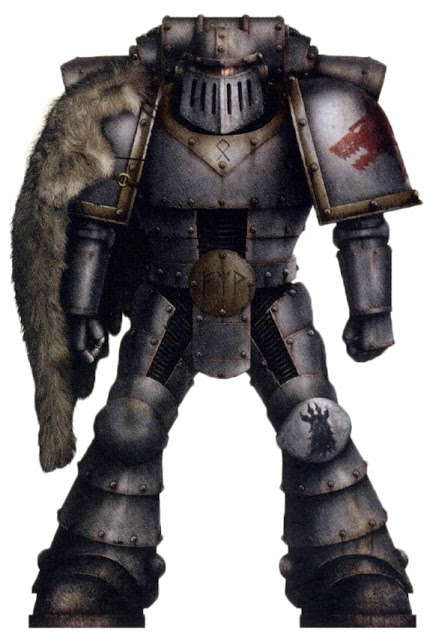 So here is the future of my past. Now just to capture it on a 28mm model.
It is by no means a flawless or perfect suit. There are many tiny dents giving it a subtly mottled effect from minute imperfections as well as streaks of rust and wear at the edges. 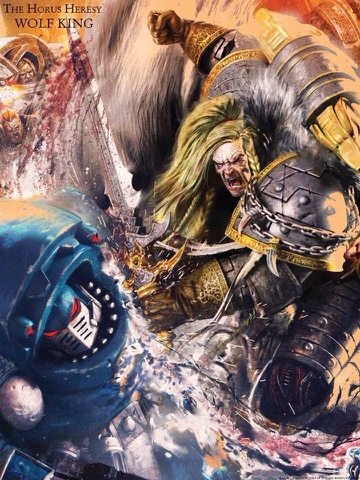 The Forge World image up top is very close colour wise to the Neil Roberts art above. 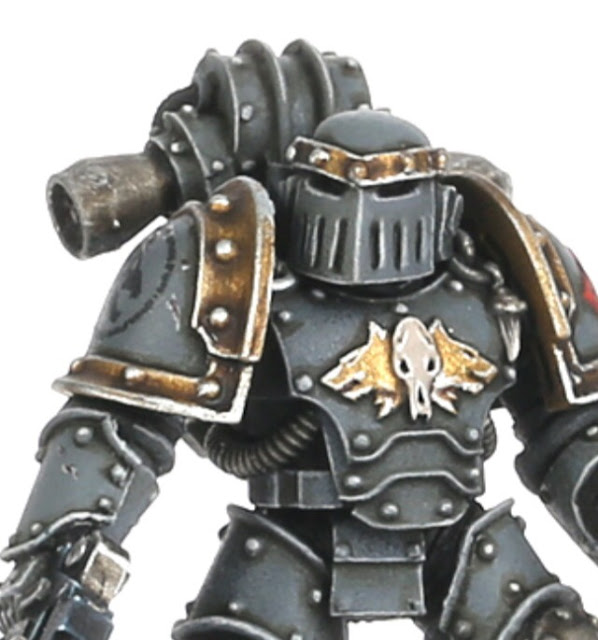 This is FW's scheme. Very nice representation and choice of grey.
So here is my first attempt: 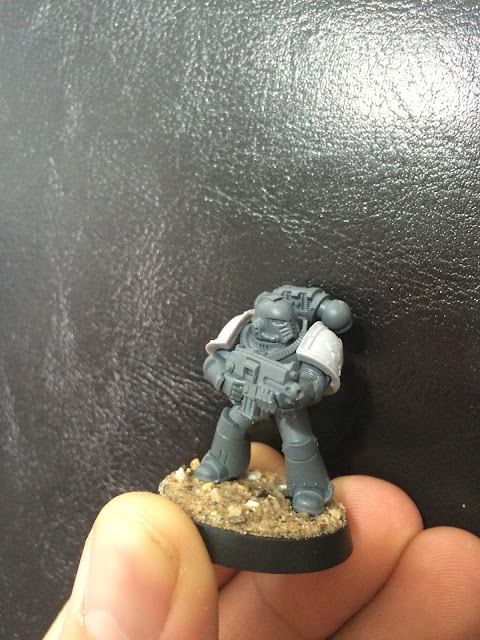 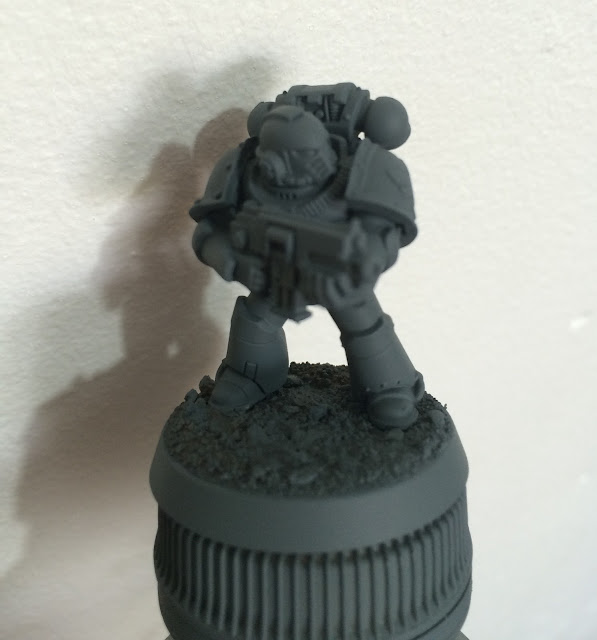 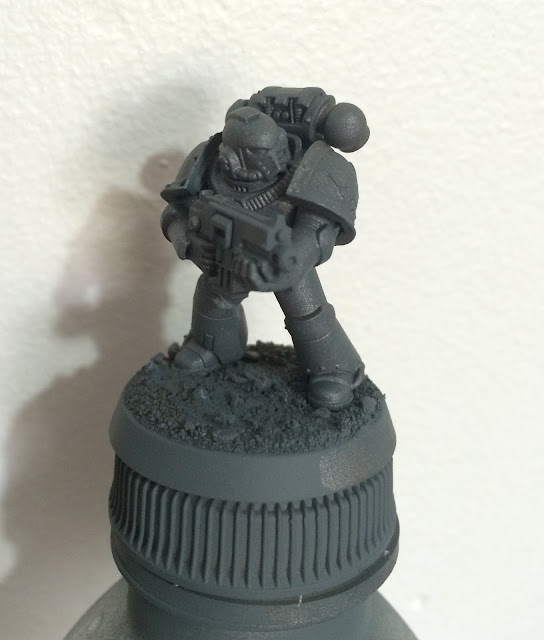 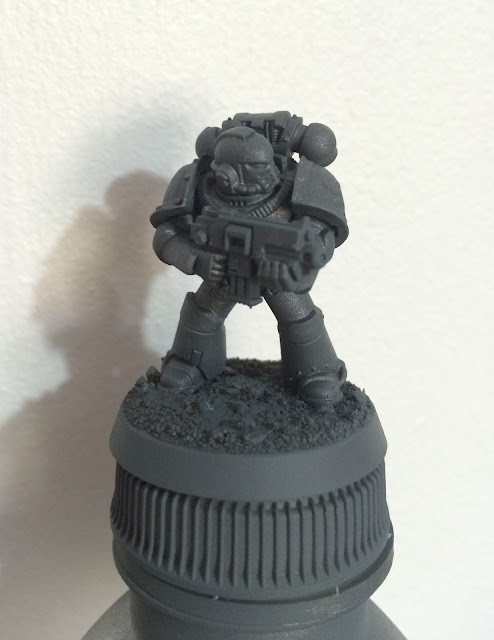 Create a wash glaze of 1:3 Leadbelcher and Lahmian Medium. 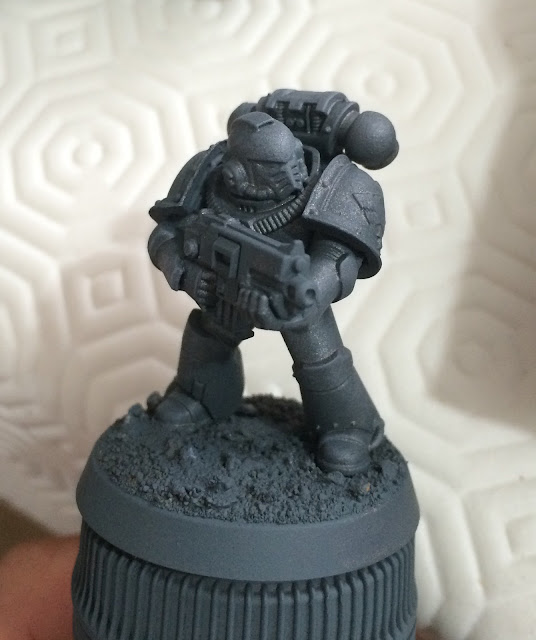 The armour panels were sponged with a 50:50 mix of Dawnstone and Mechanicum Standard grey.
The upper edges were also given a drybrush of Dawnstone grey. 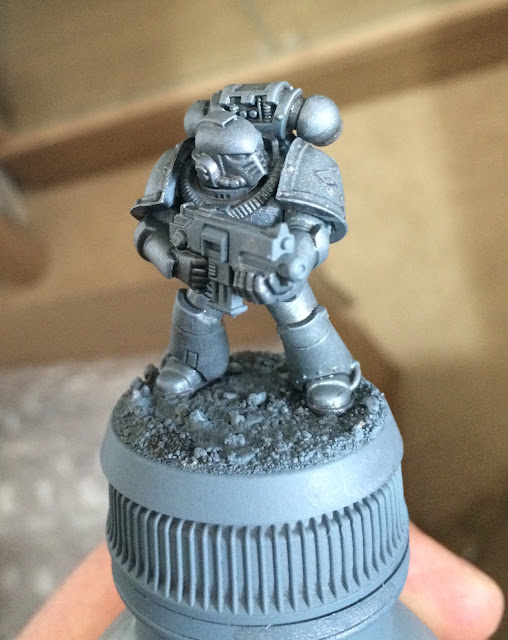 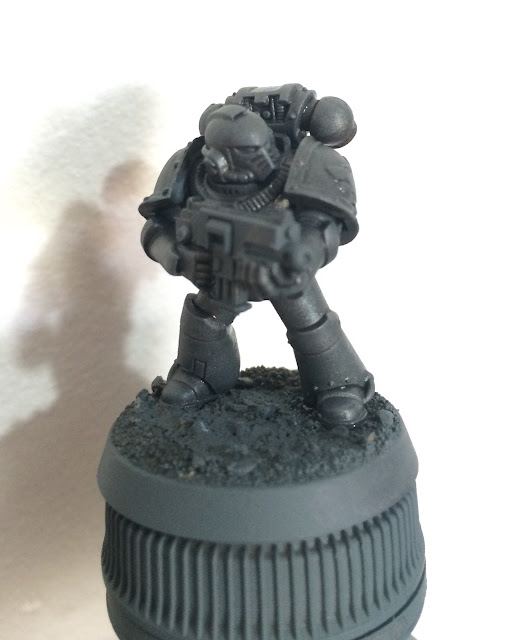 Two washes made up of Agrax Earthshade, Nuln oil, 25ml or more of Klear (an empty pot of paint filled amount) and a bit of water were applied to the model. These are drawn straight into the gaps because of the Klear / Pledge. 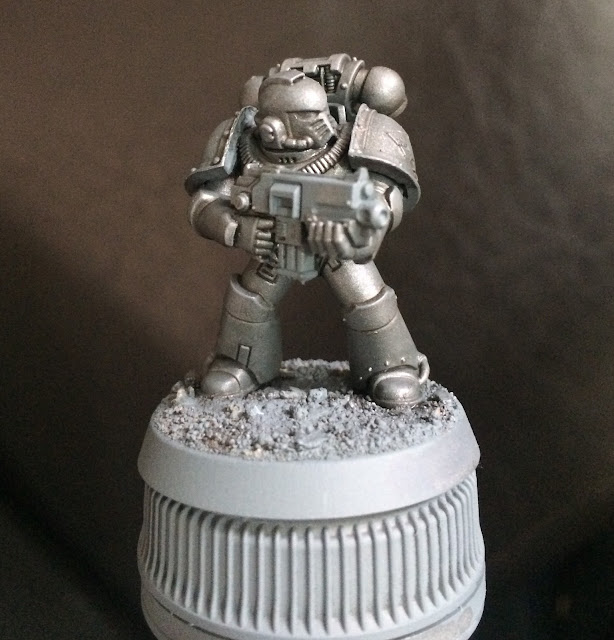 Note: this pic looks very silver but it isn't the case. You can see the Mechanicum standard grey on the gun still. 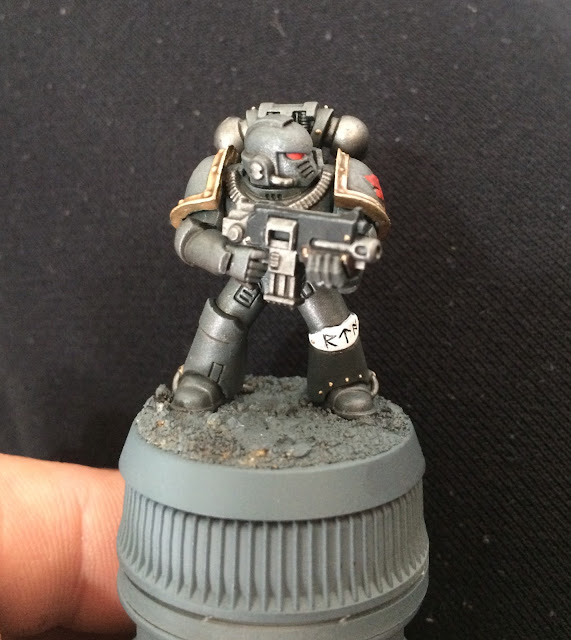 I used liberator gold for the shoulder trim followed by agrax wash.
I painted the exhausts Leadbelcher then zenithal drybrushed iron breaker.
Knee pad was painted white and some Runes were painted on with a 5x0 paint brush. 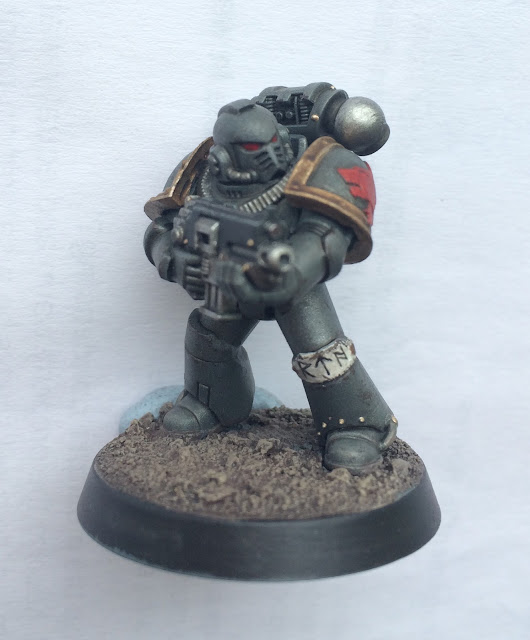 I edge chipped with a mix of 2 parts Dryad bark to 1 part Warplock. 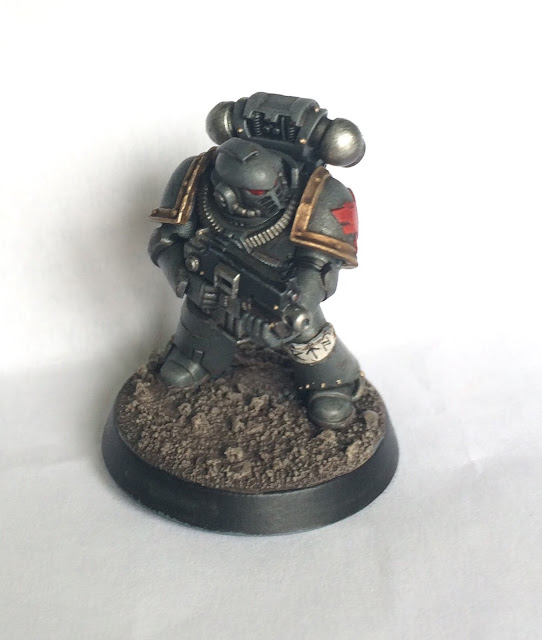 The base was painted dryad Bark, drybrushed Gothgor, lighter drybrush of Baneblade then a final drybrush of Karak stone. 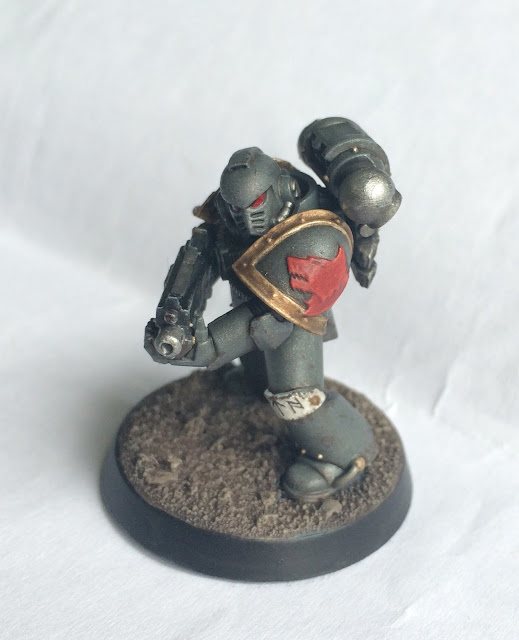 The Legion icon was painted red, washed with Agrax then highlighted with Evil Sunz Scarlet.
Got to do a bit more details on his eyes and add a holstered Axe.
Summary: when holding him up against a pic of Russ on the Calendar, the scheme is not too far off. The glaze adds a lovely natural highlight to model which ties in with the first image too. It is extremely close to Forge World's official scheme too which is nice. Also it was very easy to do on this basic miniature.
Drake Seta
Posted by Drake Seta at 09:48