Continuing with this weeks theme here is the run down of my current and future projects.

This is where I am currently up to with my First Company:

This part of my Sons of Horus is getting very close to completion now! I have 2 Dreadclaw's, Leviathan, 10 Reavers, Kibre, Ekkaddon and the Mastodon to finish for them. This army has come a long way in the 9-10 months that I have been working on them, I now have roughly 4500 points fully painted. 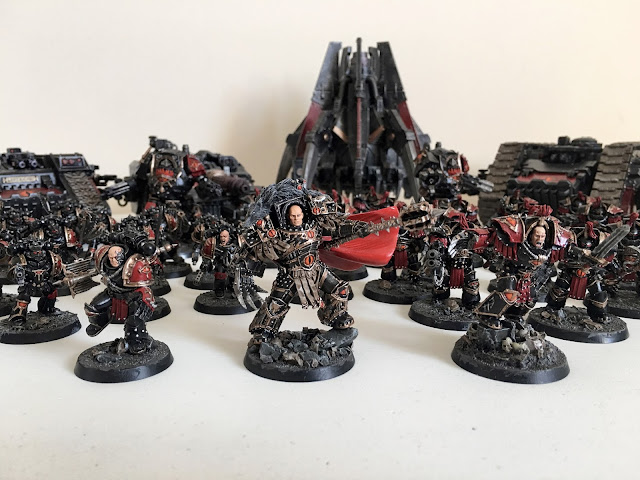 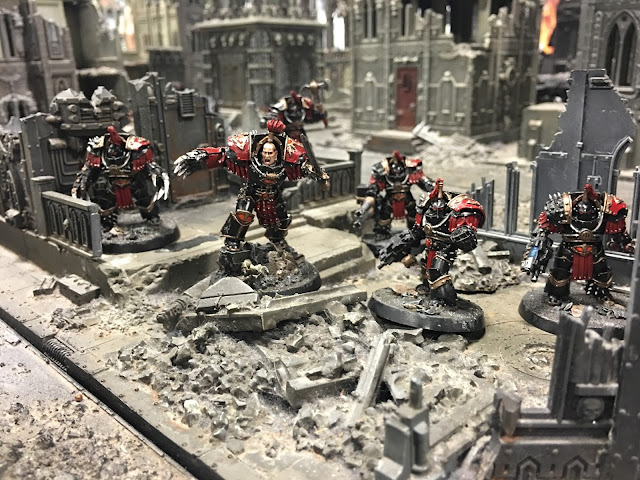 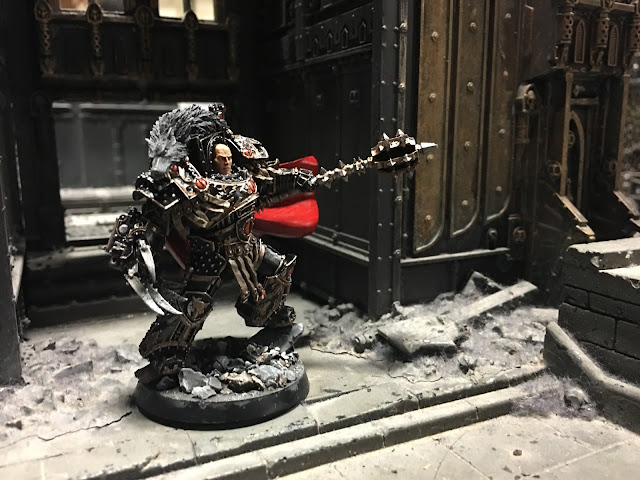 With only a few bits to finish off I will be carrying on work on them for another month or 2 and that should see them to point where I am able to move onto different legion projects, of which I have a several that I will be completing.

Sons of Horus 5th Company:
I have a plan and own most of the models required for Little Horus' company. This will be focusing on Tactical Marines and feet on the ground rather than the elite line up of the First Company. My plan is to do an orbital assault list. I have wanted to do a full drop pod army for ages and I think it will fit really well with the Sons of Horus style of war. I am not sure when I will be completing these, as I am torn between getting some of these done (to assist my Justaerin at the Warhammer World Shadow War Campaign in October) and starting my Emperors Children.

Emperors Children:
Darien Vasco's Legion and what I plan to be starting very soon. I already own around 6000 points of models for this army, which is mostly unbuilt and in their bags or boxes! My plan for them is to be a small detachment of the III legion with Darien Vasco as the force commander. They will be operating mostly separately from the bulk of the legion and conducting smaller exploratory expeditions/compliances and paving the way for the rest of the legion to follow after them. They already have their first campaign lined up, which will test Vasco's leadership abilities straight away, against Kealo's Ghost Warrior Eldar army.

World Eaters:
Once I have the Emperors Children completed I plan on moving onto the World Eaters. I have an idea of what I will be doing for them but that may change over time. I am currently planning on list focused around tactical, assault and rampager squads. I would like them to be be troop heavy and focused on hitting things!

A loyalist legion:
At some point I would like to have a legion that remains loyal to the Emperor. I am currently not sure which one. Possibly Raven Guard as they are more focused on shooting than my other 3 legions above and would play very differently to them. I had a fantastic game against a White Scars army at the Horus Heresy Throne of Skulls and they were a lot of fun to fight against and look like they would be really fun to play with!

Xenos
We Battle Bunnies are looking to fight our way through the Great Crusade and that wouldn't be possible without some Xenos to fight against. I have a few projects planned for this starting with;

Orks:
I own a very large amount of Orks and seem to be adding more on a regular basis! Here is where I'm up to with my painting for them:

I have focused mainly on a Dreadmob army list and as such I haven't painted many boyz yet! Picture above is roughly 4000 points of fully painted Orks. I have a lot more that is unpainted than I do painted!! I suspect I could put together an army in excess of 12000 points. I will be completing bits and pieces for these guys whilst I complete my legion projects, as they will be involved in Kealo's up and coming campaign with his Ultramarines. 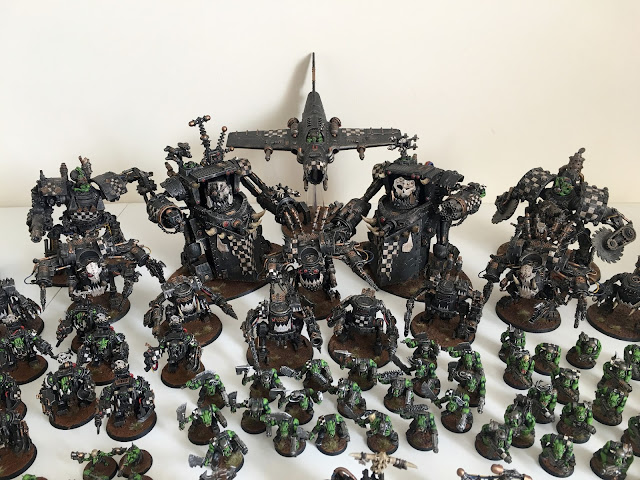 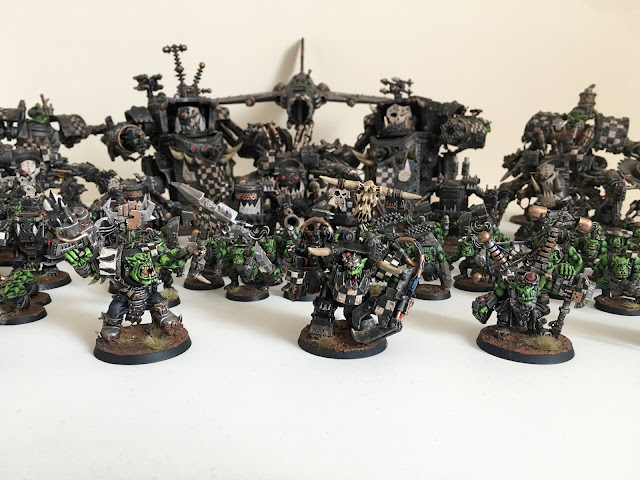 Eldar
I have started gather models for an Eldar Craftworld army as well. I really want this to be a testing army for the legions to fight against. The plan is to do a Saim Hann themed army with Jetbikes and grav tanks. I don't plan on having any feet on the ground troops. It should be a fun theme and something to put the legions backs against the wall.

Other Heresy projects:
I would like to complete a few other projects to go with the legions;
- Sisters of Silence
- Custodes
- A Knight Errant kill team style army as well and play a campaign based around Garro's audio dramas. Plus adding in additional missions to find other Knight Errants that the Bunnies create.

Other non Heresy projects:
Harlequins - I have a 2000 point army of these build and 1/4 painted. I am expanding this over the weekend with the new Death Masque box set as I have been able to make several deals with people to acquire the Harlie side of the box set! 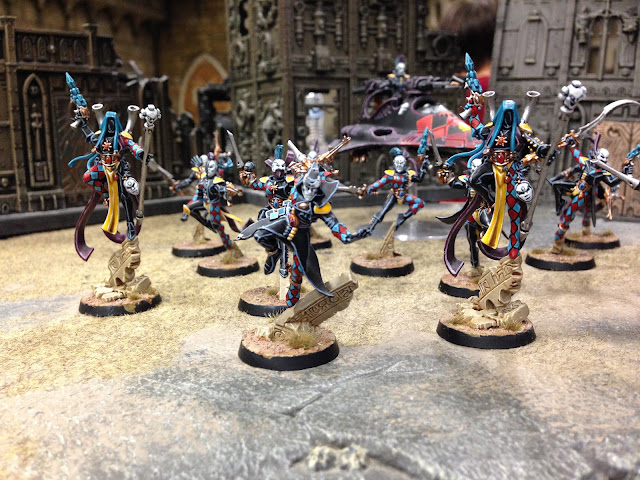 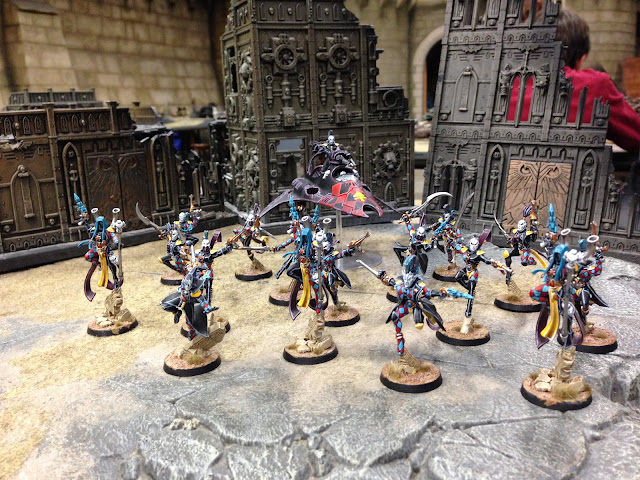 Age of Sigmar - I am getting very tempted by this game and I am keen to get some games in for it. I think I would do a Sylvaneth army as the models are awesome!

Lord of the Rings - I play this game regular with a few of my friends. It is a fantastic rule set and a lot of fun to play. I don't own any models yet as the group I play with own something of everything already! I may in the future start a small army of my favourites though.

That concludes the list of planned projects, no doubt this will grow even more over time!

Darien
Posted by Darien Vasco at 17:34