Over the weekend Kaelo and myself attended Horus Heresy Throne of Skulls to represent the Bunnies. We had a fantastic weekend, we meet some great people, saw some awesome armies, ate some good food, had a great quiz and most importantly played some awesome games!

Game 1: I landed a great draw in my first game of the weekend, I played Paulie and his White Scars at 2k. 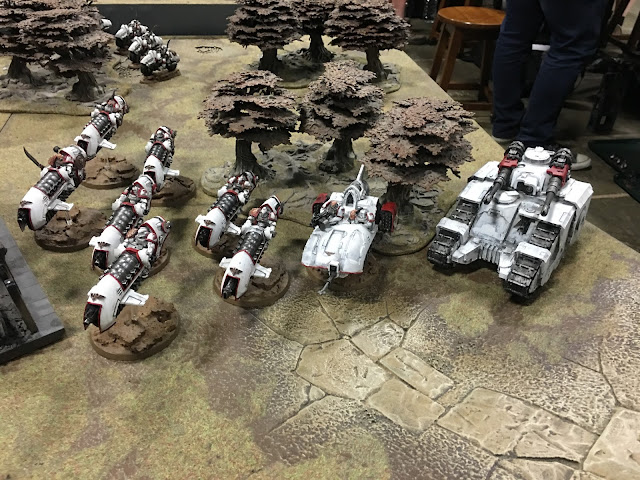 It was a fantastic army made up of jet bikes, bikes, land speeders, 2 tactical squads and a Sicaran. It was a close game and ended with the white scars taking the victory. I hadn't faced a White Scars army before and playing one was really good fun! This was at the end of White Scars first turn: 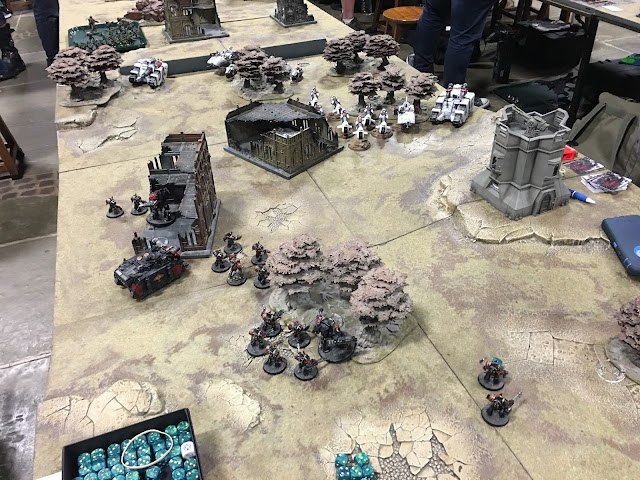 They were so fast my Justaerin didn't have much hope of catching them. The 2 White Scar tactical squads out flanked on turn 2 and came on next to one of my Justaerin squads. 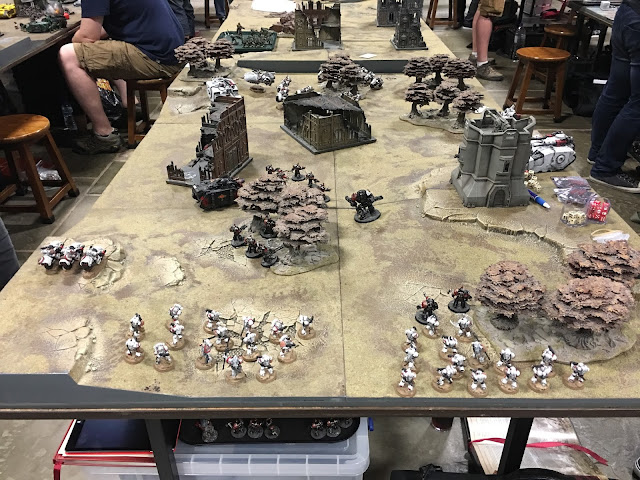 They shot at them, a lot, and I was sure they were done for after receiving 17 wounds, however it wasn't to be as I saved everyone of them!! 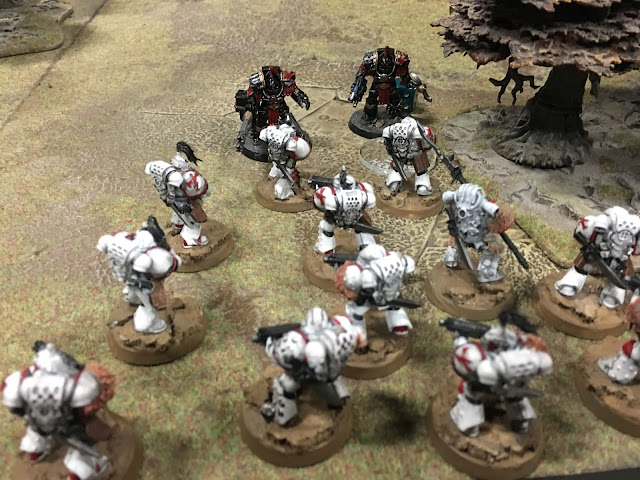 The 2 Justaerin that that survived the savage shooting turned around and set to work butchering the tactical squad, eventually causing them to run away! 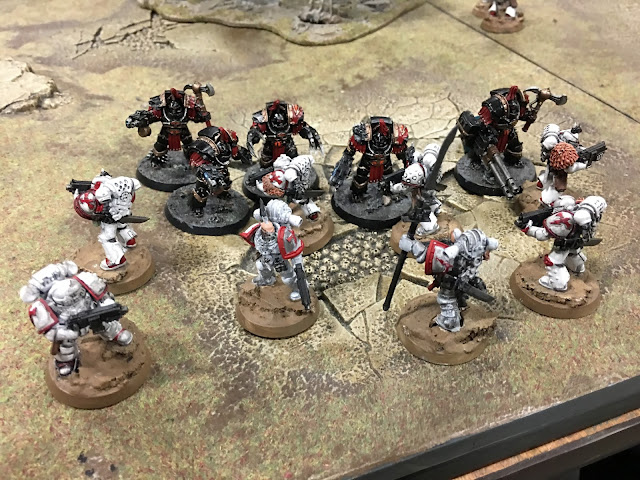 Mean while the one of my other Justaerin squads set about wiping out the other tactical squad. The game ended with a close score but the White Scars claimed the victory, their manoeuvrability really helping with the Tactical Objectives.

Game 2: This was what I was dreading coming up against. A leviathan list with 2 Warhounds with some Night Lord allies. My opponent, James, when ensure the Warhounds were packed well for travel unfortunately left his troops behind! Luckily I was able to provide him with enough models to stand in for them. We played at 2.5k and I had the feeling it was going to be a quick loss! I gave it my best shot and started throwing everything I had at the warhounds void shields so that when Horus and Abaddon came in from deep striking with melta they would have a good chance to remove some hull points. This plan fell down slightly when Abaddon failed to show up on turn 2. Horus came in though and set about killing everything he could! 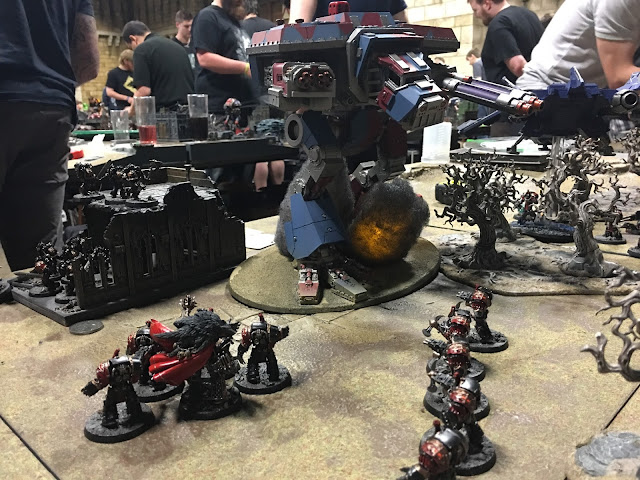 Horus landed behind one of the titans and shoot at it with everything, causing the loss of 4 hull points. His unit had to weather the storm of shooting from the entire army! Some how Horus came through on his own with no wounds. The titan in the above picture then decided to charge Horus, along with the terminators on the right (Night Lords, represented by my spare Justaerin) to finish him off. Horus on his own against a titan and 5 terminators, I suspect your all thinking what I was that that would be the end of Horus. 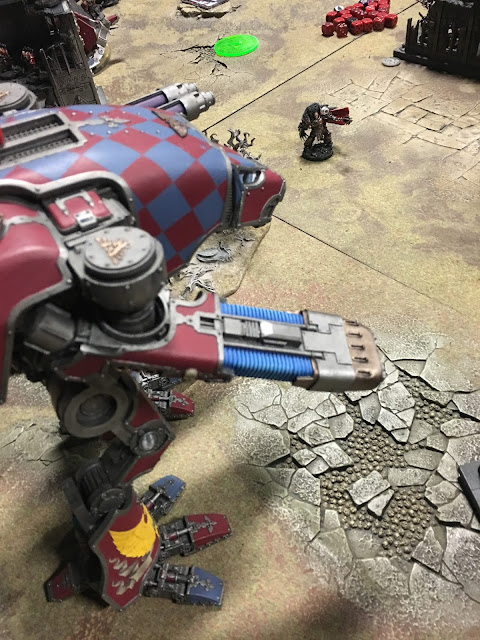 Well it wasn't!! Using World Breaker he ended the titan and sweeping advanced the terminator squad off the board, all while taking no wounds!! He consolidated straight towards the second titan! 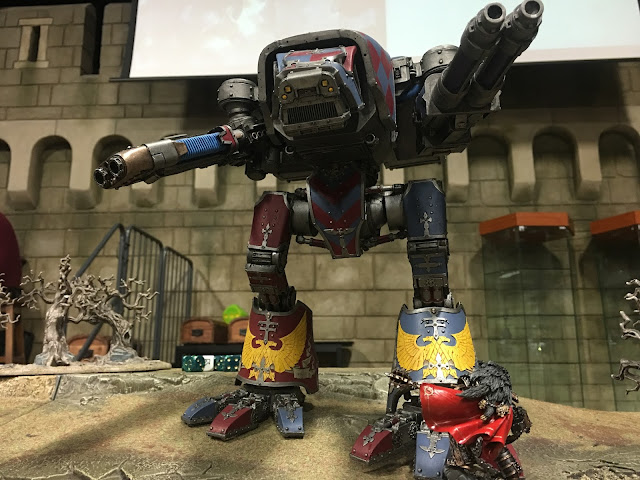 He proceeded to reduce the second titan down to 3 hull points, unfortunately you can't lock a titan in combat so it ran away and turbo lasered Horus to death! A sad end as I was hopeful at that point that I could take the second down! Abaddon had attempted to show up but misshaped and even with his re-roll ended up being placed in the far corner. With Horus down and Abandon miles away the game ended quickly. I only managed to secure the 1Victory point out of the game.

Game 3: In this game I played Matt and his Iron Hands with Knights at 3k. Matt was running a tank heavy list but with only a couple of scoring units. This was a fantastic game and very close! 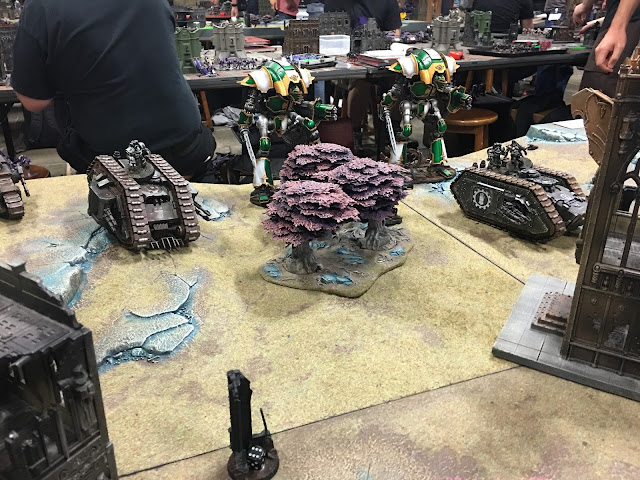 As in the titan game Horus and Abaddon deep striked and came after the Knights. I forced Matt to make a tough choice for his Ion Shield. 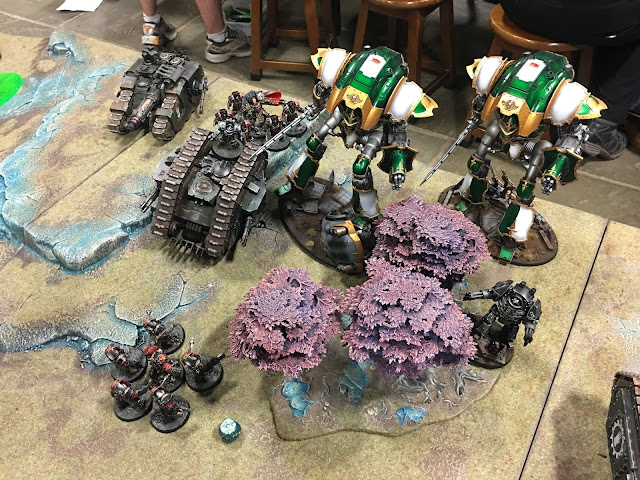 Between the 2 deep striking units and the double Kheres Contemptor I blow the first knight up! This annoyed the second and he came looking for revenge along with some terminator friends! 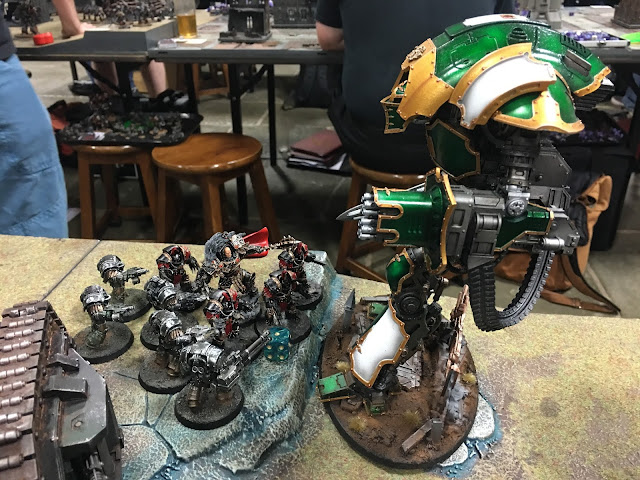 The combat was going well, Horus had the Knight down to its last hull point but the this just made the Knight even madder and in a fit of rage it stood on Horus' head and squashed him!! 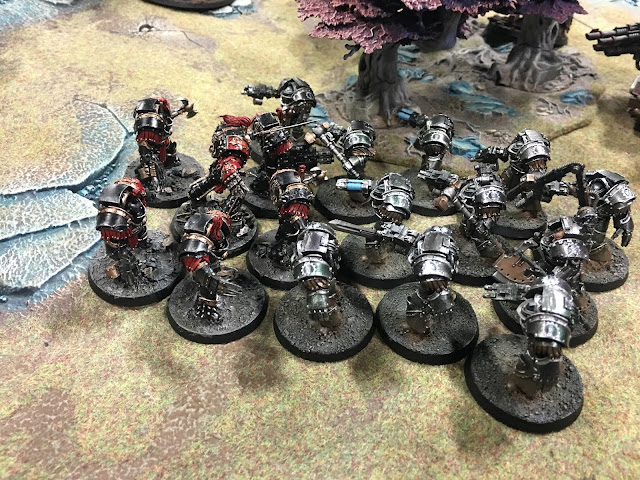 Mean while the other terminator squad got out of the Spartan and charged Abaddon. Being well out numbers and the Iron Hands being armed with power fists, they didn't last long, but they did take half the squad with them though! 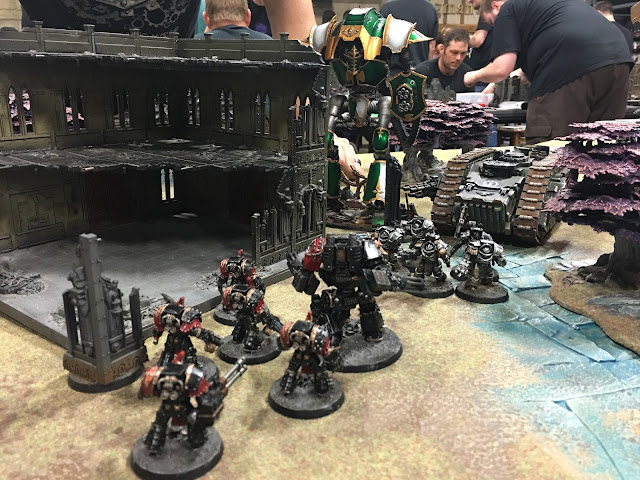 The Iron Hands then set about chasing down the last of my army. The ensuing combat saw the end of the knight and the Iron Father. As well as the last of the Sons of Horus in the above photo! At the end of turn 5 we rolled and the game ended, which I was very thankful for as I only had 2 Justaerin left on the board, one of which only had 1 wound.

The day ended with a Bugman's and a Horus Heresy quiz which was awesome! Our team didn't take the victory but it was a close run thing. All but one of teams scoring between 50 and 56 points!

Game 4: A great start to day 2, I played David and his Mechanicum at 2.5k. It was a beautiful army however it vastly out gunned my Sons of Horus but the game was a lot of fun! 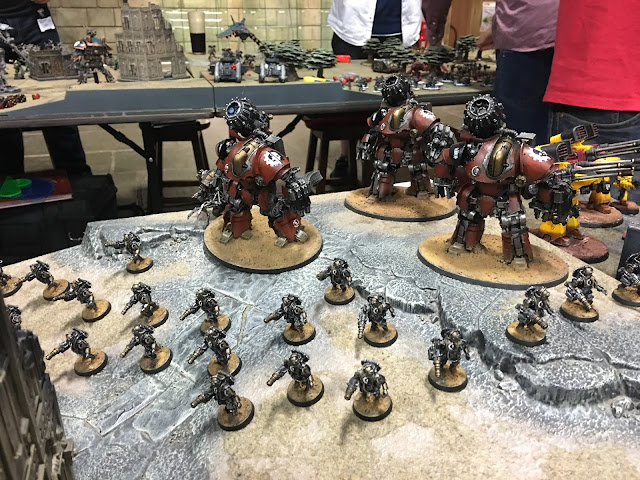 I wasn't able to deep strike with Horus and Abaddon, as they would have been shot with interceptor fire due to augery scanners in several of the units. Wisely David set up in a corner and away from my army. 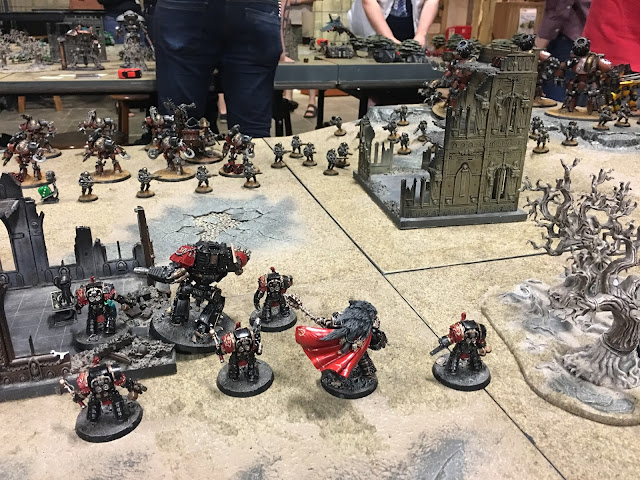 I tried to secure as many tactical objectives as I could to even the fight but the large plasma blasts were crippling! I sent Horus off to trash some of the army and he went straight after the mechanicum's leader, Scoria. 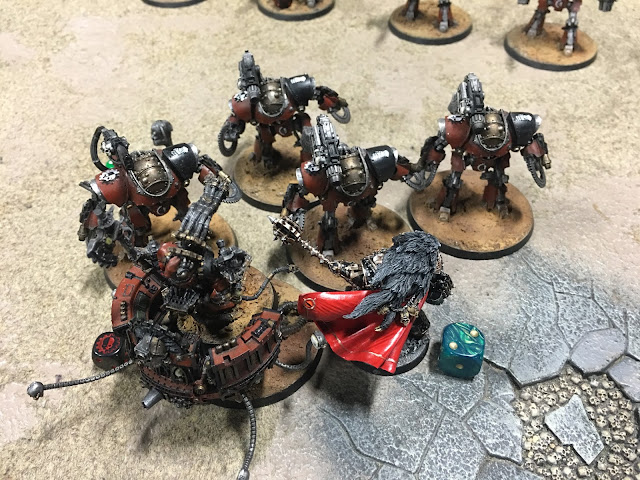 It didn't end well, as Scoria is kitted out with loads of deadly weapons and rules! Plus he had four friends with him beating on Horus and forcing too many saves. In the end the Warmaster was killed and my army wiped out!

Game 5: Kaelo challenged me in the last game and it was on, the Battle of the Bunnies! Kaelo had his Raven Guard and we played at 2.5k. We had an awesome game!! 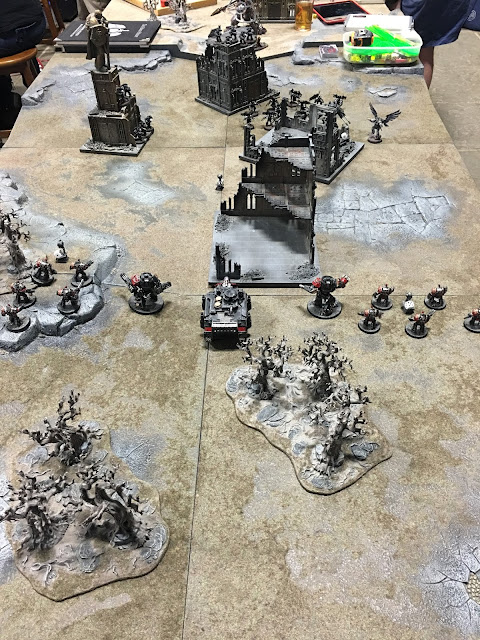 Here was how we set up, we both had quite a lot of reserves to come in to join the fight. Having heard how deadly the Dark Fury's had been throughout the weekend I wanted to make sure they died, a lot! 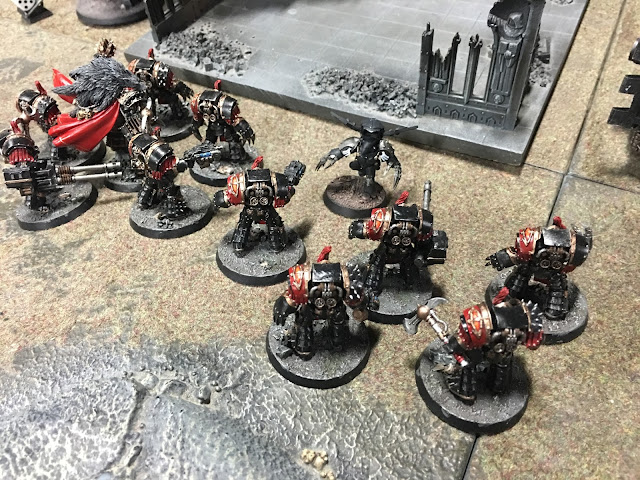 That part of my plan went well! However Corax was mercilessly hunting down my squads single handedly. Horus was getting upset by his Bothers actions and he went after him! Corax really didn't want to fight Horus and kept running away. I nearly had him twice, I failed the first charge by 1 inch and the second charge chance by 1 inch, which re-rolled to 2 inches! So close yet so far. It was a close game throughout but in the end the Raven Guard won!

Painting:
I entered something into all the painting competitions but I was unsuccessful in all categories. There were a lot of good entries and the winners were all beautifully painted. Well done to all who entered and won!

Overall:
I had 5 fantastic games and came away with some great stories to tell for the years to come! Thank you to all of my opponents, it sucked that I only had 1 favourite game vote as each one of you were deserving of the vote. In the end I only won 1 game and scored 35 Victory points but came in 14th overall, which I was really pleased with.

Thoughts on my army list:
The Justaerin are insanely survivable, but I had so few models left at the end of every game that it was touch and go as to whether I would see the game through. The vindicator did very little, as did the Venator (although I only got to use it once). The 2 Contemptors are cool but are easy targets for opponents big guns. They did contribute but the Justaerin did nearly all the hard work. Horus made the list a lot more affective, as he is seriously badass! He is more than capable of dealing with whatever comes his way. I think the main issue was that my Justaerin were both my scoring units and my damage dealing units, which often left me with a hard choice between dealing with what was killing me or holding onto the objective. I had good fun using it and hopefully my opponents had fun playing against it! I have a ticket to the Shadow Wars Campaign in the October and it is likely I will be using the Sons of Horus again but I may rethink the list a bit or perhaps try and get some Green SoH sorted to bolster the force.

If you are interested in seeing more of pictures of everyones else army the Warhammer World team did a fantastic job of documenting the event. Check out there Facebook page here.

Lastly thank you to Warhammer World team for a great event and my opponents for awesome games!