Good evening all.
Glad to be back in the saddle from my brief hiatus and looking to get some hobby on.
Tonight I bring you a chunk of completed hobby (for a change I can all hear you shout). The last few days have seen me square away the first portion of containers that I started a while back.
As you may remember I used salt weathering for the first time on these as a means of testing out the process on something less than vital to my crusade era forces.
When I last posted this is where they were at... 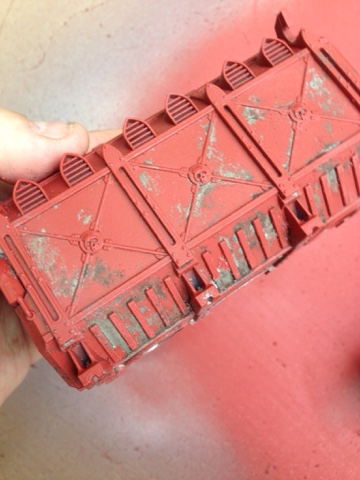 Obviously this was only part done but as I was batch painting these it took a while to get the 9 upto this stage.
Even though I had brushed (vigorously) to remove the salt I found that, as I'd used cellulose paint and not an airbrush, some of the salt was resisting my attempts at removal...
Que the H2O.. 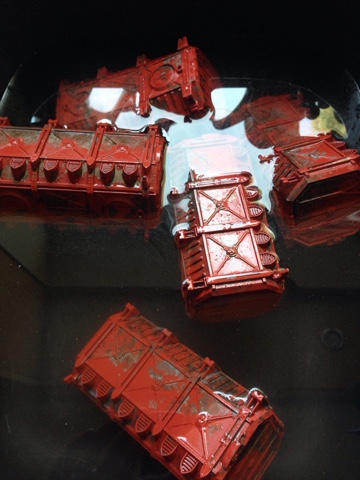 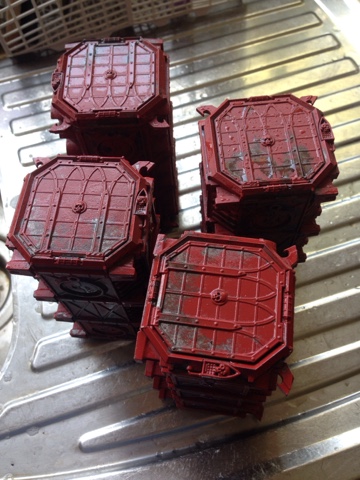 After a brief dunk all the excess salt dissolved and was easily removed with a final cursory scrub.
Next stage was detailing and transfers. Very simply I painted the stud skulls with Valejo's Old Gold, dry brushed the keyboards and vents with Leadbelcher and painted the servo skulls with the same method as on my Night Lords;
Steel legion drab wet brush
Argax earth shade wash
Karak stone wet brush
Ushabti bone dry brush
Skull white highlight
I then applied the transfers. I divided the crates into blocks of 6 and 3 so that the identification marks would cycle in lots of 6 - handy in future to use these as objectives in games. I went for generic Mechanicum for the simple reason that these will be used in lieu of buildings on my city fight table and as free standing scenery in my Zone Mortalis games, and as I have several armies it made sense to have the containers as equipment shipped from Mars to assist in the war effort (regardless of which side you're on). 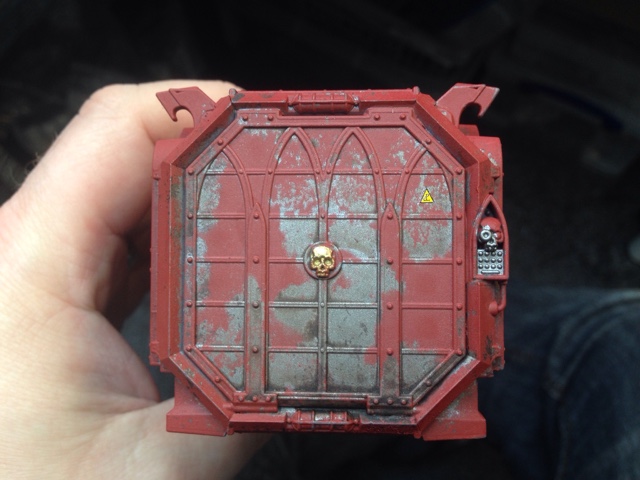 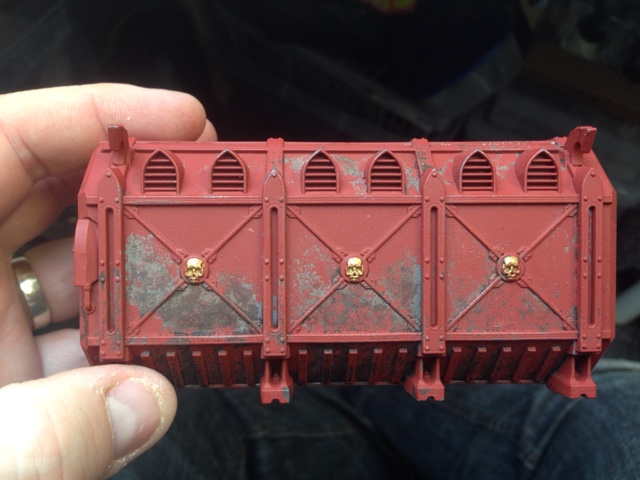 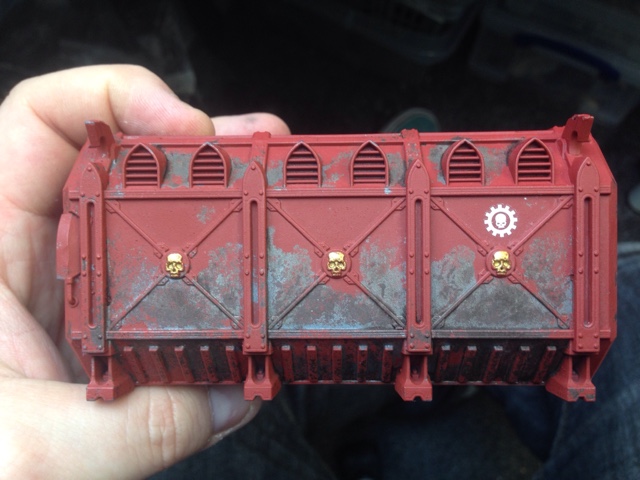 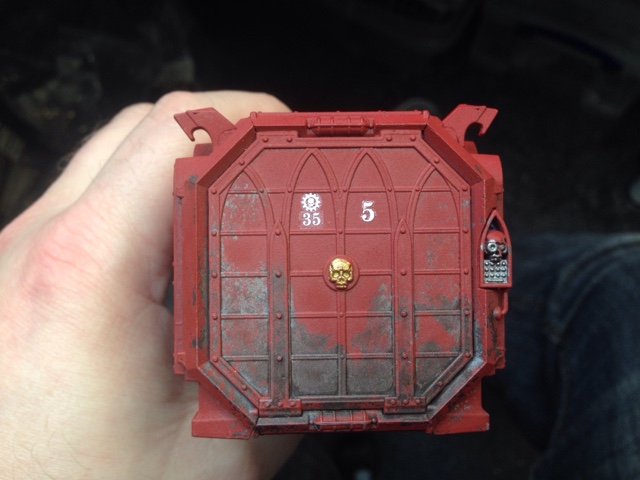 Once the transfers were on it was time to try another new technique - the pin wash. I know a lot of great painters use this process (including our very own Drake Seta) but I'd never been brave enough to try it on anything other than test pieces. So I went in two feet first and eyes closed.
The first stage was sealing the paint - for this I used Purity Seal. I've read a lot of criticism about purity seal and to be honest I've never had an issue - however on this occasion I did. Half the containers started to frost up. I had read re-spraying immediately can reduce the effects - which I did and also to spray another varnish on also removed it - which I also did (with the Army Painter anti-shine matte varnish). Even after those salvage attempts some of the containers looked a little pink in places. I had to take it on the chin and move on, hoping the next stage might rectify the problem.
Next I mixed up some thinners with Burnt Umber oil paint (I stumped up for the good stuff). I mixed until it was the consistency of emulsion paint.
Then I applied a coat, covering all the containers parts in one pass. 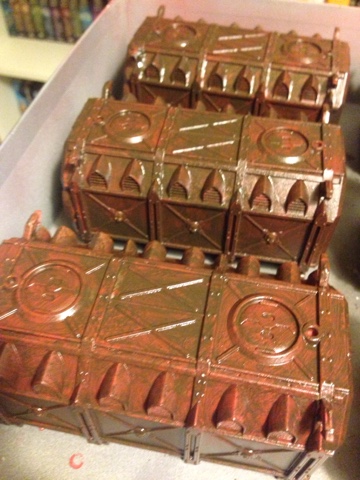 By the time I'd coated all 9 the first one was ready to be rubbed within an inch of its life - I chose kitchen roll for this job, rubbing loosely all over then rubbing in one pass with my thumb in the triangular sections made by the ribbing on the container sides. I also paid extra attention to where the transfers were. 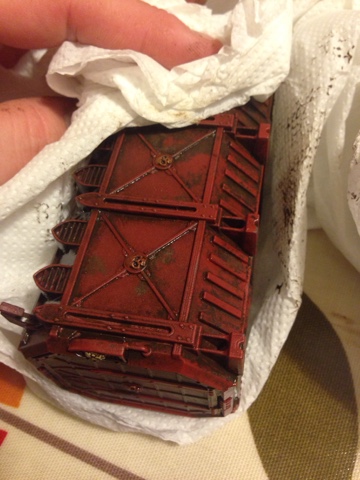 I found that a little thinners on a brush and a quick swipe across the transfers helped them to pop a little more.
And so the 9 containers were done... 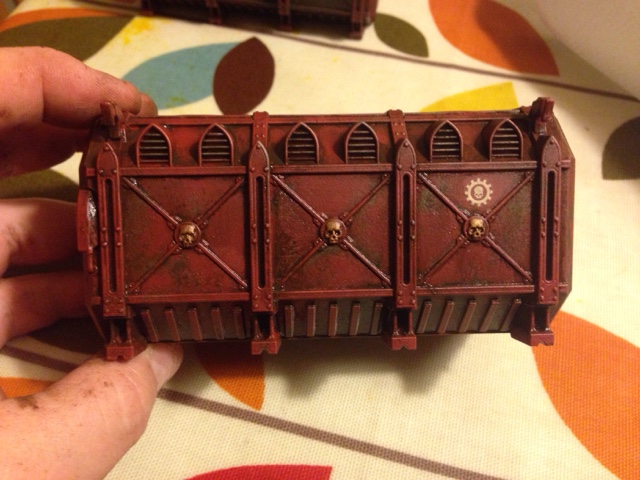 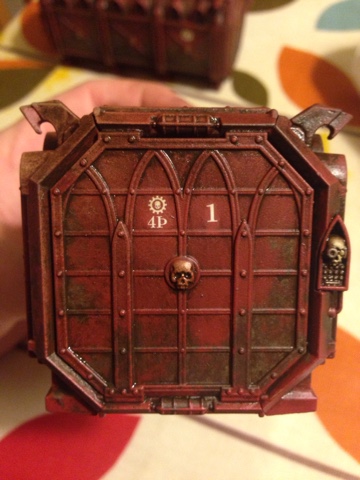 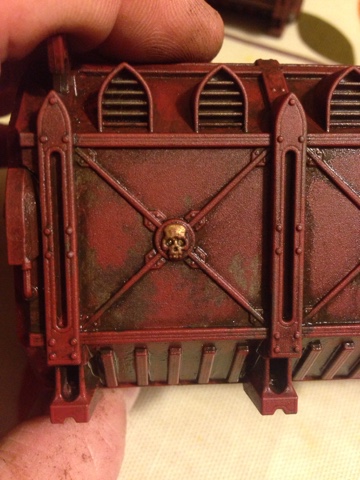 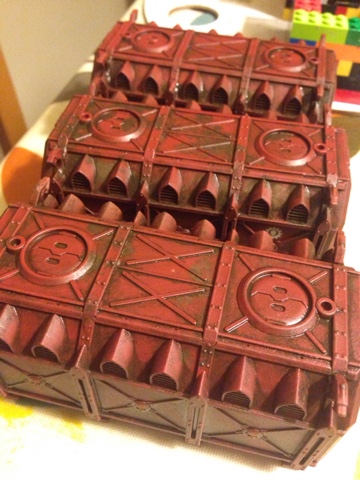 And in situ on a gaming board section... 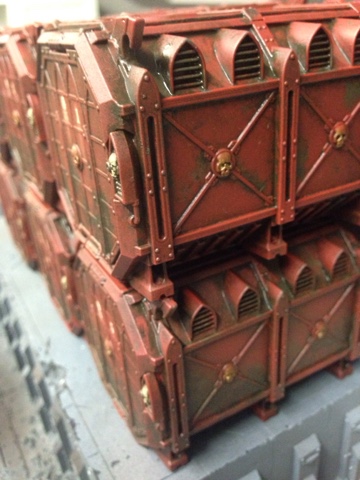 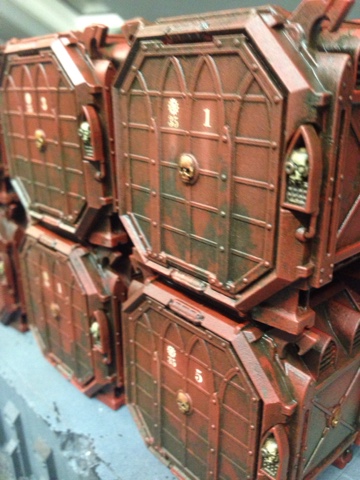 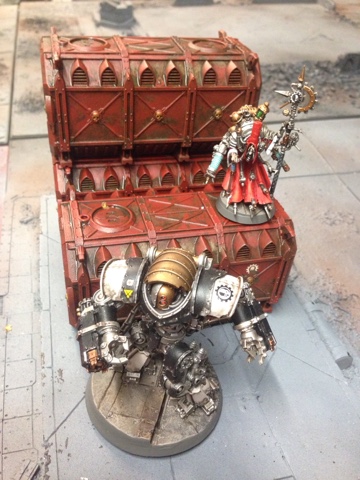 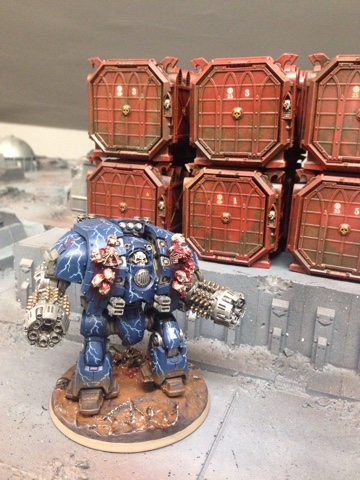 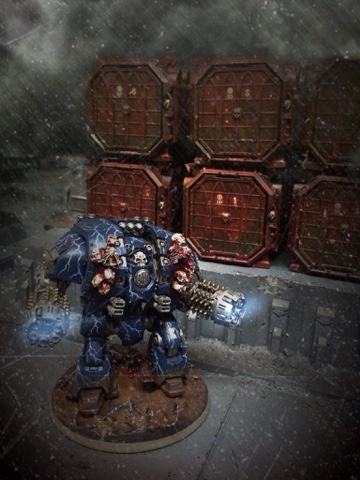 Now it's just a case of repeating the process for at least another 9.
Hope you enjoyed seeing something actually finished for a change - something I hope to emulate in my next post concerning the boys in midnight clad.
And remember - never trust a skinny chef.
Peace out.
KF
Posted by King Fluff at 22:28