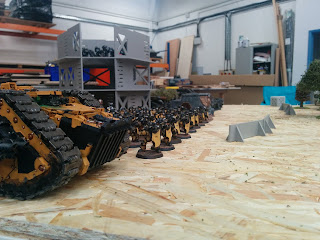 Thank you Kaelo for the introduction last week but considering that all everyone knows is my favourite unit (the Legion Breacher Siege Squad), I think a full introduction is overdue so let’s do that!

I was always interested at a young age but I didn’t really know anyone who played so I ended up playing TCGs back then but now I have a lot of friends who all wargame, the door finally opened up for me. In August 2012, I had a demo game at my local Games Workshop and I was hooked, next thing I knew, I had a Dark Vengeance starter set on order, and a whole bunch of Grey Knight stuff as I liked the aesthetics (Dreadknights!).

Fast forward about year, I started looking at collecting a new army and for inspiration I started reading the Horus Heresy series and the odd 40k book here and there and Space Marines just became an obvious choice for me, particularly the Imperial Fist chapter so I started collecting them.

I love their siege warfare specialisation, it felt like a natural fit for my playstyle (defensive rather than offensive play, anti-vehicle/building armaments, siege tanks…) and as I learnt more and more about their history, it highlighted also how multi-dimensional they really are – just look at their successor chapters (i.e. the Black Templars and Crimson Fists). When their legion rules came out for Horus Heresy, I was so glad that this was accurately represented and funnily enough I bought an awful lot of marines from Forge World and started building my legion. 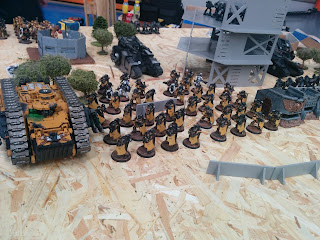 I originally started my legion with the Siege of Terra in mind but with all the stuff that Polux was involved in – the Battle of Phall, his involvement in Imperium Secundus (Pharos) – it was hard to ignore the wider war so I’ve been expanding to include other elements and have been considering creating a shattered legion army to introduce other legions into my collection (Ultramarines to team up with Polux for instance).

I also have other armies sitting on the side-lines currently that I can make use of here in the Heresy – I’ve got a Knight Household that I am currently in the process of deciding which household they are (most likely a custom one as there isn’t really enough 30k lore on the knights in my opinion and it will be easier to introduce them into my fluff to support any of my other armies). I also have a cultist army that is a work in progress – using the Age of Sigmar Khorne Bloodbound models from the starter set I have built up quite a horde of berserkers that could be used as a traitor army or even a chaos corrupted human population on an uncompliant world for a great crusade scenario.

Looking forward, I’m really looking forward to sharing my love of the Imperial Fists with you all by showing you elements of my army and possibly even starting up tactics discussions. I’m also planning on showing you all other parts of my hobby work as I am looking at working on the scenery for my Realm of Battle board (buildings, fortifications, cargo containers, even random scatter terrain as I feel the little details really help make a board look great!).