Fortifications: Why would you use them? 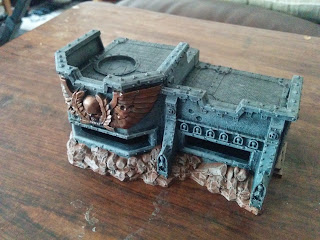 Today I am going to be talking about something that I rarely see people discussing in the context of Horus Heresy era gaming – fortifications! Yes I know… the Imperial Fist player talking about the merits of fortifications is somewhat predictable but believe it or not, I have not really encountered many Imperial Fist players actually using fortifications at the Horus Heresy Throne of Skulls tournaments – our legion rules give us bonuses for using them so why don’t we?

At a guess, people may perceive them as a bit of a points-sink – to sum up what I have heard on the subject of fortifications:
All fair points… well… maybe not the last one; a ruined fortification is not good at all… but the point really is this: If you want to take fortification(s) you do have to plan around them but they do provide value to your army in ways standard terrain may not be able to. To highlight this, I am going to start talking about the humble Imperial Bunker… 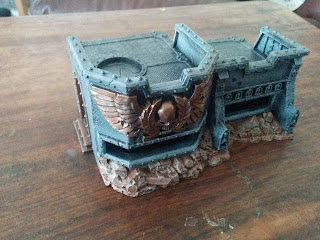 For a little bit more than a Rhino APC, you can take an Imperial Bunker as a fortification in most FoCs in Horus Heresy. With the same armour value as a Land Raider and two large fire points that allow up to 8 models to fire out of the building and ramparts on top to provide a decent cover save to anybody up there, you suddenly have a pretty resilient little fire base for a heavy support squad for instance.

You can buy an ammo dump for the building which improved the accuracy of the squad in the building, you can pay for a comms relay to help make your reserve rolls that much more reliable, you can even give the building a void shield if you want to be extra sure that a destroyer weapon won't wreck your bunker in one shot. Escape hatches, barricades, tank traps… You can build a small defence network just from the bunker and its standard upgrades if you really wanted!

Worried that it is taking valuable points away from your army? Keep it cheap! The basic bunker is great value for the amount of points you pay for it, bubble wrapping a heavy support squad as it forces your opponent to make a choice – ignore the bunker and receive the punishment being dished out by the heavy support squad or throw a good portion of their anti-tank capability at it to try to crack it.

Worried that it is static? This needn’t be a concern; the bunker is really cheap and you can easily deploy this to cover multiple objectives. Besides – you can design the rest of your list to be mobile so you can easily hold the objectives on your side of the table while still have the capability to threaten your opponent’s objectives.

I hope I have at the very least highlighted the merits of fortifications in Horus Heresy – I feel they are somewhat overlooked. There are armies that wouldn’t really make use of them – Raven Guard and Night Lords for instance – but I hope I can at least convince some of you that it might be worth trying them out or possibly even design a scenario around them!