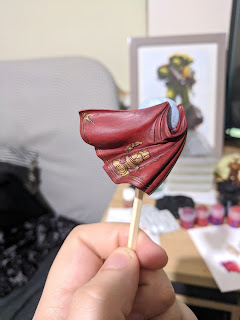 It's good to be back in the UK! I'm making more progress on the cloak now - the main thing is that I have changed my recipe for the cloak.

In theory the way I originally planned it could have worked but I was having some real difficulty trying to get the transitions right so I've gone back and pretty much started it again. I'm going closer to the recipe Duncan used for the How to paint Skitarii Rangers video he did a while back for Warhammer TV. 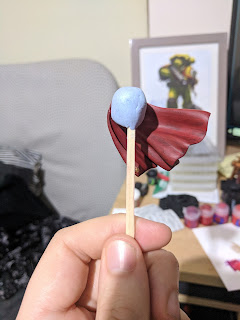 As you probably can tell, the pictures above I've done steps 1 and 2 and I'm going to be making a start later on laying up the Mephiston again. Hopefully I will have more to show tomorrow for the progress report tomorrow as I also hope to start layering up the armour too. 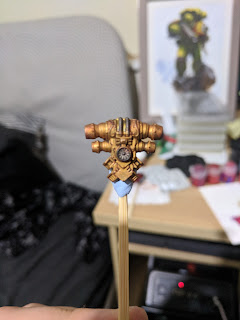 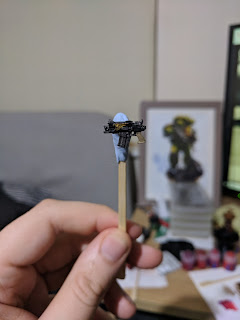 As you may recall from the previous post, I mentioned before about my fingers getting in the way when working on the cloak. Now this isn't such a problem as I got myself some blu-tac and some mini bamboo skewers and voila, I can now keep my grubby fingers off the paintwork while I'm painting away!

Next time I post, Rogal should be looking a lot more complete - we are getting to the point now that the pre-highlighting assembly stage is imminent!