There is something I am getting the impression of really quickly. It honestly to me looks like the Primarchs in 40K are becoming akin to Super Heroes, and you know what; I’m actually cool with it. So here is my post of wild predictions and opinions of what might happen in the current 40k story arch. It will contain some spoilers too. Sooo be aware.

“I am what I always have been,’ said Corax. “I am vengeance incarnate. I am justice delivered. This place beyond the veil, has revealed what we all are. Underneath the veneer our father crafted for us, we are of the warp.’

Gav Thorpe - Shadow of the past.

So. In this story, a black shadow “daemon” is tearing a group of Word Bearers to pieces whilst they are continuing with their great works. Turns out it is actually Corax, and he is effectively a super being with the ability to take the form of a shadow which can be a puddle of pure darkness one second, and dissolve into an unkindness of red eyed Ravens the next. Now this may be some tech, but if you look at the passage above that he says when he confronts a surprised Daemon Lorgar, I think it may be his true abilities coming to the fore. Yes I know he can make people not see or register him, but it seems like he’s become more enhanced. Soooo now he is the equivalent of a dark shadow which moves like Vincent Valentine, has the capabilities of a shadow like in Ico, disperses into Ravens like Dracula (just not the bat part). You know what. . . . that is epic.

It has always been a point of concern with me, where Daemon Primarchs, should they come back, would the Loyalist lot be able to take them on should they return? Or would they be like Mumen Rider taking on the Sea King in One Punch Man.

This shows that it may be a possibility. 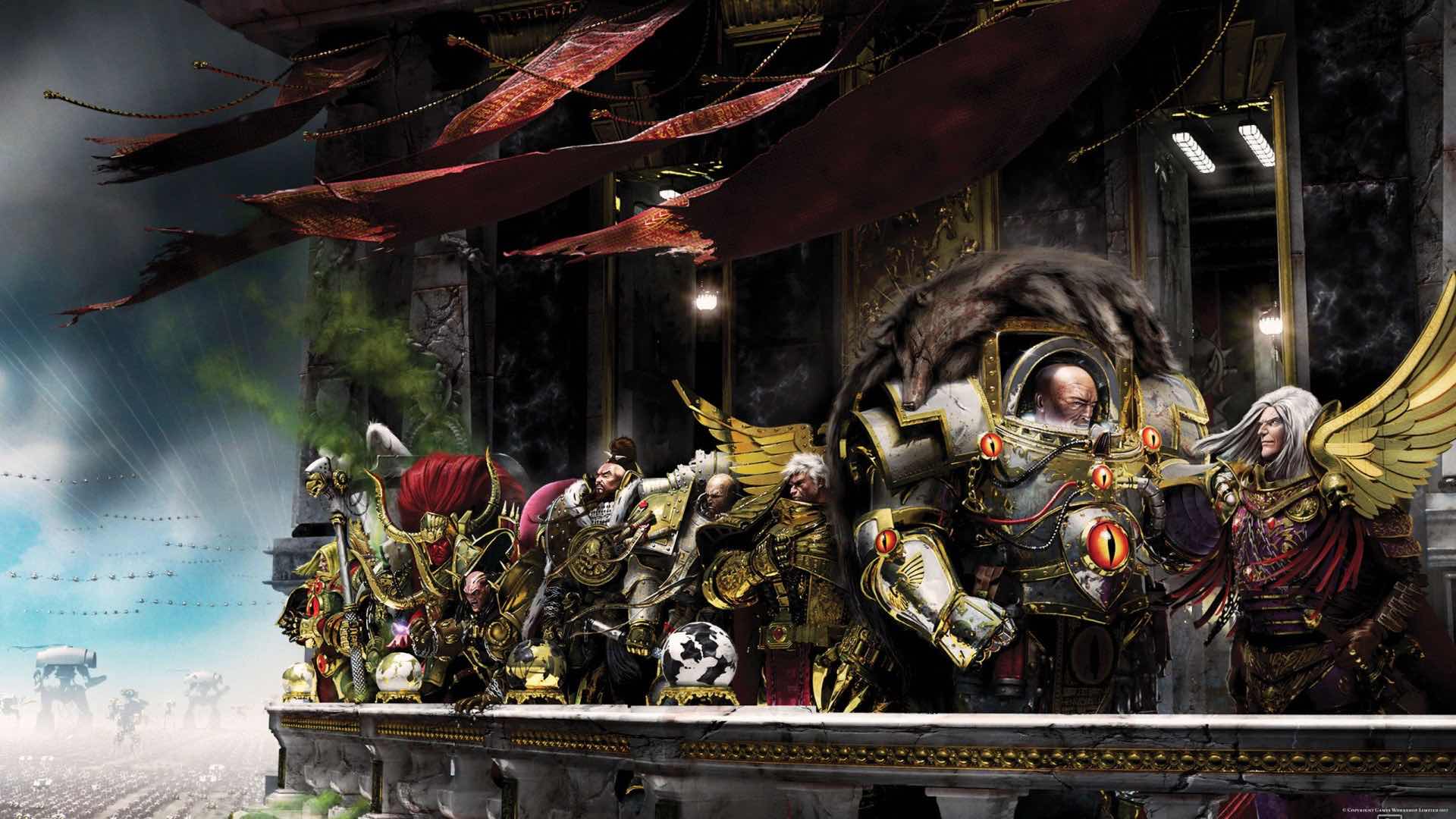 So let’s look at the characters. What could they return like and with what buffed capabilities?

Lion El Johnson: This is a difficult one to start with (so hopefully I don’t lose you here lol). He is one of the main 4 Loyalist Primarchs in my opinion. So he will need to be a tough one. But he has always been just a Knightly King. So I am not 100% sure what he may become. But, what if he actually becomes the Dark Angel. That would be awesome. He is resting in the centre of the Rock. Caliban’s core was a very very Chaos infused place, this may be buffing/incubating him into his new form?

Jaghati Khan: This may be a bit easier, but still a big leap. In one novel, the Crimson King said something along the lines of “you have the gift inside you too,” which to me could mean he is heading towards becoming a Master Psyker. As far as I am aware, he has been in the Maelstrom for a fair ol’ while (it is one of the biggest storms, he is known as the lord of the storm too), this could fuel his apotheosis into a Master Psyker (as the Warp buffed Corax). He would have abilities akin to Storm in X-Men, and you can already imagine the anguish of fighting Magnus the Red with their ultra Psychic might crashing into one another. This would make him a rich and valuable Primarch character too, because let’s face it he is not a main Primarch as of yet.

Leman Russ: Well. People (including me) are fearful that he will come back as Wolf boy, which would be 100% sugar honey ice tea. Bran Redmaw has mastered the Wulfen gene and can transform back and forth as he wishes. Ahem. . . IF BRAN CAN DO IT, SURELY RUSS CAN MASTER HIS GENES TOO!!! So, Russ could be in my opinion the Bruce Banner-esque character in this imagining. You can already picture a boxset on sale with a Wulfen form and Primarch form. It would keep everyone in the Space Wolf camp happy too as it would give them that choice.

Rogal Dorn: The Stone man. It’s a cliche, but it could happen. His skeleton in current fiction is fully encased in amber, with his hands removed. This could continue to be true, or it could be retconned. Another tale I heard was that his hands were the only pieces of him recovered after a battle. So he COULD come back either as a Primarch with a bionic (or Hellboy esque stone hand), or maybe his spirit imbues his Skeletal and amber form, turning him into a Amber-man (amber was also used as a healing agent in folk medicine), but this is very doubtful.

Also, it should be noted that Trazyn (the Necron overlord) has a Giant in Baroque Power Armour. Could this be Dorn in stasis (he is definitely in the short list).

Sanguinius: The Angelic Vampire character. As one of the 4 main Primarchs; he is certainly coming back. He is Vampiric, he is in a tomb/coffin currently on Baal (what Vampires rest in), he will be back. When he does, little will have changed of his character design in my opinion (as he is already pretty Super Hero-esque).

Ferrus: This splits people’s opinions quite drastically. Now in my opinion he should come back. There are numerous ways for him to come back too, which makes it great. So his essence, exploded out of his body and as we all know on Isstvan V, souls are real and end up in the Warp. Let me count the ways he could return.

Roboute: Well he is back already. He’s pretty much puritan leader character (as he should be) with some other buffs from his armour. He never had any real significant time in the Warp to get additional abilities, so he could just remain pure.

Vulkan: Flameboy! Well he is very Pyro. Put this guy in the Warp for a while and let him brew, he will come out with the ability to surf flame, shoot fire bolts and have a flaming hammer. Maybe his regenerative ability may come back too?

Also there will be some awesome creations that he will forge (like Batman or Beast do). Could the Unbound Flame and Engine of Woes be the two items to bind Ferrus’ soul in a mechanical form in my idea 1 for Ferrus above?

Corvus: The Shadow Primarch. Well he sounds deliciously dark. Well done Gav. He sounds as though he would be a suitably buffed character in the 40k setting.

Well let me know what you think. If you know anything that contradicts my wild suppositioning above, please comment below :)