Hi all.
We have been fortunate to get an early release of the Chapter Approved 2018 Edition for review. So let's have a look. 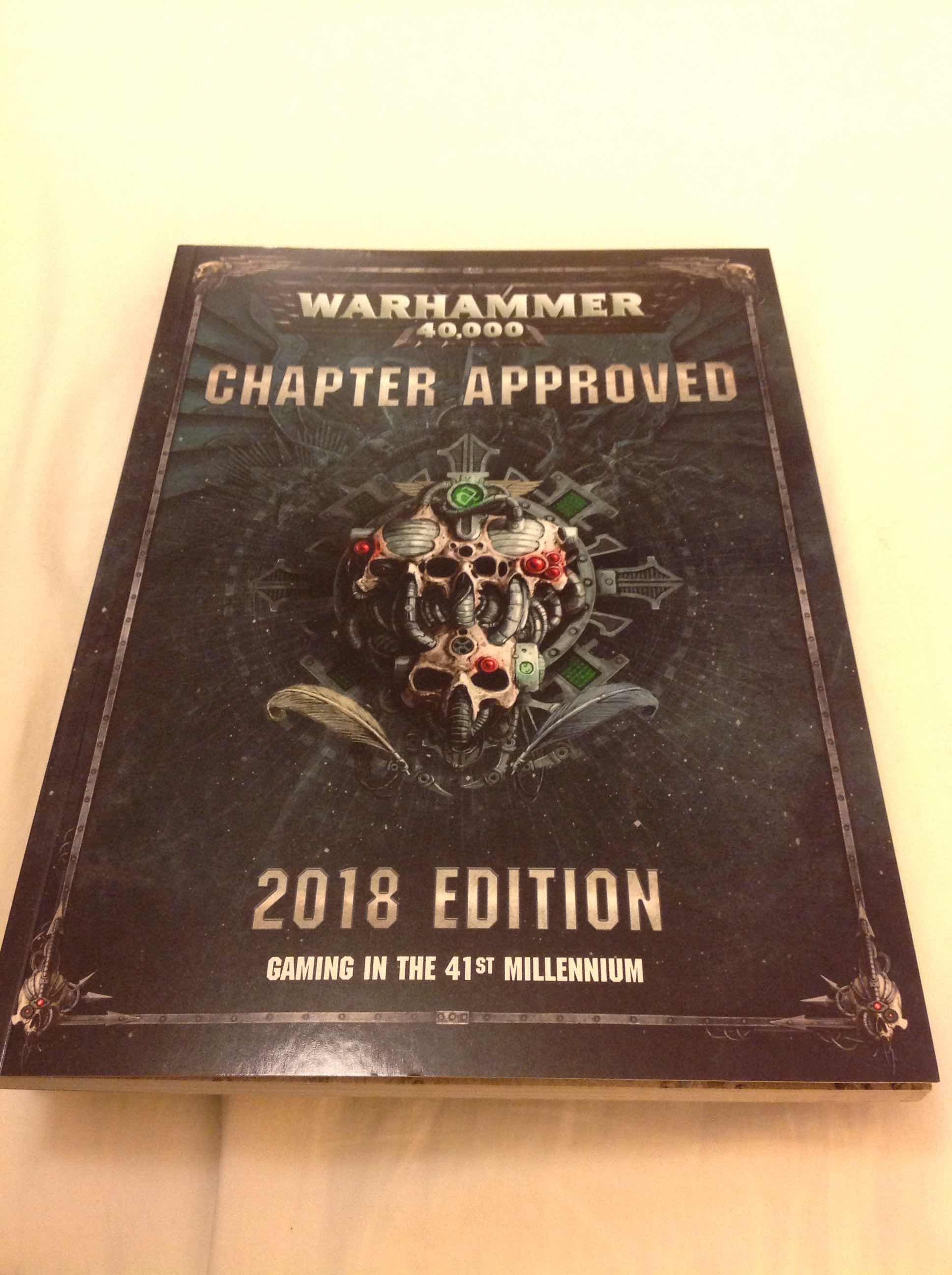 I loved Chapter Approved from back in the day, and the 2018 edition is very similar in content to its previous incarnation. So let’s get in and have a look at a few of our (Shadow and My) favourite parts.

This is a bit of a shock as I still have the old City fight books, so just having the updated 8th edition rules within this book immediately adds to its value.

The book details how you can bring city fights to the tabletop with 6 new missions and 3 new Warlord Traits to muck around with.

Of the new missions, the Gauntlet is my favourite. Many a time we have played Gauntlet-esque missions in our narrative games, where one force desperately needs to fight their way between two forces. The fast paced action where cover is a real issue is has always appealed to me. 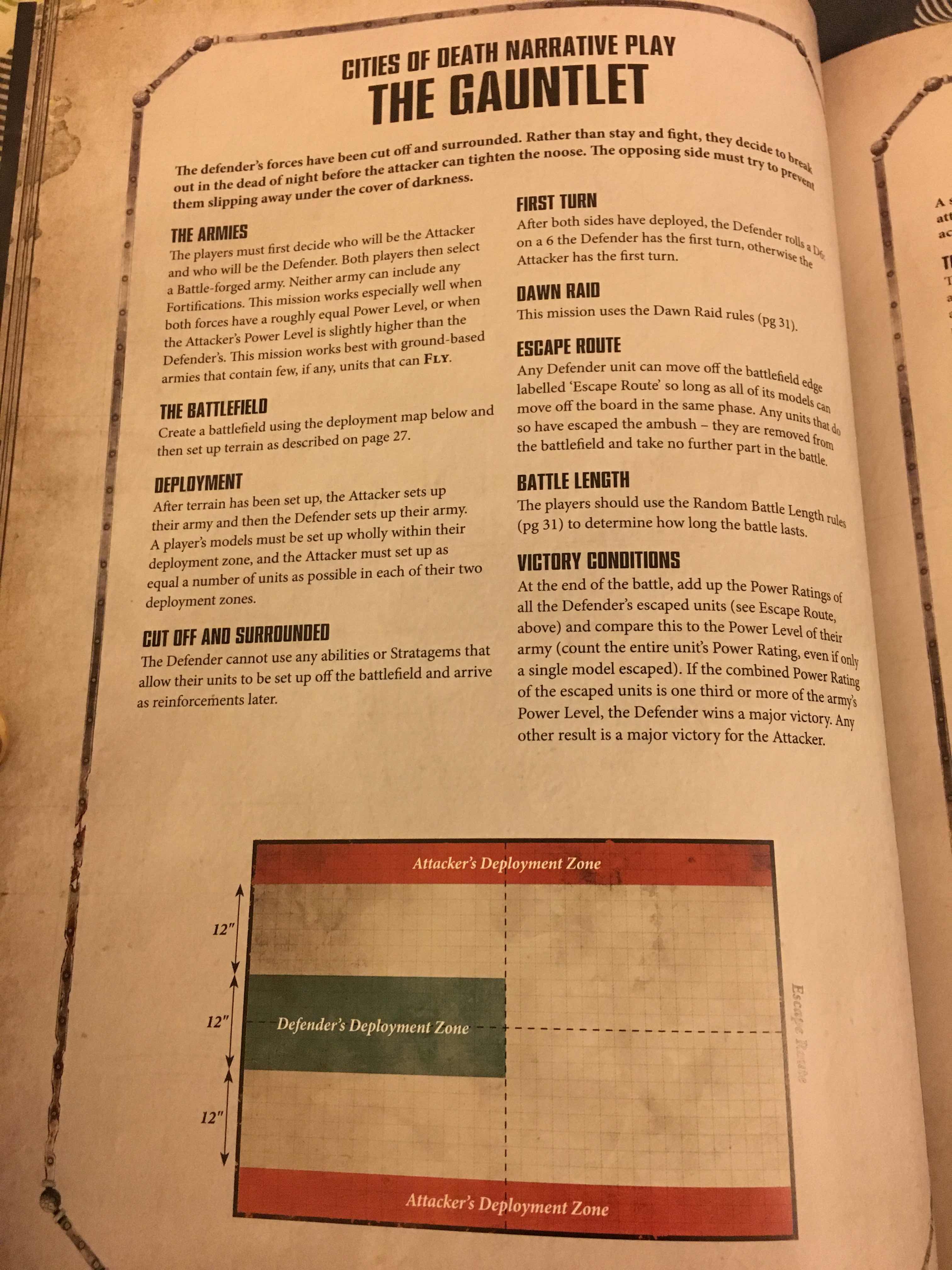 Speaking of cover, the basic jist when it comes to shooting is; if a model is partly obscured it is -1 to hit. If half of the firing squad can see an enemy unobscured, but the first half only see them as obscured, then it is case by case basis. 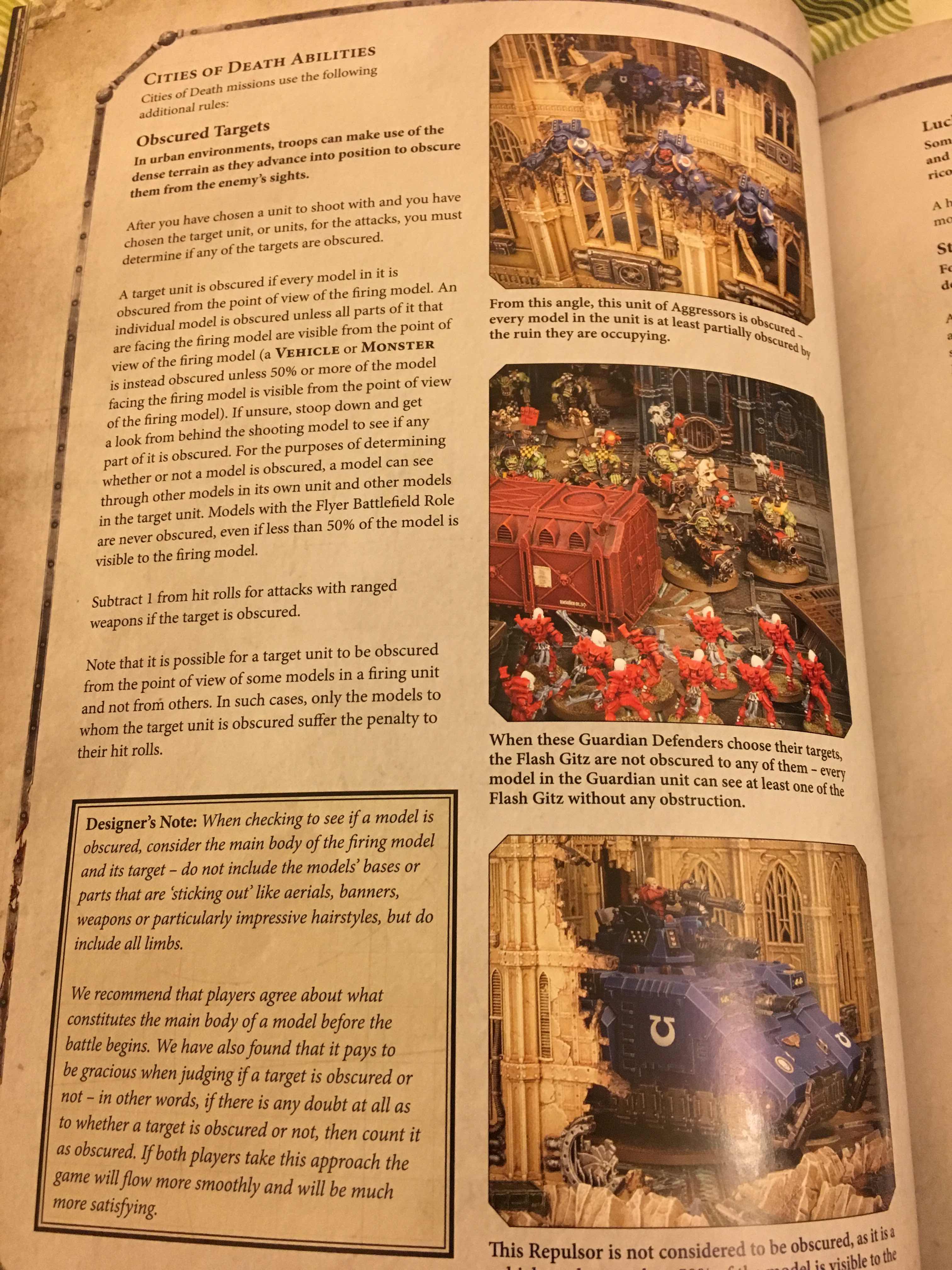 It is beneficial to gain a height advantage in 8th edition city fights as you you get additional AP modifiers too.

YES!! A great touch to see a Beta Codex in Chapter Approved. This is to be treated as a work in progress Beta, and placeholder Codex until the full book comes out hopefully in a year or so’s time. It even gives you the email address to send your feedback in to; 40kfaq@gwplc.com. 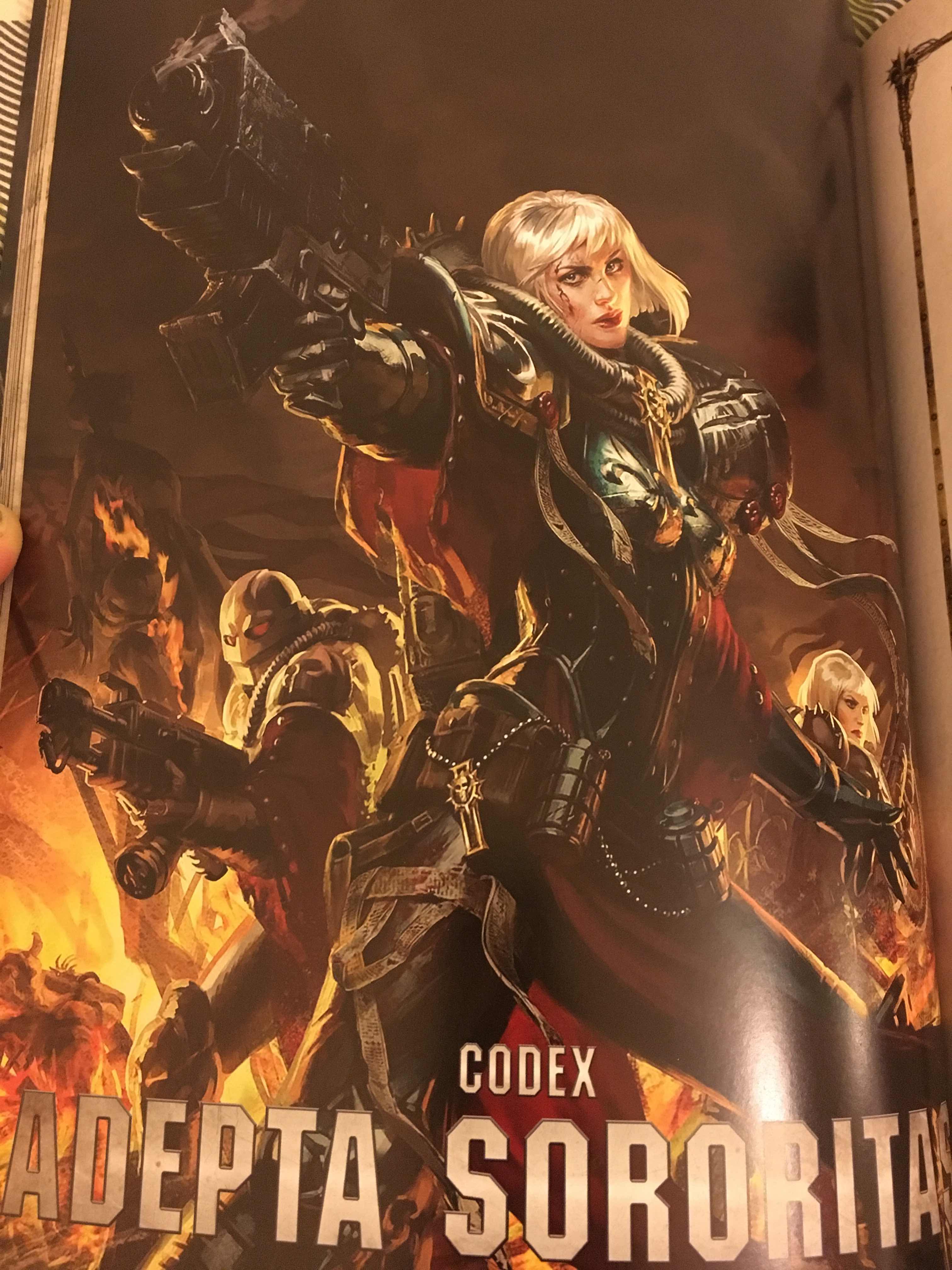 The Codex gives background on the organisation, the 6 main Orders (Bloody Rose, Argent Shroud etc.) and a few pages showcasing colour schemes of the metal range of models. 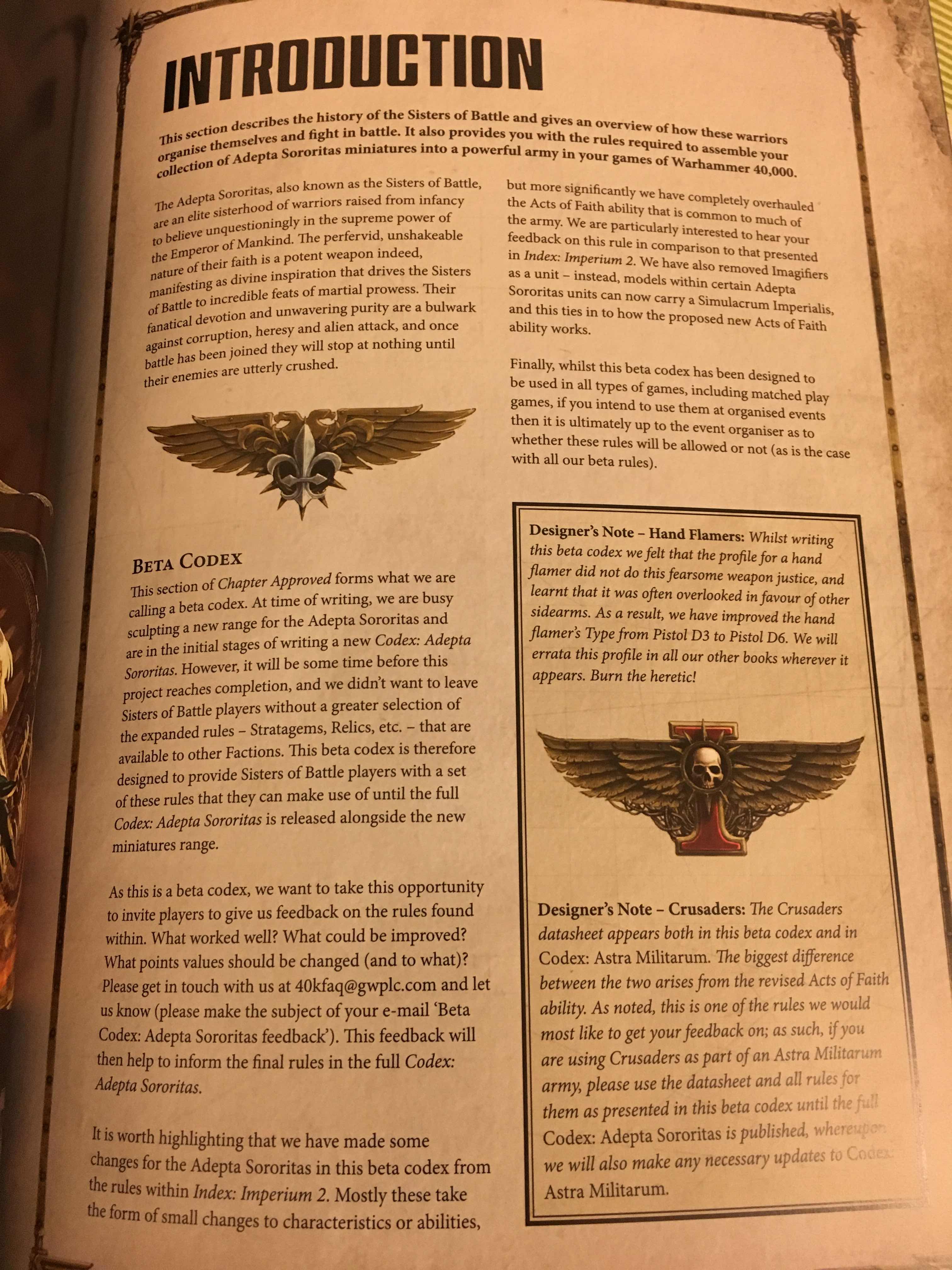 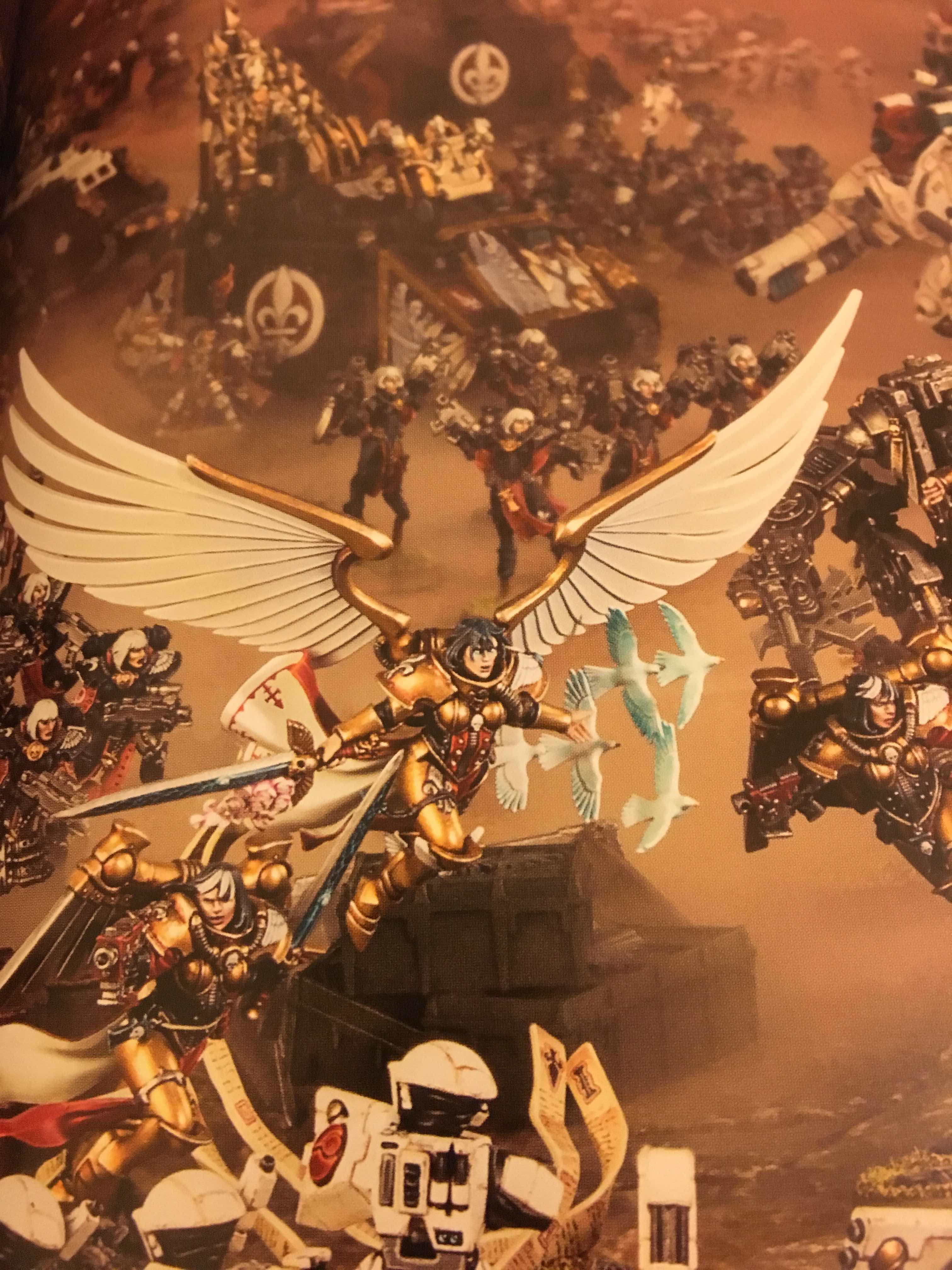 Shadow has prepared a review of the following two sections.

Commander Dante, Marneus Augustus Calgar, Col. Gaunt, Asdrubael Vect.  What do they all have in common?  They are known and (in)famous characters in the Warhammer 40,000 lore.  What do only two of them have?  Established rules.

Character Creation in CA2018 is quite simple.

1.) Pick the datasheet that you wish to build from, as long as it is not a named character and has the CHARACTER keyword.
2.) Change the sub-faction keyword to the relevant sub-faction, such as Captain Uriel Ventris of the Ultramarines having the Ultramarines keyword in place of the Chapter keyword.
3.) Select if the character is a Hero, Mighty Hero, or Legendary hero.
4.) Roll on the provided tables or choose the attributes you wish to give your character.

The structure of this easy-to-use system is defined in Chapter Approved in more detail, but the basics are simple to grasp.  Regular Hero models will receive four (4) buffs from the tables,Mighty Heroes will receive six (6), while Legendary Heroes will receive eight (8).  Players are free to pick and choose any combination they wish on these tables and bring their character to life; or let chance decide the fate of the warrior.  There are some minor restrictions, such as psychic powers being limited to pskyers, not “stacking” an ability or similar abilities, and the inability to improve relics.

With a system like this in place there is likely to be a lot of wonder why there are no points values assigned to the various updgrades or tables so that this system could be used in Narrative and Matched Play.  While that would bring balance to the abilities, it would only address individual perks and not look at the new character in a holistic manner.  Players can indeed create some over-the-top and broken combinations and the system is definitely ripe for exploitation, which is the most likely reason that this is limited to Open Play.

With that said, the system is fun, simple to use, and gives Warhammer 40k fans the chance to bring someone they have come to love to life.  A powerful Captain of your Astartes can now run around with 2+ armor, a Master-Crafter thunder hammer, and the abilities that you always dreamed he had using this new system.  Chapter Approved even adds an example page showing how they created a character based on their theme. 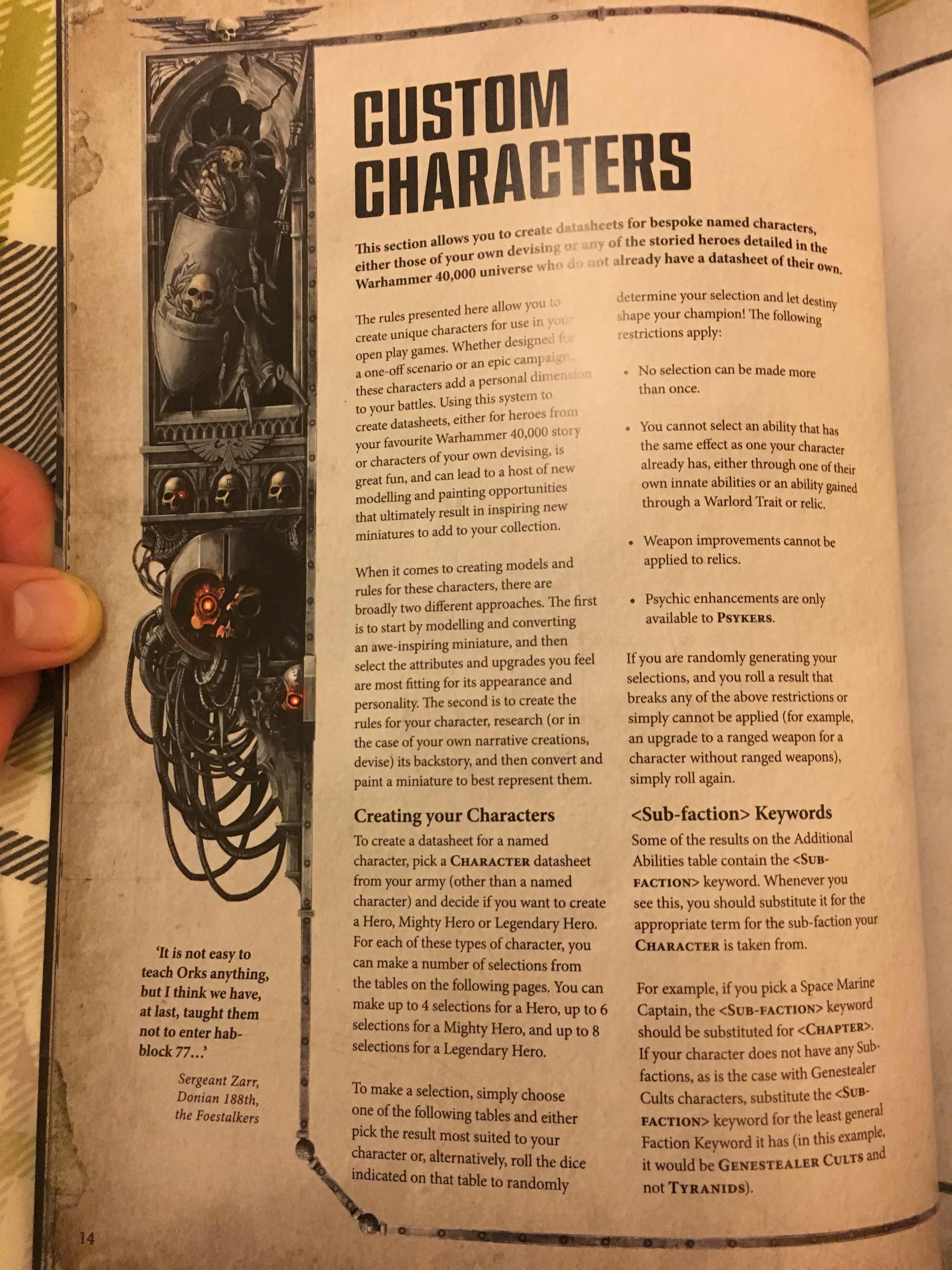 Warfare is as likely to see a veteran cut down as it is a greenhorn, but there is something to be said about veteran warriors when it comes to fighting.  They can anchor a battleline and keep it from shattering, or deliver a punishing salvo that creates the opening needed to crush an opponent.  Battle Honours represent the most fearsome units in 40k by bringing your veterans to life.

Battle Honours is an expansion to the Warhammer 40k rules that tracks the progress of your units in campaign or a one-off game (based on Power Level for one-off games).  As units complete battles, destroy opposing units, or eleminate vehicles or other high value targets they’ll gain experience and eventually rank up.  A unit’s rank determines the level of Battle Honour they can obtain and how many they can hold.

This simple to use system is fully detailed in Chapter Approved 2018 and allows for Vehicles, Monsters, and Warriors (infantry, bikers, etc.) to evolve during a campaign.  It cannot be used on Characters, Swarms, Buildings, or Drones.  Another caveat is that each Battle Honour a unit gains raises its Power Rating by one (1).  Examples for Warriors include the ability to re-roll Advance or Charge rolls, ignoring Leadership penalties, and the ability to shoot or charge after using a Fall Back.  Ultimately, this system will take the most basic of raw recruits into powerful veterans that will never yield and bring the game further to life. 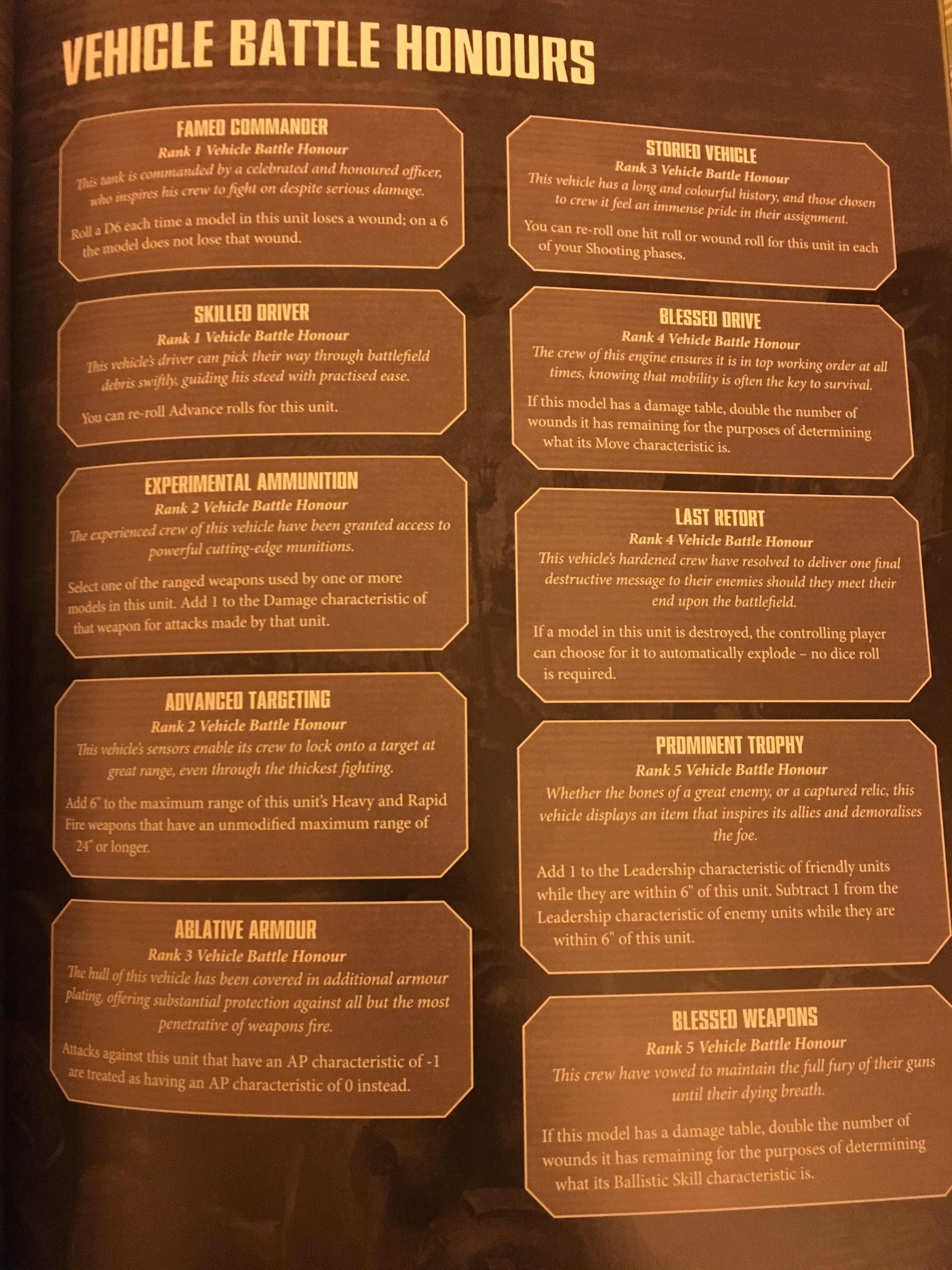 A welcome return to the Chapter Approved book. I think it is very well written and should be used as a tool to enhance the core ruleset in places with the likes of the Cities of Death rules, and additional Codex. The ability to create your own character for narrative based missions is great, as most people out there create a Commander model which gets gifted a slight backstory, which grows and grows as games are played.

The Index Renegades Knights is a great addition, and hopefully one day there will be an assortment of upgrades from GW to enable you to convert the Plastic Imperial range to Chaos.

Thoroughly enjoyed this book, and it would make a great Xmas present for any 8th edition gamer.