Today we look at Vigilus Defiant, the upcoming Campaign book from Games Workshop. 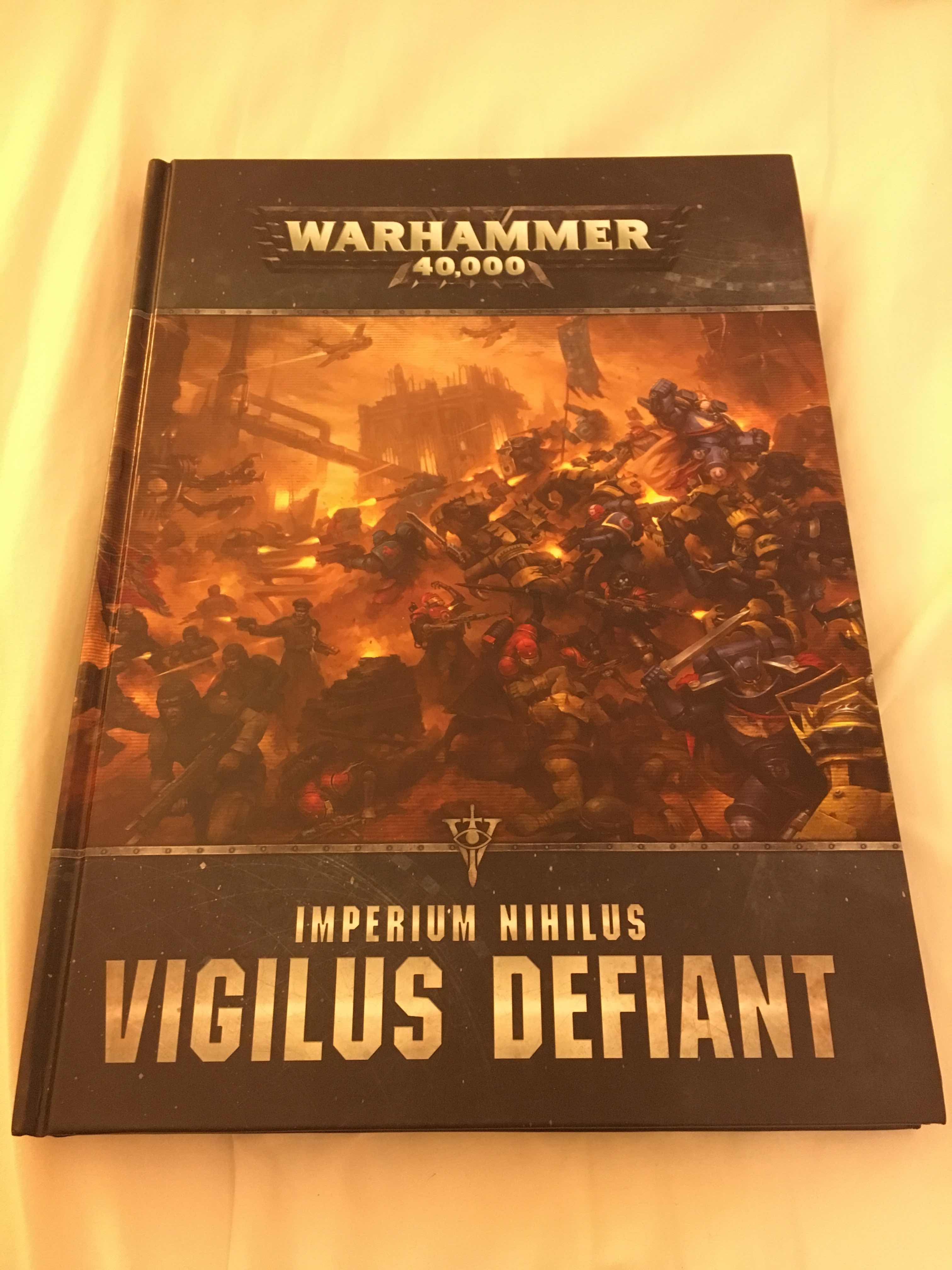 It is book 1 of a 2 book series detailing the conflict which unfolds on one linchpin planet of Segmentum Obscurus. It is a 200 page book with a LOT of information pertaining to this battleground and it’s many phases. 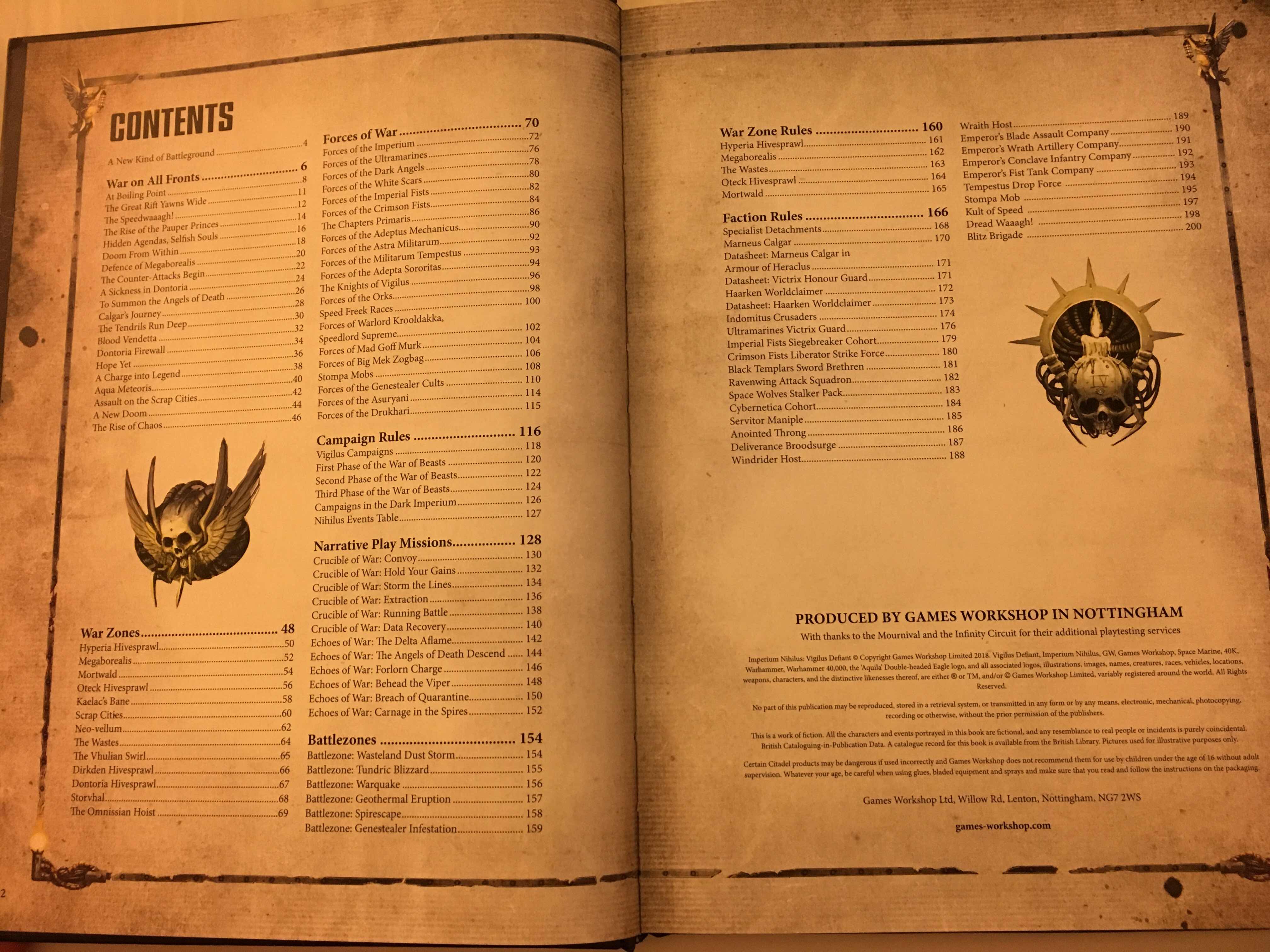 The book is aimed at numerous different factions and therefore a broader group of gamers/collectors.

Ultramarines - Lead by Marneus Calgar himself, he leads the Imperial defence.

Sisters of Battle - Order of our Martyred Lady, Bloody Rose, Ebon Chalice, Last Prioress and Argent Shroud. They seem to be lead by Temperance Blaise of the Order of Our Martyred Lady.

Astra Militarum - All of the Major Regiment Homeworlds appear present (Catachan, Valhalla etc). The biggest battlegroup is lead by Proctor Commander Vendar of the Vigilant Guard.

Adeptus Astartes - Around 25 other Chapters are present with 1-6 Companies. All the big players and a few new forces I haven’t seen before.

Imperial Knights - House Terryn played a huge part in the conflict, but numerous other Questor Imperialis, Scions of the Mechanicum and Freeblades were also present. 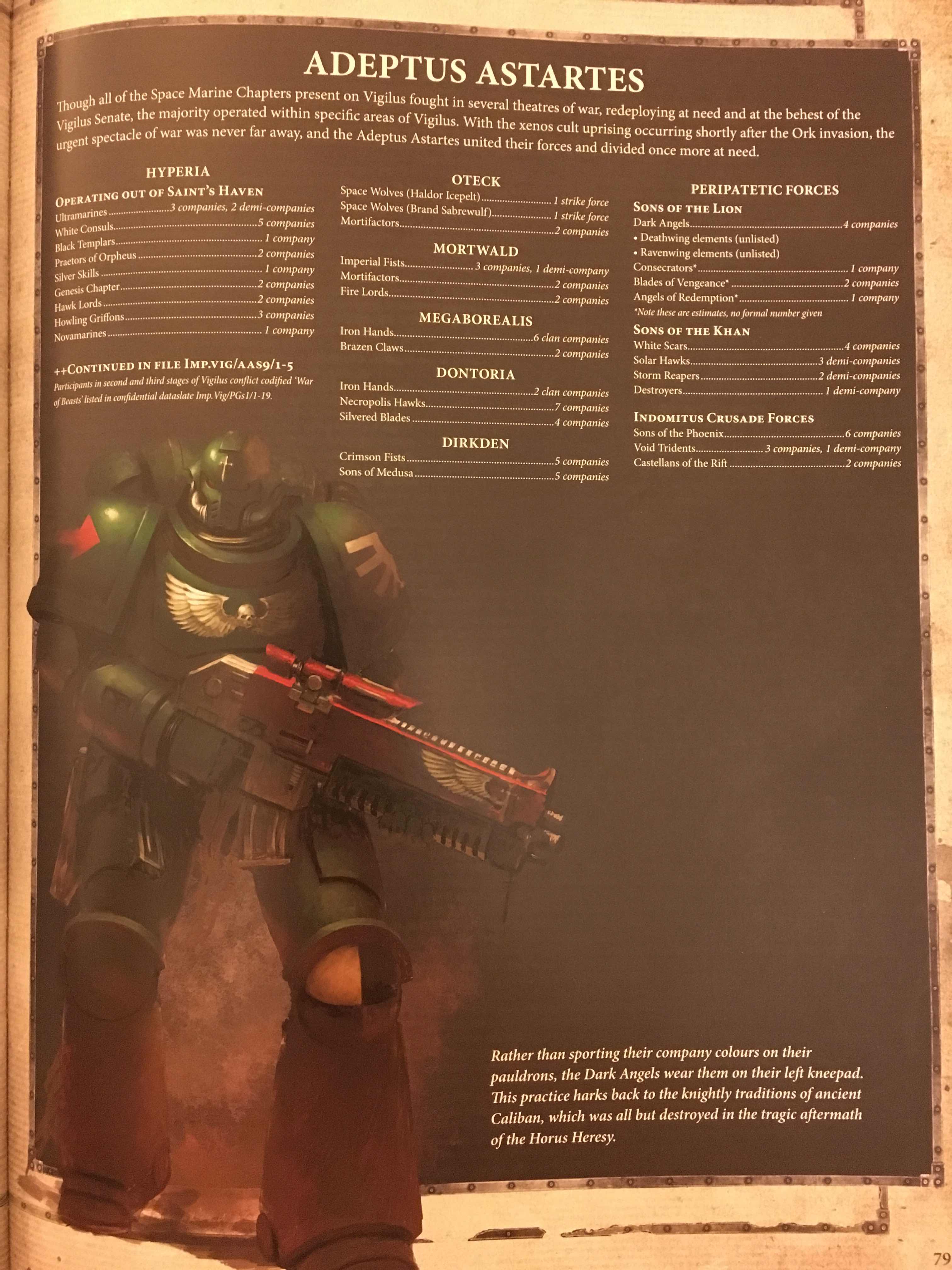 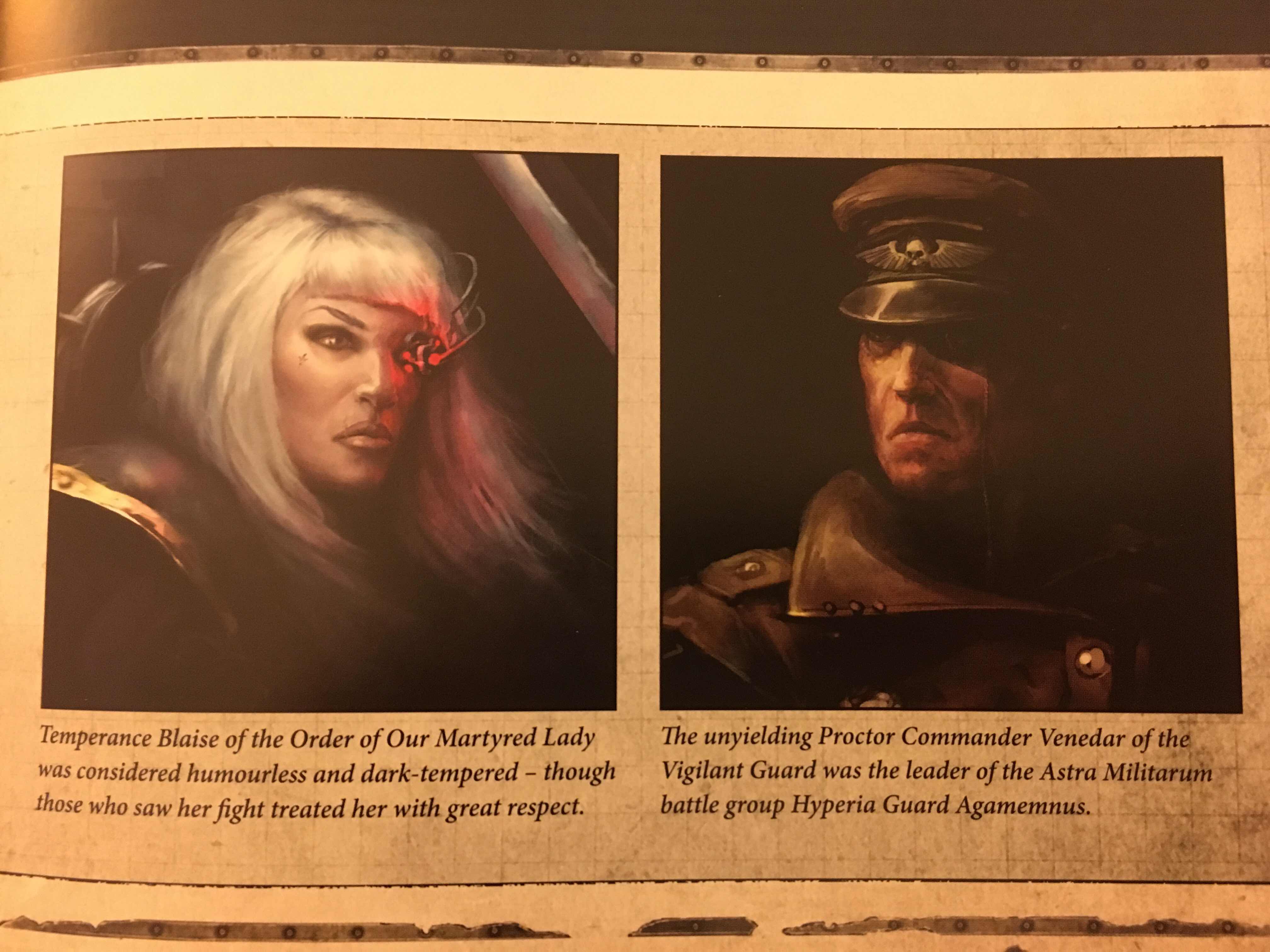 Orks - a lot of Hordes!! Every Clan, caste and sub-culture made it to Vigilus, including Stompa Mobs and Grot Tribes including Squiggoths and Artillery batteries.

Genestealer Cult - All children of Grandsire Wurm. On Vigilus, nearly every Settlement has its own gene-sect or brood cycle (including infiltrated Astra Militarum forces).

Aeldari - Saim Hann were active and other Craftworlds. Spiritseer Qelanaris was the most encountered leader of Aeldari forces. These were both hostile and as allies throughout the conflict.

Personally I don’t usually like Campaign books with such a numerous list of different factions fighting for their own goals, so I’m trying to read this book with an open mindset. I have always been a fan of the Forge World Campaign books and HH Black books where one faction faces off against another, to me it helps with the narrative and also makes it more cinematic. This immediately feels like it’s book 1 of 2 where a battleground has been created to cater for all Collectors to battle over, with a few pages of narrative for their Force “A” where they encounter Force “B” (the one which your buddy has). Let’s see how my opinion changes as I advance through it.

So Vigilus was beset by Orks in a major invasion opposed by myriad regiments of Astra Militarum and Sisters of Battle. Marneus Calgar, came to the defence of the world with the Companies of numerous other Space Marine Chapters.

Roboute Guilliman himself had declared the planet invaluable (probably why Abbadon is heading there in book 2).

The Vigilant Guard (Vigilus’ home Regiment), is a very pious and faithful Regiment who wholeheartedly believe in the God Emperor of Mankind, after crusading or battling often with the Sisters of Battle (no description of what the Vigilant Guard dress like yet).

There are “veins of a strange black mineral” running through the crust. It is being mined by the Adeptus Mechanicus, and sounds distinctively like Black Stone.

The book tells you all about its history since the Cicatrix Maledictum was created. It is one of a couple known routes from Imperium Nihilus to Imperium Sanctus (the other is south of Corinthe in an area of space formerly known as the Thirteen Realms during the Horus Heresy). Chances are, these two areas are rich in Blackstone veins which is the reason they are currently the only stable routes through the Great Rift. 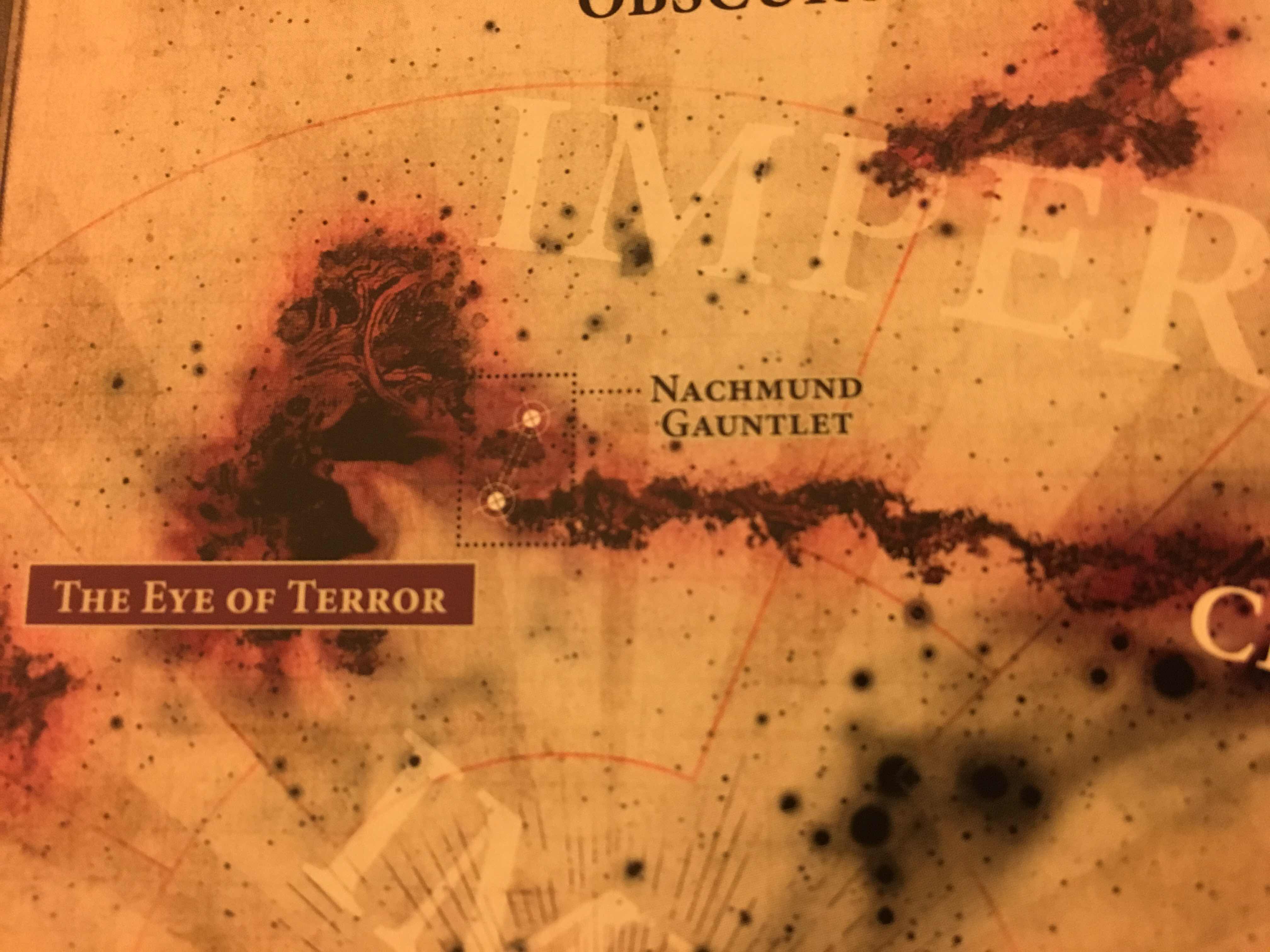 Each town or region of the planet (battlegrounds) have a few pages devoted to setting the scene for the Zone, including its history in the conflict, who on the Imperial side is charged with it’s defence and what forces assail it.

For instance the region of Mortwald is a wealthy realm, used as a Rejuvenat Spa and relaxing getaway for the elite of the Imperium (see the Promotional pict slate below lol), where acres of agricultural land and picturesque forests are (currently) in abundance. The Rejuvenat treatment goes from stripping a few years off to having your head cut off and sutured onto a fresh young body (wow). The Emperor himself even blessed the planet and the Mortwald region due to their works.

The elite dwell within bio domes of pure paradise, with running streams and glistening lakes. The exterior of these domes are dotted with brutal gun-nests and sentry crenellations, to ensure the elite maintained their lavish lifestyle.

The perimeter of the Mortwald region is given over to tank traps, trenches, fortifications and sentry towers. . . . sooooo a good place for the Imperial Fists to rest their boots (which is what happens).

The Imperial Fists under Dravastis Fane, man the defences along Catachan and Chadian Regiments to repel Ork invaders (Stompa Mob, Dread Mob and a Speed Mob).

As with the other warzones, Mortwald has its own War Zone Rules (more about later). This helps set the scene when it comes to fighting in the bio-domes of Mortwald. 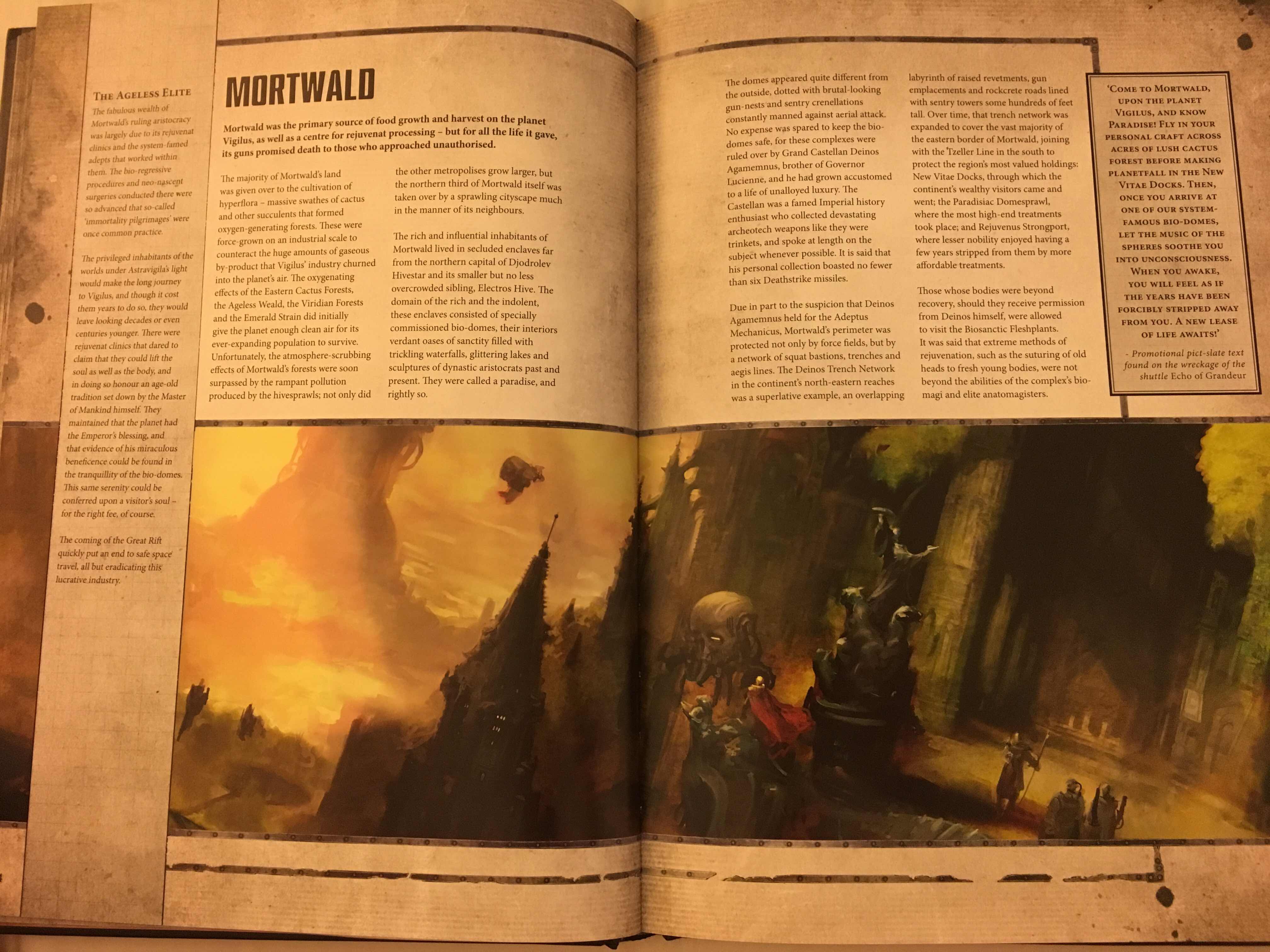 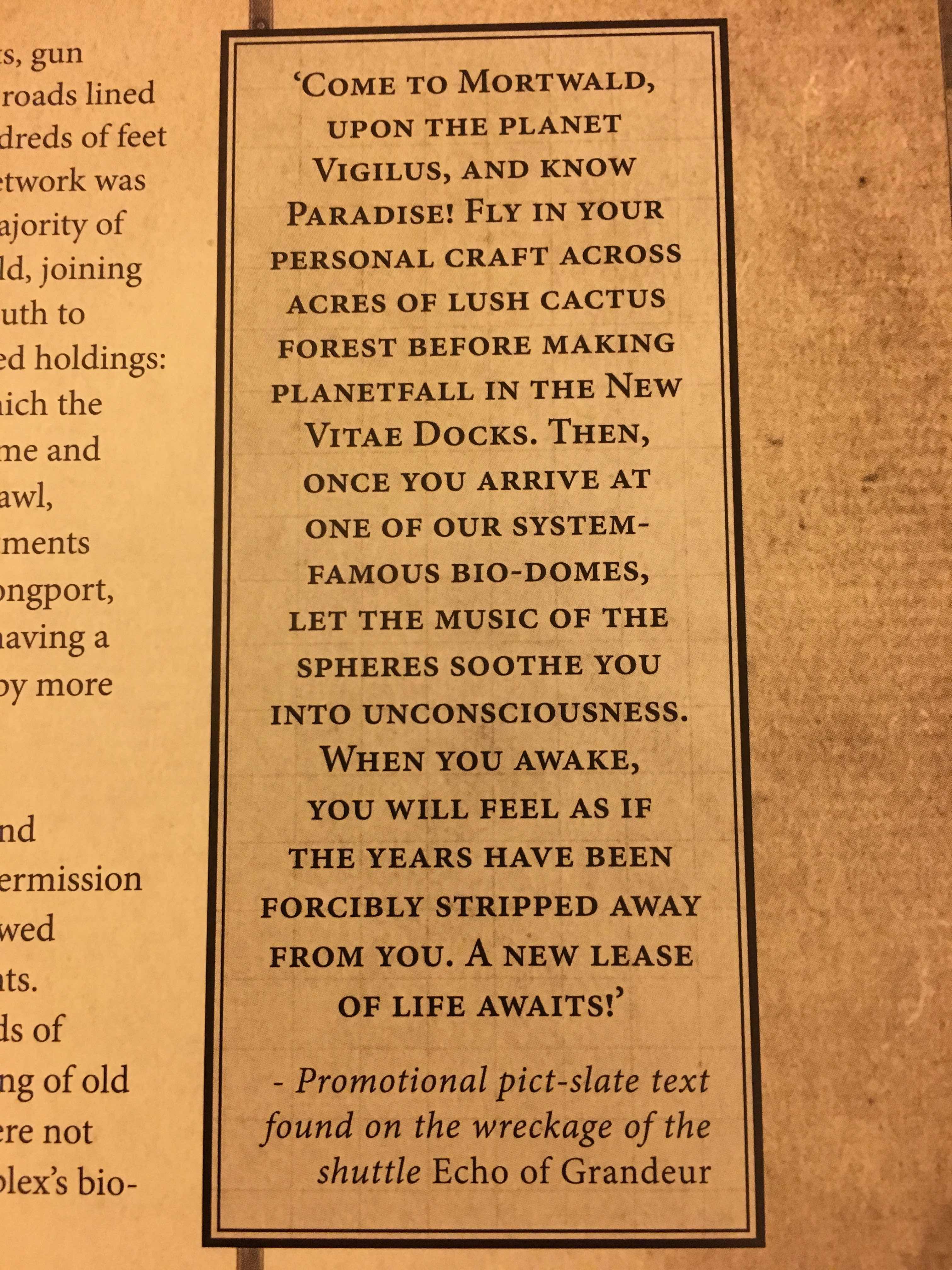 The Orks come crashing out of the Great Rift as soon as it is created. They drop onto the planet and after a brief interlude of racing around the world and infighting (use the Speed Freeks game here lol), start fighting humies.

It is pretty cool to see all of the Race routes all over the planet on the maps. Each tract has a name like Krooldakka’s Warp-Kut and Hyperia Hyperway. These routes often join at their Scrap Cities, which there are around 10 of from the various crash sites. 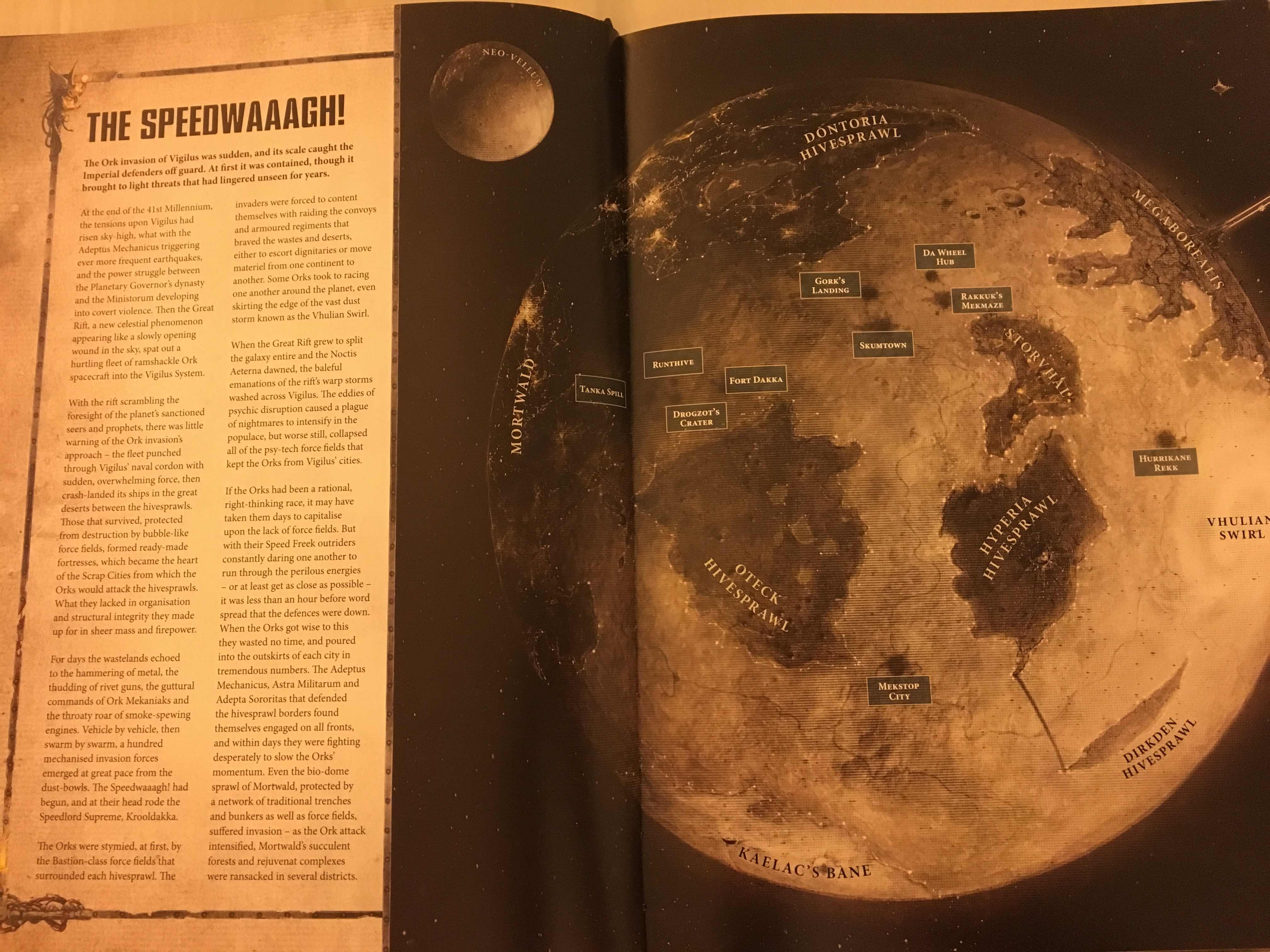 It should be noted that Pedro Kentor is alive and well. Roboute reinforced the Crimson Fists (which were just below 300 strong) with 500 new Primaris Space Marines. This means, the Crimson Fists are no longer on death’s doorstep, and their Chapter is actually further into the Primaris fold now than many other Chapters. I’m sure it won’t be long before Pedro takes the upgrade to Primaris either.

They have lots of new equipment too. 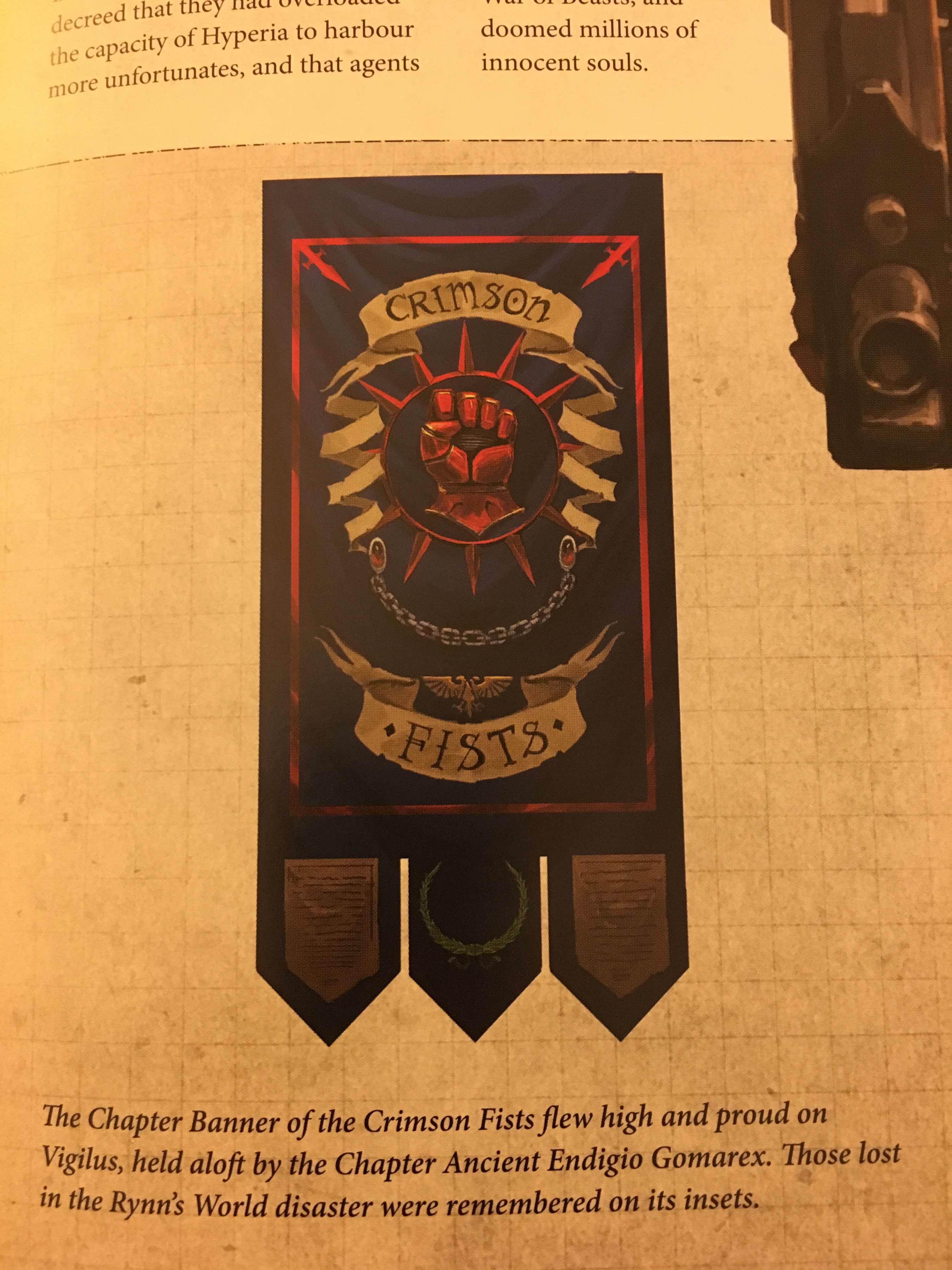 This section of the Campaign book lets you generate a battlefield which best befits the region in which you are Campaigning through. Also, it could be a good place to start to help you plan your Campaign (if you are limited to a particular terrain set for your gaming board, you could choose which is best for you before planning your Campaign).

It also allows you to set up perimeter games for those zones which butt up to another type of War zone (Industrial connecting to wastes for example).

You then divide the table into 6x 2’x2’ sections and roll on a scenery table. Mortwald is a place of exotic Fauna and military defence lines and Bastions, so this makes up the majority of the list. 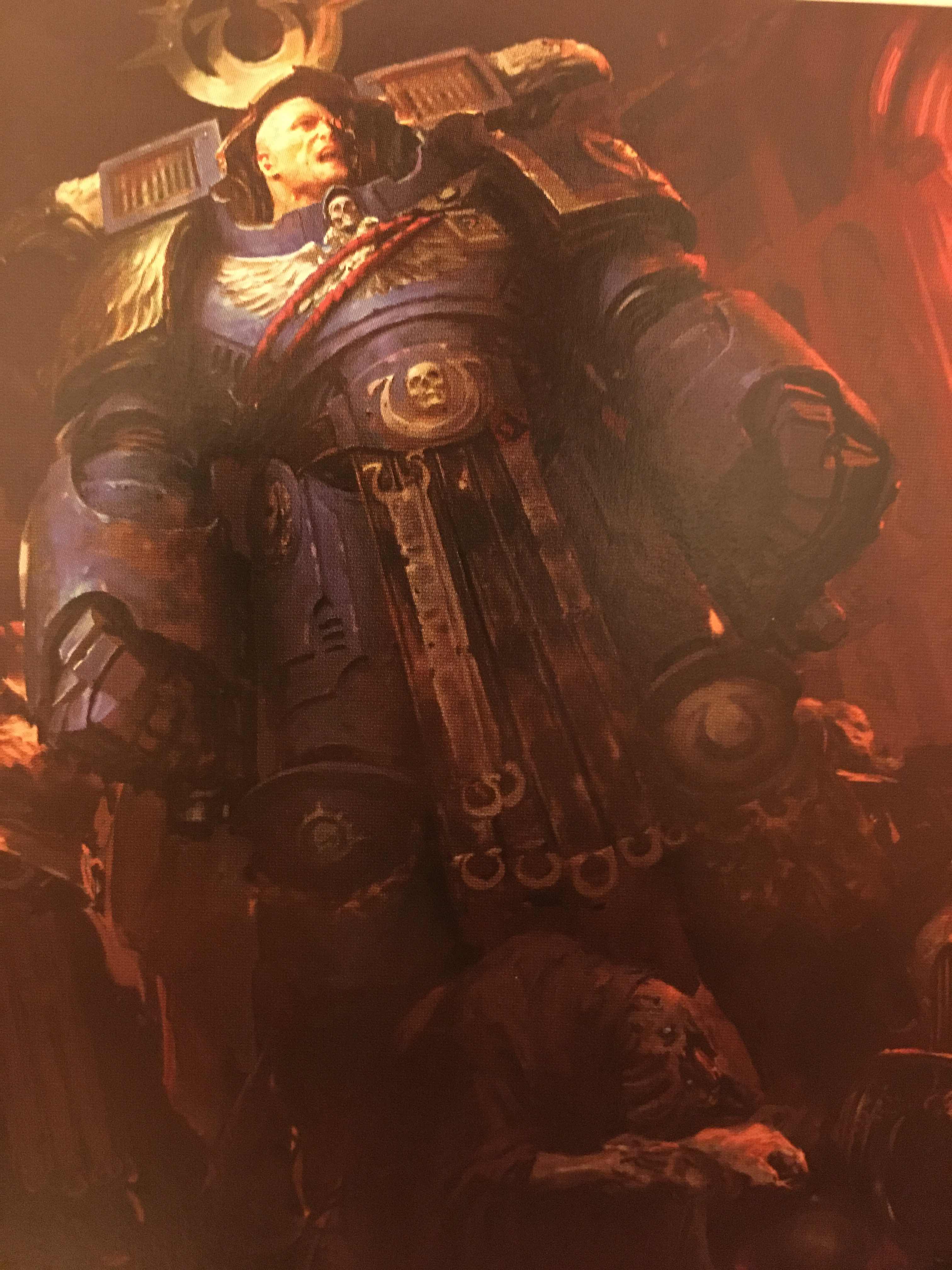 “He was the first to undergo the extremely risky surgery to transform a Traditional Space Marine into a Primaris Marine,”

He has a toughness of 5 now and 8 wounds. The Armour of Heraclus halfs all damage received by half rounding up, but is otherwise MK X Graves with a 2+/4+.

If your army is Battle-forged you will have access to the Specialist Detachment Stratagems in this section.

This SD represents the Primaris Marines who Crusaded with Roboute during the Indomitus Crusade. 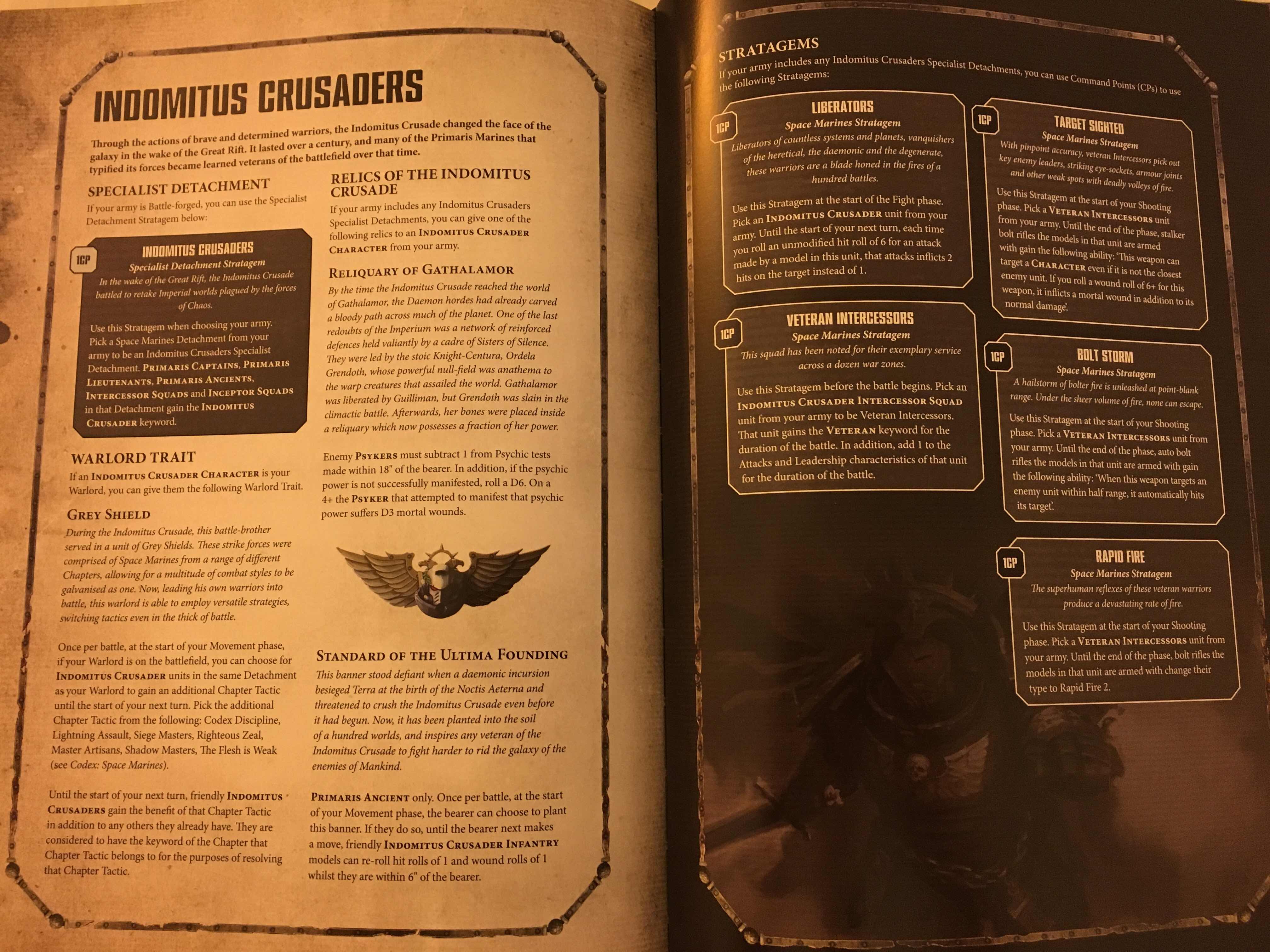 I like this one a fair bit, especially the Grey Shield bit. It’s a bit Grey Knight, a bit Deathwatch.

The book has four pages devoted to 4x Chapters of Primaris Marines found in the Indomitus Crusade. These Chapters do look good, and the source images generally give you enough info to field them as an army (marking examples etc). I think what would have been a good touch, is for the author to have expanded on these Chapters a bit more, a bit like as in the FW Black Book Series. Adding more character to the still relatively fresh and new Primaris Marines Chapters, can only be a good thing. Very pleased they moved away from the cartoony imagery too!! 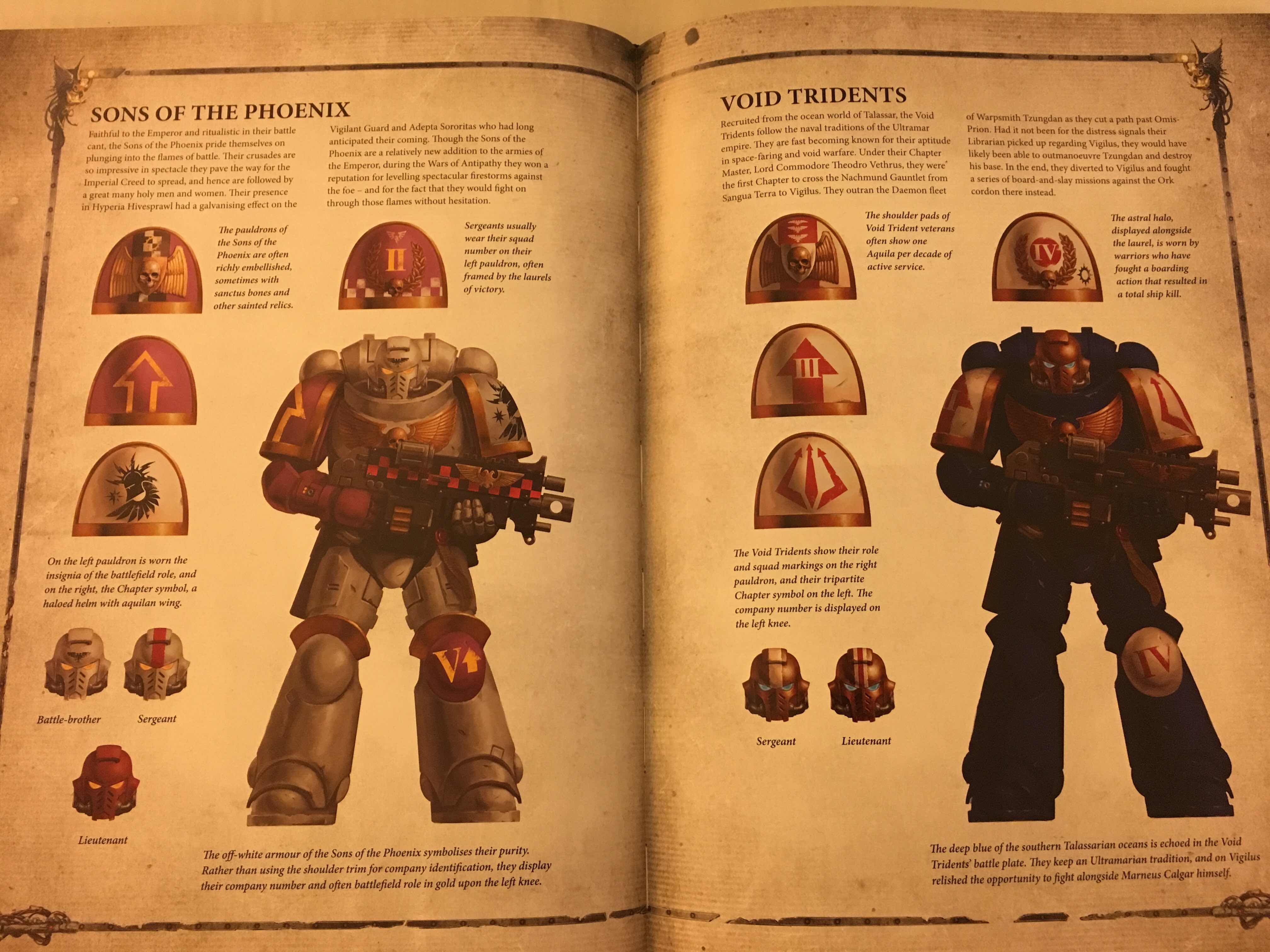 This Campaign system is a pretty cool system. It’s a linear system which advances with the timeline, where it gives you a quite relaxed approach to running a Campaign, yet with a fair bit of depth. It recommends which scenarios are played during each round (a round is what ever best suits your gaming group and can be as long as whatever is agreed). Each round also has special rules, for instance Round 3 has a special rule: Rise from the Shadows; add 1 to hit rolls for shooting attacks made by Genestealer Cult units that target the closest enemy unit.

The victor is decided by amassing Glory points which can be achieved by winning, fighting on a Vigilus Battlezone/Vigilus Mission or Bonus objectives. This book contains 3 Phases of the War of Beasts Campaign, each of which has 6 rounds. 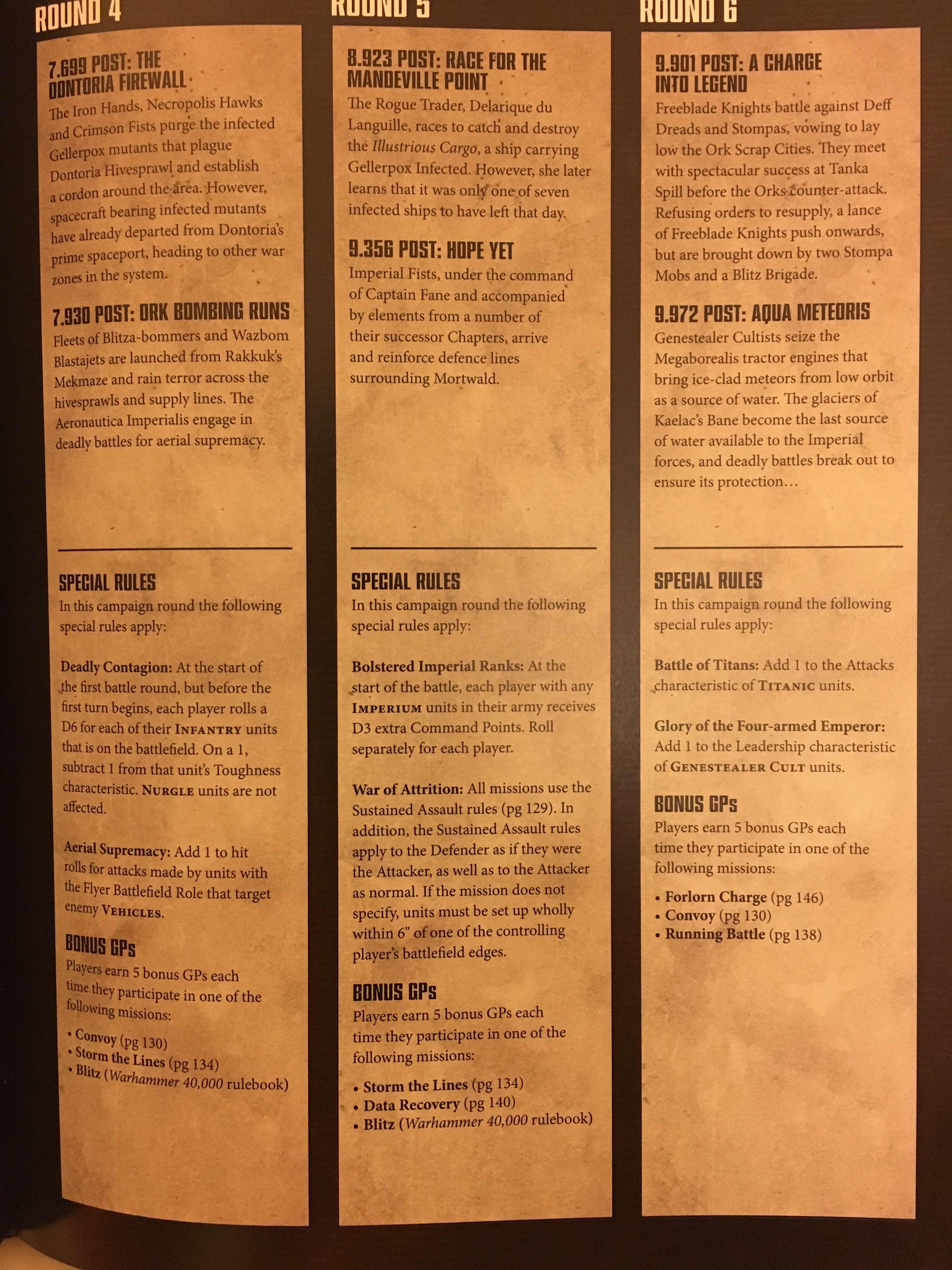 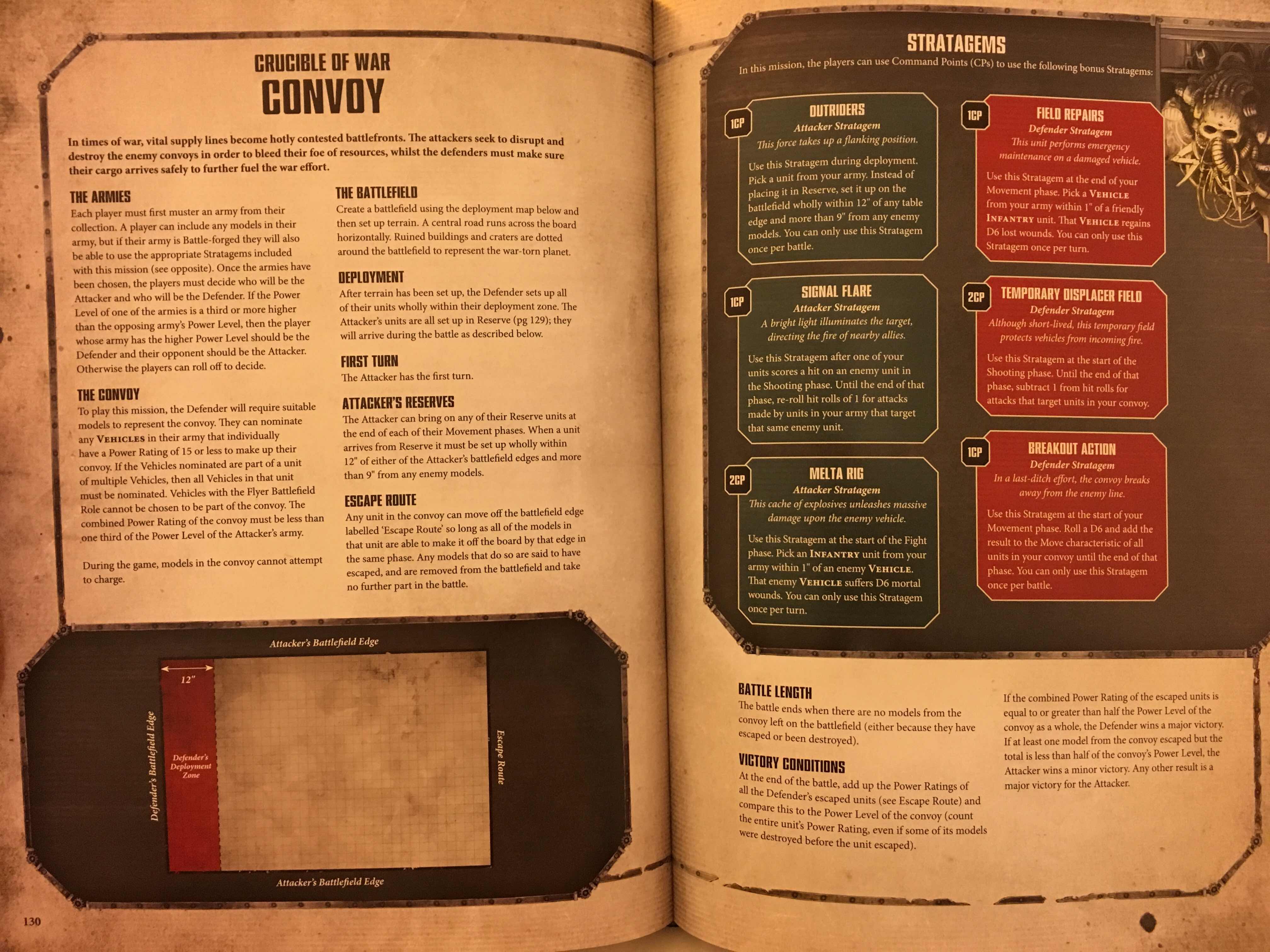 It also has a Campaigns in the Dark Imperium section which adds a series of unfortunate events to your Campaign rounds. These can be planned/drawn randomly/rolled on/ chosen by the victor or loser of previous round etc. They add some really decent and simple touches too. 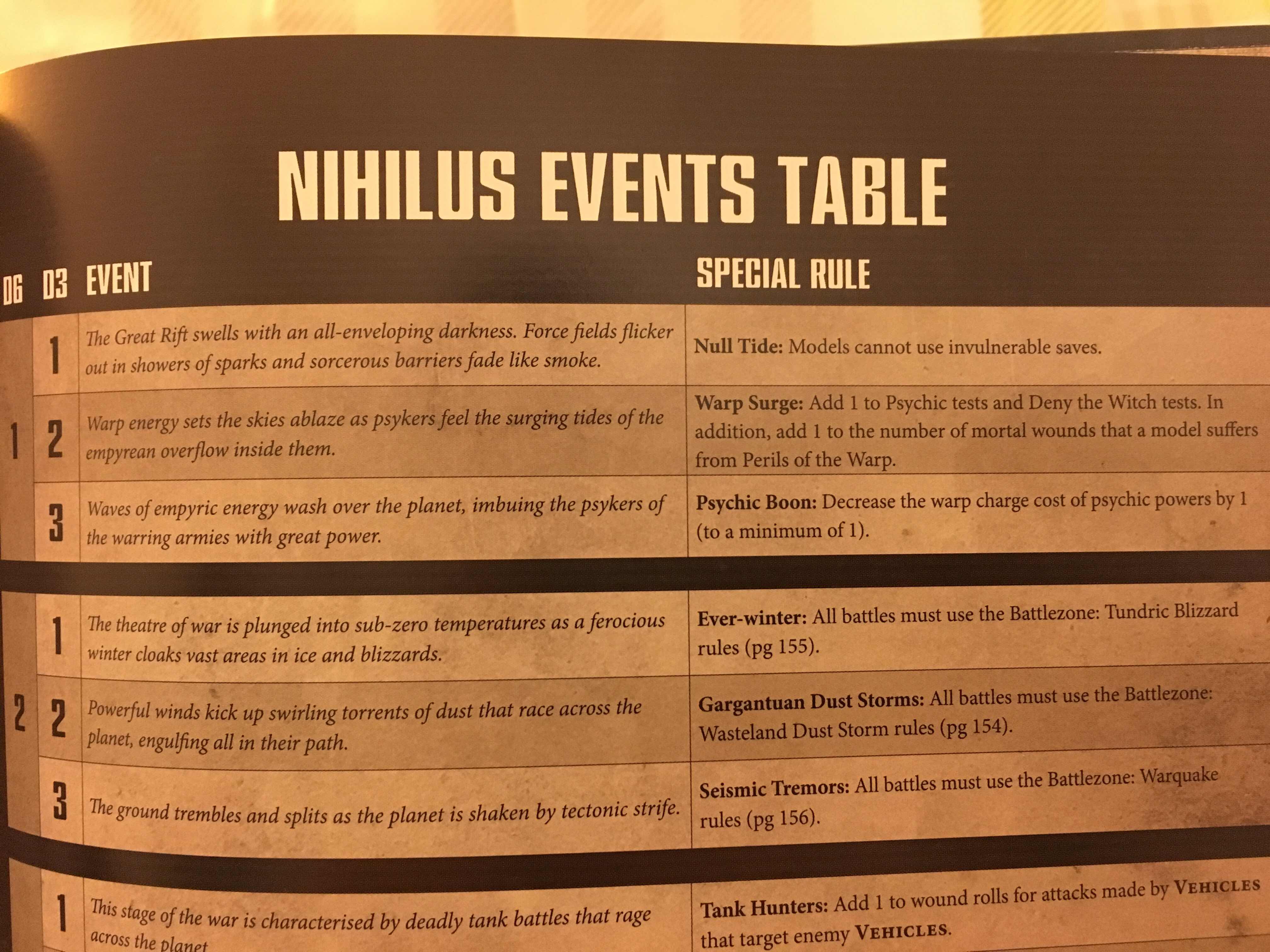 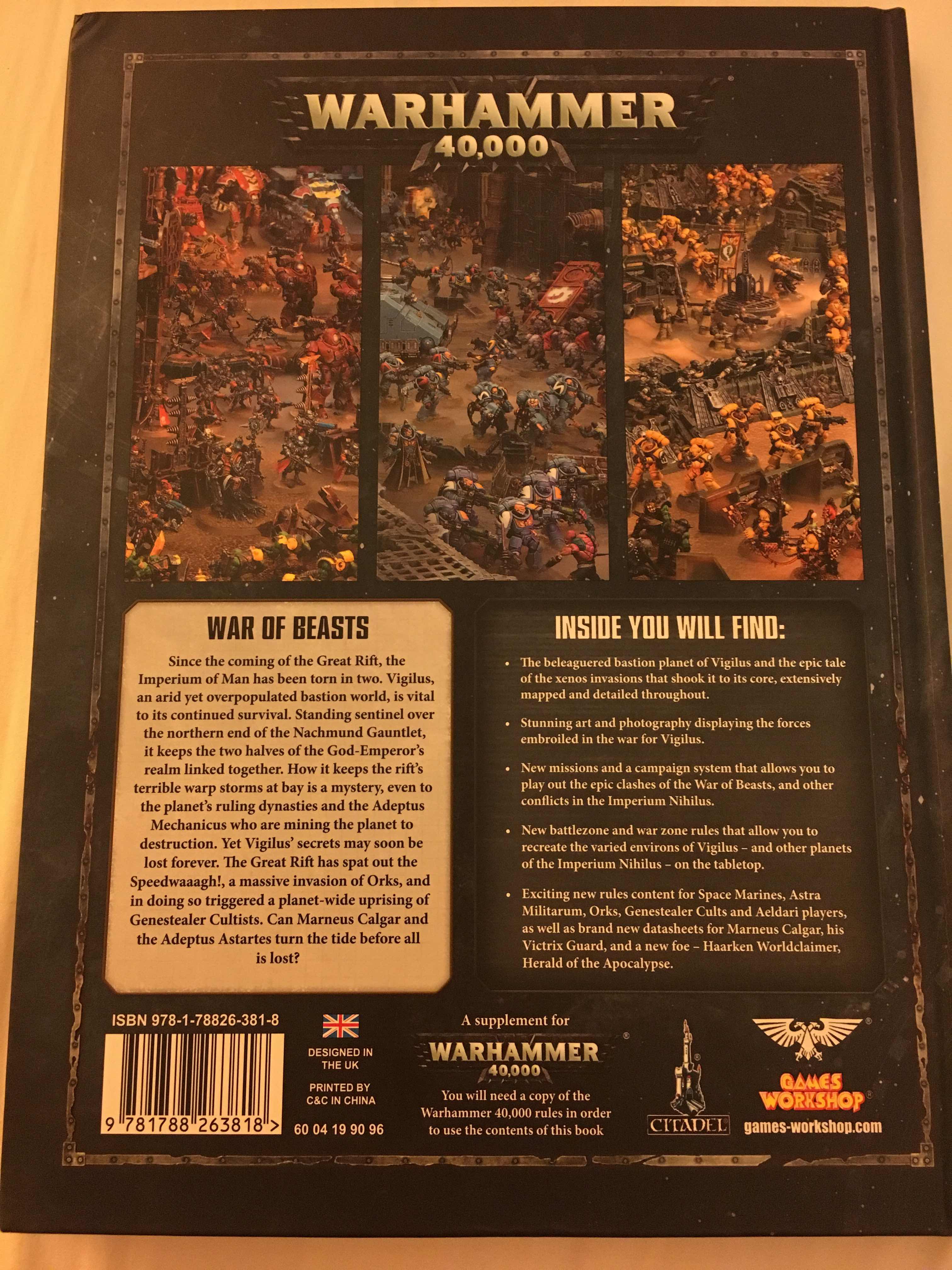 Well all in all it’s a great book. The Campaign system is simple and easy to understand, but still adds some great depth and detail without managing to complicate the structure. The additional missions will go down really well (as we all love new missions).

I still think it is a bit overcrowded as Campaign books go, I do prefer two forces with different sub armies, as I think you can set more of a scene.

The book is very very well written, and you can tell a lot of effort has gone in to making it a polished book, akin in quality of writing and lore to that of the FW Black Books. I hope they keep this standard up!