The War for Antemurale - A Narrative Campaign

I have been busy at late creating a narrative campaign to run at my local club; The Bastion Gaming Club in Basingstoke. A few of us at the club have been keen 30k gamers for a long time but have not played that many games recently. So as away to encourage us to get models on the table and push army painting on, along with getting others at the club involved, I set out to make a narrative campaign.

I had played a fantastic event in Norwich with the team from 'Conflict Norwich'. I decided this would be a great place to start and got in touch with them, they very kindly sent me a load of the material that they had used for the event. The event ran smoothly and was straight forward to play in. These were the key things I was looking for to keep it simple for our members as quite a few hadn't played 30k before.

First up was setting up a narrative and location for the campaign to take place, so with the help of Drake and Ikthelion we created the Antemurale System. 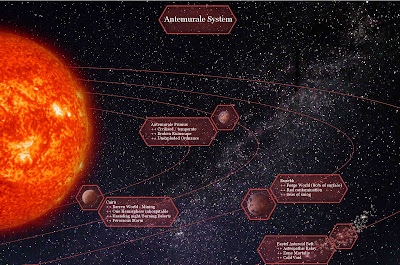 This awesome piece of work was done by Drake. It lays out the system and the war zones to be found in it. With the system in place, up next was creating some fluff to go with it. So here is the opening paragraphs of the campaign pack;

Confusion now reigned over the galaxy.

The events at Istvaan III and V had shaken the Imperium to it’s core.The bright future that the armies of the Imperium had been fighting for was now in doubt. Brother had turned on Brother. Legion had turned on legion. Civil War was beginning to consume the galaxy.

The galaxy was starting to burn.

The days, weeks and months following the tragic betrayal of the Warmaster, were full of confusion. Trust, that once was never doubted, now was. Alliances were being formed and broken across Star Systems and Sectors of space as the various forces declared who they now fought for.

No one remained untouched by treachery.

In the Antemurale system a large selection of forces had mustered in preparation for a campaign of compliance in the wider Lepus Sector. The world of Antemurale Prime had been brought to compliance in a bitter fight that had turned much of the Hive world into a ruin. The peace the planet had only just found was about to shatterer as the civil war arrived in the system with it’s full fury.

Darkness and betrayal had arrive in Antemurale.

This set the scene. Next I wanted expand on this by giving each of the locations a different feel to the others, so I created a brief backstory them all that explains what value they are to forces on each side of the conflict. Using the war zones laid out in Conquest and those used by the Conflict Norwich team, I gathered up the ones that would best represent the locations in the system. Below is a sample of one of the pages from the finished pack detailing some of the war zones that will be in use. 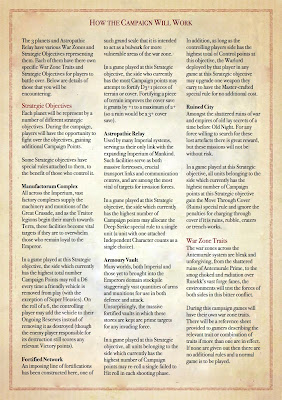 Lastly was setting out the rules for the campaign. As it is to be run at the club with varying levels of experience I wanted to keep it simple. So it is simply Traitors vs Loyalists and the side that earns the most campaign points will be the ultimate winner. I really liked the scoring system used by Conflict Norwich, so I made use of this system.

The campaign is intended to be story driven so having several ways to score campaign points is key to help keep the power gaming low. While winning earns a good amount of campaign points, It is entirely possible to lose a game but actually earn your side more points. The picture below is the campaign scoring box from the pack. 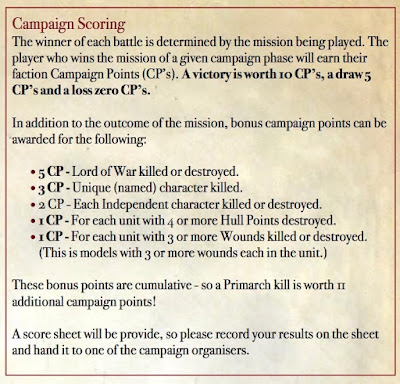 Characters are key to all great stories and each player was asked to bring along a non-unique character to progress through the campaign. Using a variation of the Conquest Campaign system and the one created for the Conflict Norwich event, I laid out a set of progression rules and ways for each character to gain extra abilities and stats. Each character gets one upgrade at the start of the campaign, as well as generating a warlord trait for the whole campaign rather than rolling each game.

I am also asking the players to record the awesome (and not so awesome!) feats that their character does across the course of the campaign so that I can share them here and on our clubs Facebook page.

With all this hard work put into the campaign pack we wanted the players to have something special to take home and use during its course so we got the pack printed and bound. 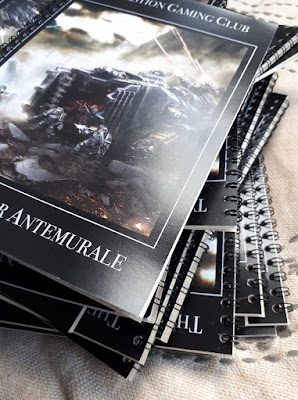 Game one has now been played, with 10 players on the first day and another 2 coming to join for game 2. As several of those playing hadn't player 30k in a long time or not at all we had a game of doubles to help those who need to know or remember how to play! The points level were small to help with the learning, at 1000 points each. I also didn't make use of the war zone traits yet to keep it simple. The points will increase with each game and I will gradually add in the extra rules as players gain more confidence with the ruleset.

It was a quiet night for the characters, with their armies causing the bulk of damage, so no cool stories to tell yet. We do have a nice selection of legions playing and they should create some fun match ups! 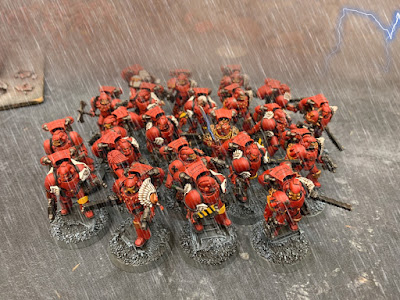 Once the dust had settled, it was clear it was a bloody fight! The Traitors ended up coming away with the early lead; 20-15.

Have any of you run or played in a narrative campaign? What was your favourite part or suggestion you could offer?

Darien
Posted by Darien Vasco at 09:00