Long time follows maybe aware that I have been gathering up a Forgeworld Zone Mortalis Board. Well over the last 2ish years I have spent a ridiculous amount of time finally getting it painted!

Thankfully one of friends leant a hand and did an awful lot of work to help me with the base colours! So thank you!!

We started with spray cans! Many spray cans! 2 large Halfords grey primers, 4 cans of Halfords silvers and another 1 and half of a lighter silver.

The grey primer laid down. 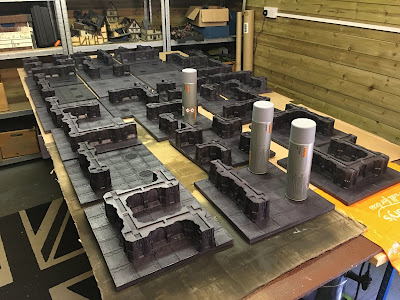 Next up a dark silver spray can all over the tiles. 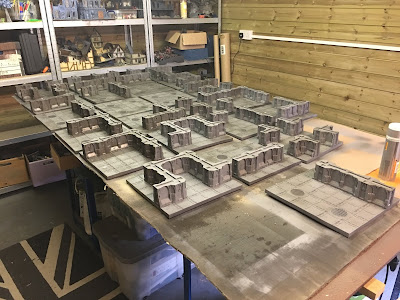 Then a zenith with the lighter silver on all the walls and vents to give them a nice fade. 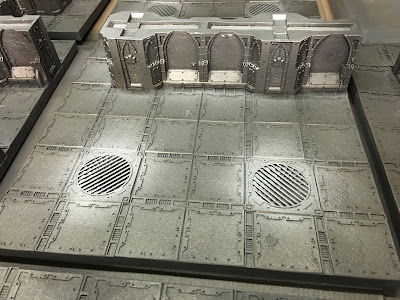 Unbelievable this part only took an afternoon to complete! Let me tell you, I was feeling pretty good about the painting at this point! How wrong can you get!! 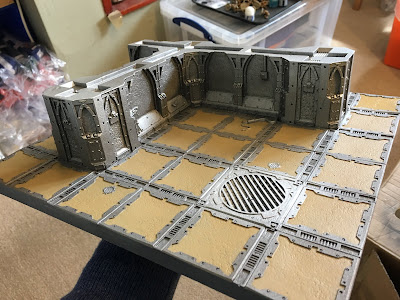 Next we spent a really long time filling in all the floor tiles by hand. Yes we did all 24 tiles by hand at this point. We spent a good long while discussing how to proceed with this and ultimately decided that by hand would be the neatest option and the least likely way to end up requiring touch ups on the silvers. This was so long! Each tile took about an hour to fill the floor. We used about 6-8 pots of GW Zandri Dust. This very nearly tipped me over the edge of quitting painting it all!

With that done we then had to do the walls! We did this the same way as above. This was at least quicker than the floor but still took a good 30 minutes per tile. 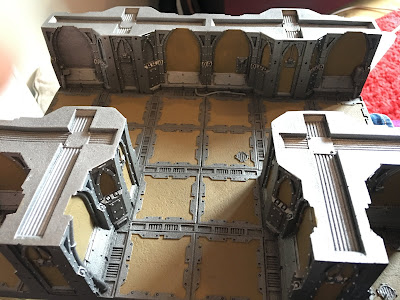 It was great to get to the end of this part! The end sort of felt in sight, that is until you start listing the bits that need doing! Next I filled in all the 'pipes' on the top of the tiles with Hushnut Copper. Surprising quick this step! 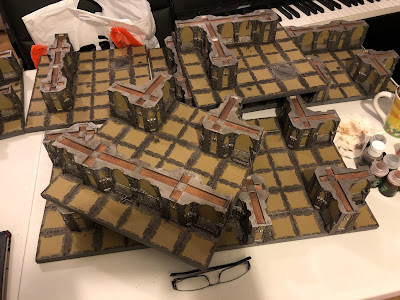 Next was the messy part. I created a wash (with Drake's recommendation) of Nuln Oil, Agrax earthshade and Lahmian Medium. I brought 4 pots of each and poured them into a small Clip Lock box for ease. I slapped this on all over the tiles! I started with the floors, left them to dry then went back and did the walls. I did it that way to avoid tilting the tiles with the floor or walls washed in the hopes of avoiding the wash drying oddly.

Then it was onto the airbrushing. I filled each floor and wall part in with Vallejo Bone white. Spraying carefully to avoid the silvers and leaving the zandri dust showing slight around the edges. Again this took at least 30 minutes a tile. I made sure a sprayed the walls from above with the Bone White to create a fading effect.

Dry brushing was next. I used Runefang steel, I think, to dry brush all of the silver left showing. I was careful to do my best to avoid the now finished floor and walls. After this a used Abaddon black to stipple around all the large and small vents found on the tiles, as well as the cables.  This was to create a sooty wore look around them.

Then I airbrushed the lights around all the walls. I used a selection of Vallejo reds to do this, Starting close to the light and pulling the airbrush back to create a OSL type look to them. I added in a lighter red on top, mainly just over the light and then added a quick orange as a final highlight on the light itself.

Lastly I painted the details. The Eagles found on various parts of the walls with the Hashnut again and the small terminals with some greens, whites and reds.

This is a final tile. 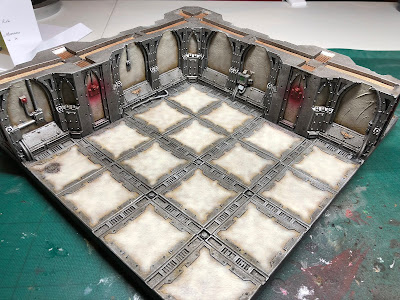 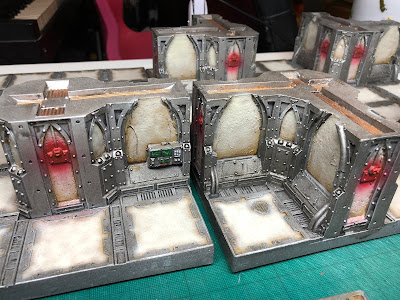 The whole board set up. 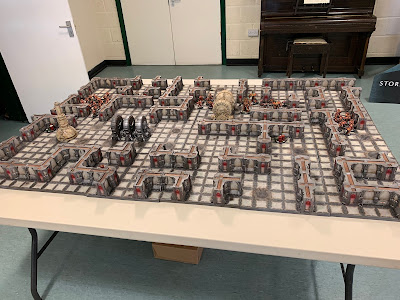 Some closer ups of it set up. 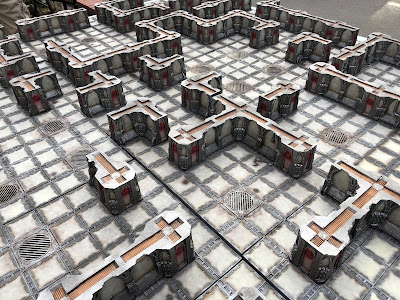 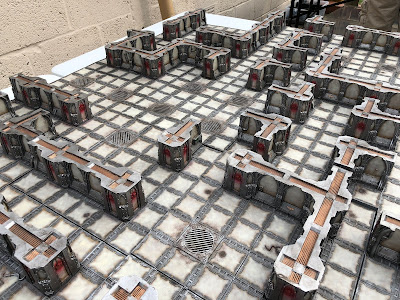 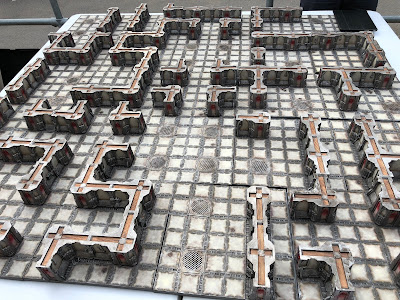 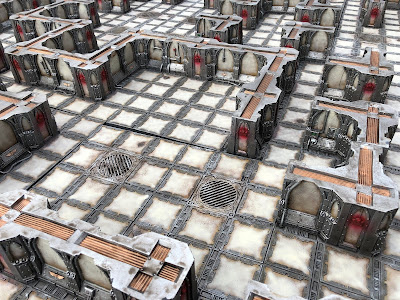 The final thing to do was the doors! I did these in the same way as the walls. Luckily I had just enough paint left in the spray cans! 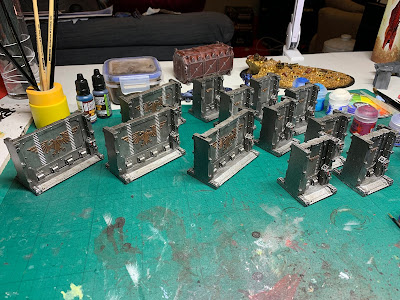 I started in September 2017 and had the board done without doors in August 2018. I didn't paint any other models in that time. I added the doors this year in february, which took a couple of days.

Overall it was a right pain in the arse to paint!! A never ending pit of despair!! Many times I thought about giving up. It really put me off painting and the hobby as a whole for good long while. Having said that, it does look fantastic on a table and it is great to play on! So that has sort of balance the pain back out!

I will definitely be looking to purchase terrain pre painted from now on! I love painting but I found this a real chore and it lost me my passion for painting.

I would recommend thinking twice about this if you're going to it. Yes it looks amazing on when done but it is a major commitment and will really suck away a huge portion of your hobby time! I didn't really think about it when I brought it all, as it is so awesome. However knowing what I know now I'm not sure that if I was to do it again if I would.

Then again it looks seriously cool and I'm really pleased with it! I love playing on it!

Has anyone else painted a Zone Mortalis? Did you find it as horrible as me?