Sons of Horus First Company Update 6 and Dreadnought's in 30k

Todays post has two elements, firstly I will be introducing Brother Sevyon, the latest addition to my Sons of Horus First Company. Secondly SuperHeavy commented in a recent post that they would like to see the Bunnies do a guide to dreadnoughts in 30k, so we have obliged!

Brother Sevyon has served with the First Company for over a 100 years whilst interred within a Contemoptor dreadnought. He originally served within one of the many Reaver squads. 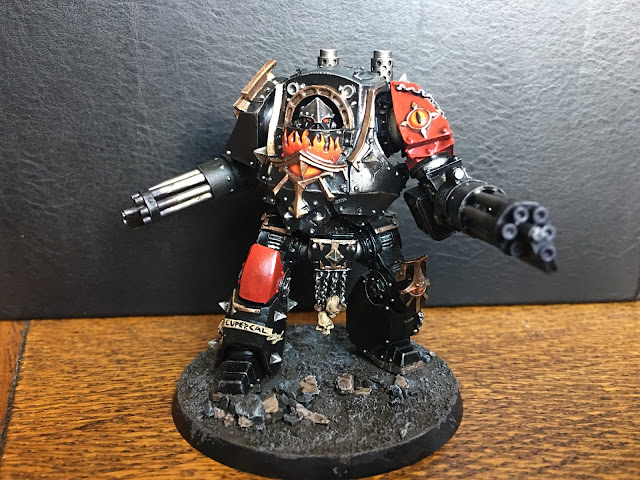 During a campaign against a forgeworld resisting compliance the transport Sevyon was travelling in was destroyed by lascannon fire. The resulting explosion very nearly killed Sevyon. His body was left so badly broken that the only option the legion apothecaries had was to place him within a dreadnought. 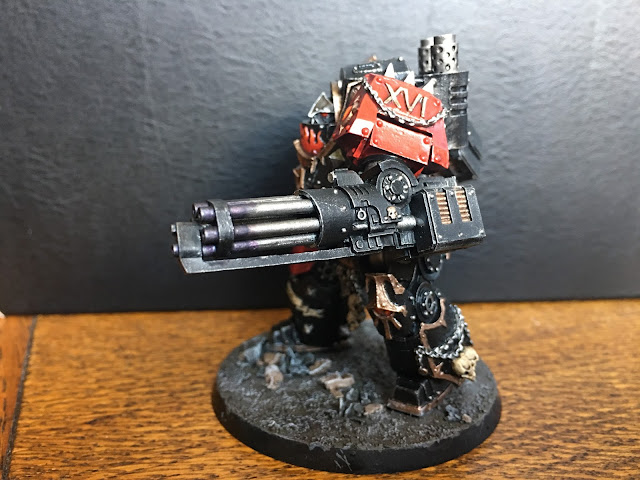 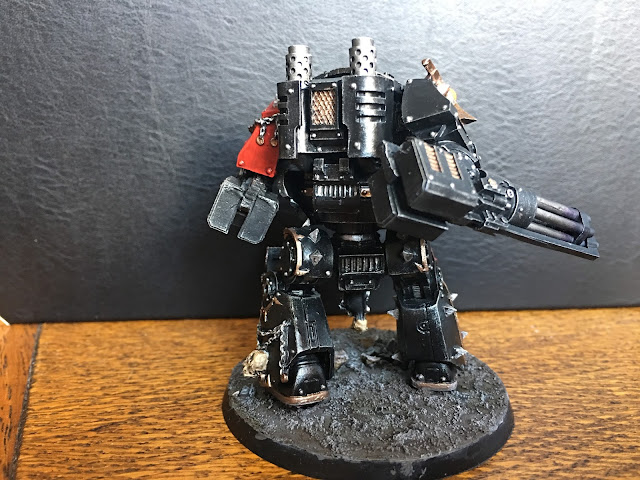 Sevyon had always gone to war carrying a specialist weapon with his Reaver squad. His love of guns with high firepower translated over to his preferred load out for his Contemptor, where he most regular goes to war with 2 Kheres pattern assault cannons. 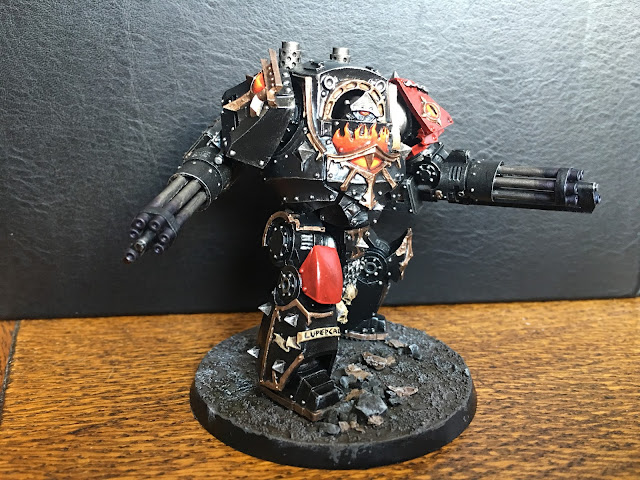 Sevyon can always be found where the fighting is thickest and where he can use his heavy fire to support the squads engaging in close combat. Ensuring that there flanks are clear and assisting in thinning the ranks of infantry before any charges might happen.

The list of dreadnoughts available for the legions to field in 30k consists of 7 variations. I will provide a brief overview of each of the options and how you could potentially make use of them in your games. We Bunnies are not tournament gamers or power games and as such we don't make choices based on what is going to be the most deadly or effective. We make our choices based off what suits our legions in terms of fluff and what looks cool!

Many of the variations available to the legions can come in Talons. A dreadnought talon consists of 1-3 dreadnoughts of that variation. This is a useful rule as it allows you to fit more dreadnoughts into your lists without compromising your ability to take other elite or heavy support options. The main restriction to this rule is that all dreadnoughts in the talon must by deployed within 6 inches of each other, either at the start of the game or when arriving from reserve (this rule is not available if you place your dreads in drop pods, meaning you can only take a talon of one if you do this). After deployment they can operate independently and are not treated as a squadron. 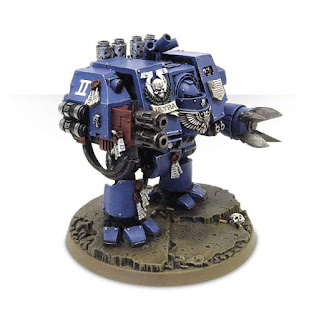 The 'standard' dreadnought, you most likely know this one from 40k. This is a versatile choice and can be armed with a wide choice of options. It has been recently FAQ'ed by Forgeworld gaining an extra attack but losing 1 in  ballistic skill. This choice comes with a low points cost but isn't any where near as survivable as a Contemptor. As such I would recommend keeping them low in points and keep them multi function, perhaps an autocannon and a close combat weapon with built in flamer. A multi-melta would also be a useful choice but has less shots than the autocannon. For me this is more a choice more iconic with 40k than 30k and as such would be a the bottom of my list for things to take. 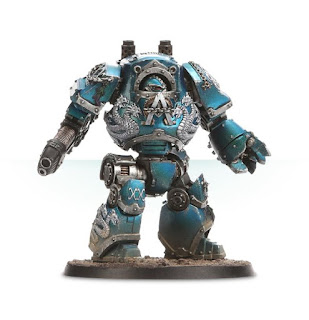 Regarded by many as the most powerful and advanced pattern of dreadnought available to the legions. It makes use of a powerful arc-reactor, generating an abundance of power allowing it to be stronger and faster and generate a defensive energy field. This translates to a invulnerable save, a higher strength and the fleet special rule. This is perhaps the most iconic choice for use in 30k and it is hugely versatile and can be armed with a list of great weaponry. It has a higher point cost than the standard dread but is basically better in every way! It you want to add dreads to your army this is the place to start! They will fit in with most legions and can be armed in so many different ways. Be sure to arm them in a manor that fits with your armies fluff. For example a World Eaters contemptor would most likely be armed with 2 close combat weapons. In comparison a Iron Hands version would be armed with more heavy fire power, such as a Conversion Beamer or lascannon.

Contemptor-Cortus Class Dreadnought Talon - Elite choice
A new addition to the legion army list it is basically a stripped down Contemptor, in fact it shares the same model (it would be best represented by a non legion specific model). This class was first created on Ullanor to replace battlefield losses and made use of many of the Contemptors main parts but some where replaced with less powerful but more replaceable options. Post Ullanor this variation was phased out as the Mechanicum caught up with the production of the prime Contemptor. The heresy saw this variation making a return as legions struggled with supplies. This option would be a great choice if you're representing a shattered legion or a legion caught up in a long and bloody campaign deep in the heresy. If you're doing a Great crusade force this would not be a good choice. In terms of load out you are restricted to a ranged weapon and a close combat weapon. Again go with the best choice for your legion. A Salamanders shattered legion force containing a Cortus would most likely be armed with Multi-melta to go with the close combat weapon with heavy flamer built in. The Cortus' stat line isn't as good as the contemptor and its invulnerable save is only on its front facing and provides no protection is close combat. It makes up for this in a lower points cost.

Legion Mortis Dreadnought - Elite choice
Essentially the same as its non Mortis variation, however it doesn't come in a talon. If you do not move or run the dreadnought then you gain the Skyfire and Interceptor special rules. It comes with 2 shooting weapons, that work out lower in points than the standard variation. A great choice if you face a lot of flyers and 2 autocannons would work very well for this. They are not as versatile as the non Mortis version and they are not as effective in shooting flyers down as a Deredeo would be.

Legion Contemptor Mortis Dreadnought - Elite choice
The same as the Legion Mortis but with a Contemptor body. 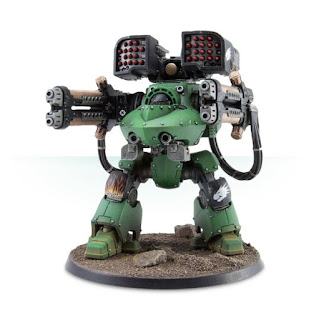 Created using many of the same components as the hugely successful contemptor class but rather than being a general assault unit, it is a dedicated heavy weapons platform. It was deployed to all legions in limited numbers due to the difficulty in producing and maintaining them. As the heresy went on they became in high demand from both traitors and loyalists. The Deredeo has access to the same Helical targeting array as the Mortis class, allowing it to gain Skyfire and Interceptor rules. It is a better choice for anti-air than the Mortis but does take up a heavy support slot. All of its weapon choices are great and you can't go wrong with either. As a change to being a static heavy weapon dread you could give it Automatic Pavaise, this is a reinforced shield that increases the Deredeo's invulnerable save and grants friendly infantry within 3 inches a +1 to their invulnerable save to a max of 3+. As such you could use it as a walking fire support unit for a unit like cataphractti terminators providing them more survivability as they walk across the table and giving a good fire power base. 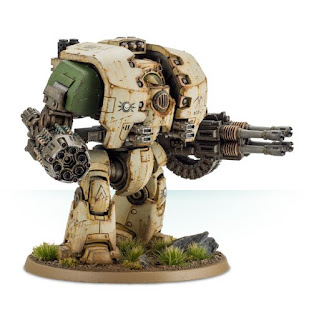 Another new addition to the legion army list. It was developed in secrecy on Terra, and rumoured that it may have even by the Emperors hand directly. It was made available to the legions in limited quantities before the outbreak of the heresy. The design caused a great amount of stress on their occupants and was often lethal to those interred. During the heresy the loyalist based on Terra were able to secure new version of the Leviathan. The traitors were limited to what they already had or what could be scavenged from the battle and recommissioning. This is an incredibly powerful dread with great survivability and some very powerful weapon load outs. All this comes with a high points cost. Load them up with as many of the extra options as you can as they are all useful and I would go with one shooting and one close combat weapon to keep them more versatile. It is a great addition to those legions that are unrelenting or specialise in siege warfare but perhaps not to those that prefer lightning strike attacks like Raven Guard.

Your own Dreadnoughts
When creating your dreadnoughts for your legion remember they aren't a robot but rather a robotic walker piloted by an interred marine. The piloting marines body has been injured beyond anything an apothecary can repair and the only chance for survival is being interred within the sarcophagus of a dreadnought. As such dreadnoughts have character and it can really help to bring these great legends to life by naming them and providing them with a backstory, then playing them in a way that corresponds to their fluff. Go with choices that fit your legion and that you like the look of! Arm them with weapons that your legion would make use of and provide you with the support that you require. Many of the dreads are best used as close support for infantry and can really sure up your forces. The Contemptor and Leviathan are extremely tough and can draw a lot of fire power so put them in areas that force your opponent to deal with them. This will help your other units out a lot by taking fire for them. Mortis and Deredeo's offer a lot of fire power and can be used to create a strong defensive position. The legion and Cortus are the lower points options that can provide some heavy fire power but lack the survivability of the other options.

How do you use your dreadnoughts and what are your favourite choices for your legion?