The Gods of Graia rise

Good evening everyone - sorry for the late posting but as you'll see I've been working on a bigger than normal model today.

You may remember a while ago I posted about my growing titan legion maniple for Legio Astraman. The maniple currently stands at 2 Reavers and 2 Warhounds in various stages of finish. I believe Legio Mortis is itching for a smack down so I really want to get the big greens ready to march at Warhammer World. My maniple will feature 5 Reavers in total and as such I have lots of weapon options to switch around in the maniple. Recently I have been working on the two fists for the reavers, I really like the look of the double fist (even if it's not that practical) and considering it's a force to square up to other titan maniples the combat bonuses of having the two combat weapons may come in handy (pun intended). 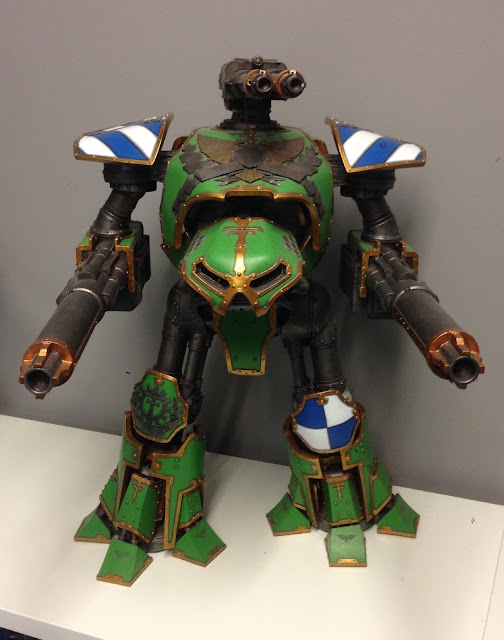 Here's the nearly completed head, with the gold trim and detailing to complete. 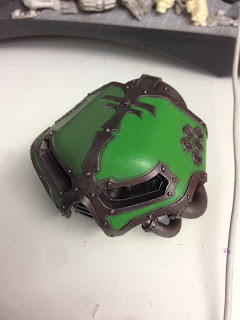 I built the fists as sub assemblies. The main unit was built and tested against the body builds to ensure a natural or slightly aggressive pose and each of the fingers is a separate part (mainly for ease of painting).

I went for a closed fist arrangement as I felt this worked best when the fists are paired on one engine. this was fairly easy to do as once one finger was positioned I could then use that as a template to fix the others together. 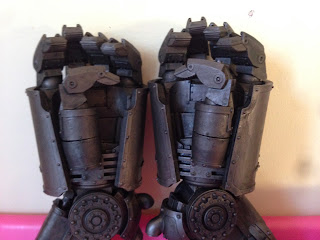 As with the rest of my god engines the painting was the same. Halfords black primer, my titan metal mix (see previous post) with the inclusion of Lahmian medium to make the paint flow - as when I first started the titans the majority of the mix wasn't base paints as they are now. Once dry I washed with Nuln Oil and then dry brushed with Leadbelcher. 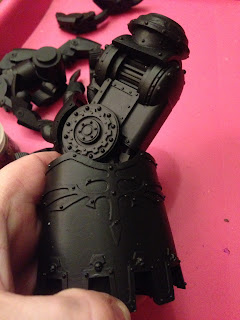 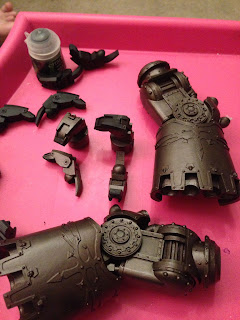 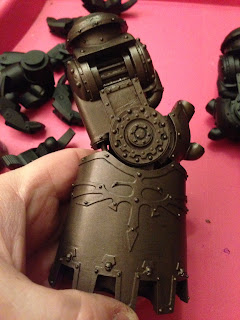 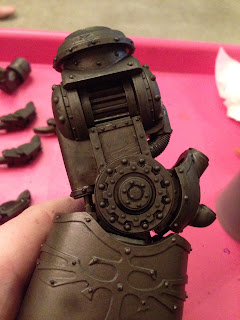 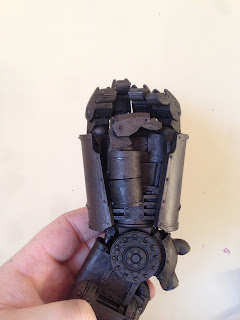 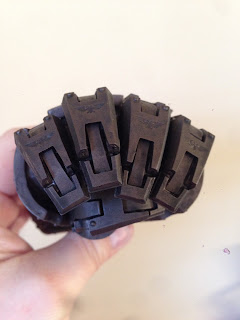 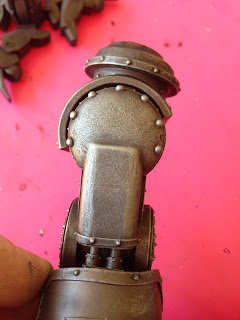 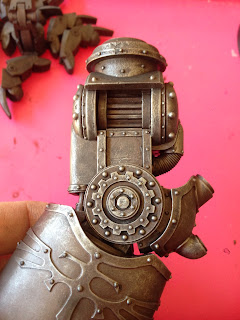 The greens were done with old Games Workshop paints, a foundation of Knarloc Green Foundation Paint and then a top coat of Goblin Green (needless to say I'm always on the hunt for pots of these - especially as Forge world have announced that titan support forces are coming soon). 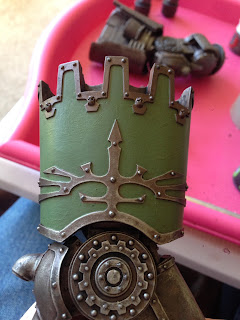 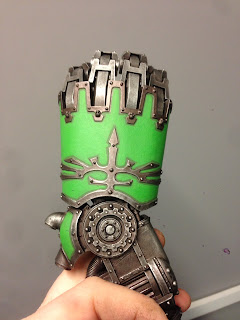 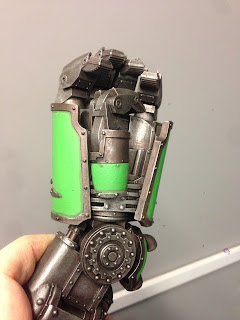 So the first fist is nearly there, with detailing and gold trim to do, the second fist I have decided will be half green and half blue and white check split down the detailing on the fist.

So here stands the second Reaver, still with some plates to finish. I really need to build some official weapon systems for these now, perhaps the two volcano cannons and some more D weaponry - it's also a great inroad to building Reaver no.3. 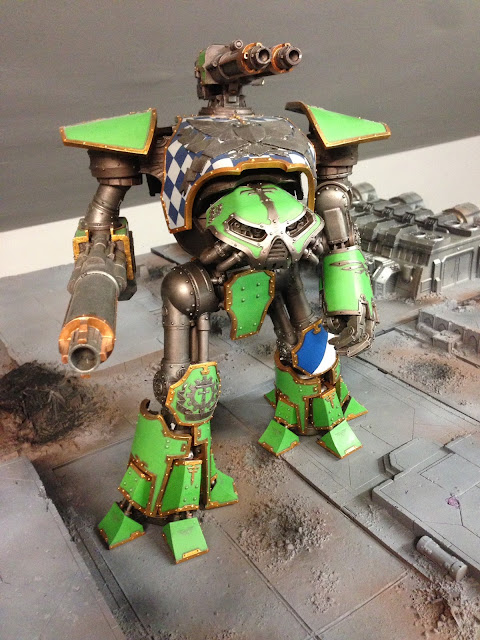 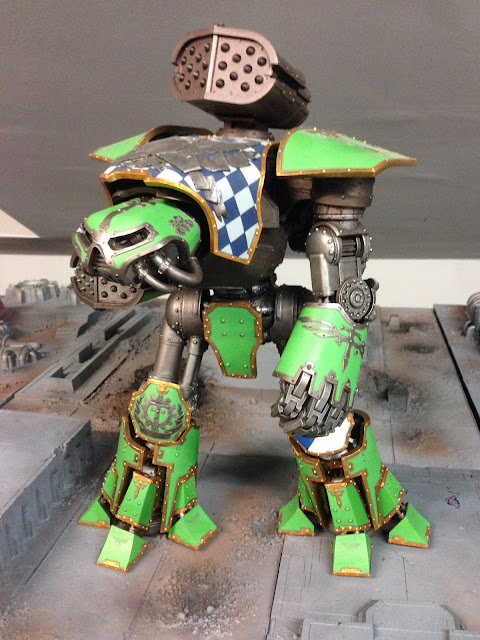 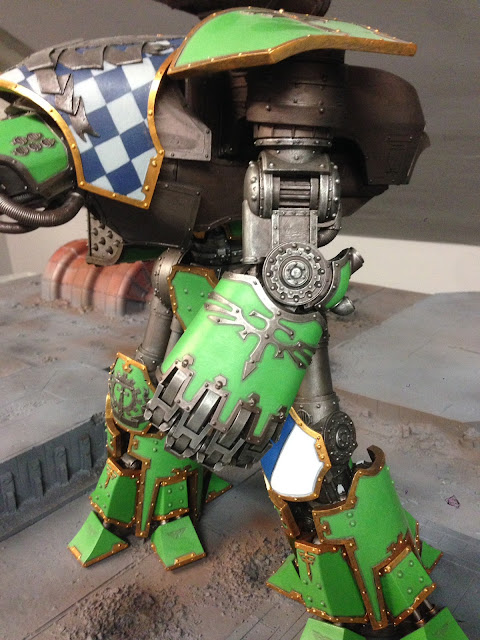 Next I want to finish the carapace detailing, as at the moment it only has the block colours applied. 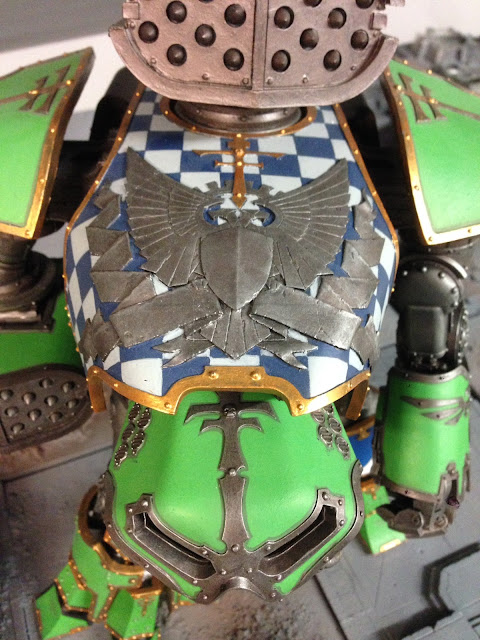 So stay tuned, and if you get a spare minute whilst passing any of the Forge World design studio team don't forget to whisper 'Legio Astraman transfers' into their ear.