So hopefully over the next month or so it should be an exciting month for the blog as it looks like we really are getting close to continuing our Purokar League campaign. I am personally very excited as the opening battle reports were my favourite part of the blog before I joined and it has been something I've been really looking forward to carrying on.

Now I must say Drake and Kaelo have put a massive amount of effort into this campaign over the years and some of the other bunnies have had a big hand in completing the armies that the Legions shall face. So please bare with us as we are all just hobbyists like yourselves with limited free time and resources so soon enough maybe even in the next few weeks there should hopefully be some games taking place!

In the mean time, I have decided to refocus my attentions on the Iron Tenth to get them battle ready. This will involve completing more transfers on my legionaries and working on my second contemptor dreadnought as you can see below... 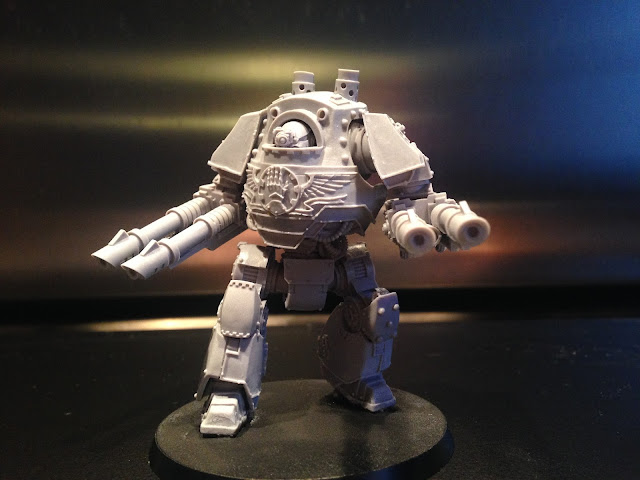 I don't often enjoy the building side of the hobby too much but I do love getting a nice pose. So the focus of this build was to get a different individual look for my second dreadnought so he would stand out and have some character. 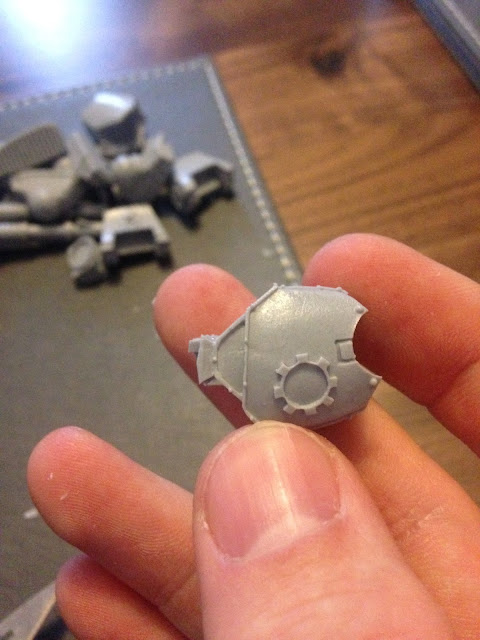 I'm not particularly good at making building guides so I've just added a few things I encountered during the build that I would like to share. This kit is far superior to my previous one that I probably bought over three years ago and I could not see a single issue with the mould so well done to Forgeworld for that! With this in mind, if you have not built a contemptor before just be careful when you clip and trim the model as areas such as the armour around the ankles and shoulders are still very delicate. 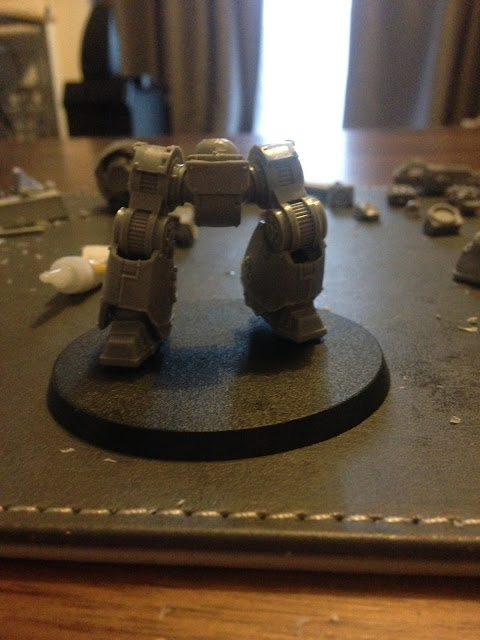 One of the crucial aspects of the contemptor I wanted to get right this time was the pose. So I tried to plan every stage buy piecing the model together to see how the pose should look. To add some movement to the model I had the contemptors right leg straighter but not completely straight and the left leg left behind the other and slightly bent forwards as if he is beginning to shift his weight across to his left hand side.

I also angled the shin armour slightly to the left where it connects to the foot to improve the dynamic look and used the left foot option which is on its toes. 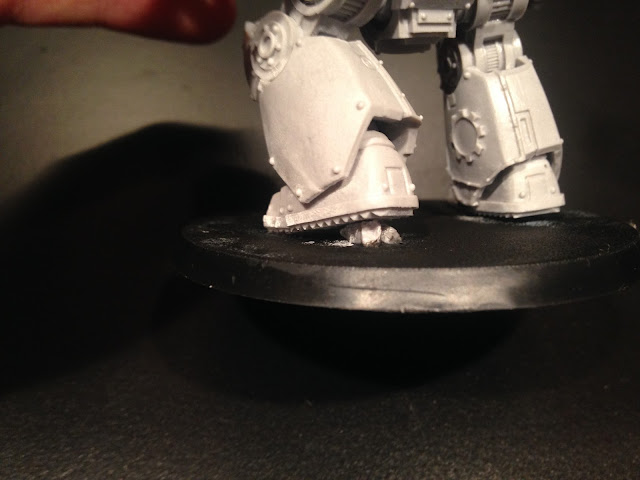 With the legs set as they are it did make gluing it to the base a bit more tricky as the model wanted to lean backwards. So I'm sure there are better ways of doing this but I decided to use some of the clippings I had from building the dreadnought as a wedge underneath the back foot to just balance the model on the base and create a larger surface for the glue to take hold. I will then make sure these are blended in to the base at a later date.

Apologies for the poor photos, time was limited this week, so they were done in the moment! 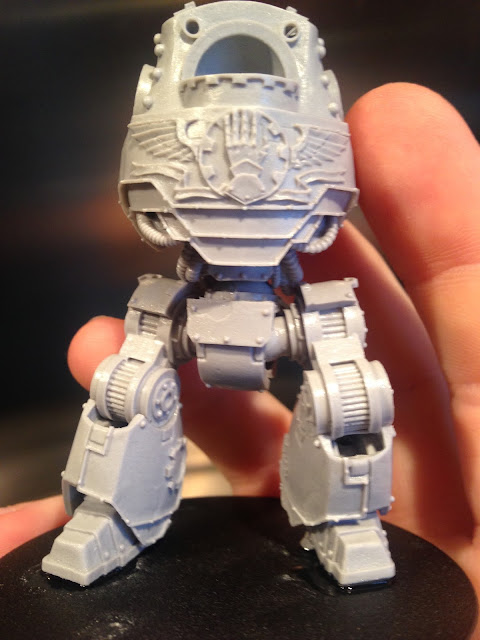 The one problem I experienced by having a more dynamic pose with the knees slightly bent is that the tops of the hips do come together more than they normally would do. This did make gluing the torso section on to the legs difficult as due to the cabling around its flanks the torso does not sit properly onto the dome where it would normally sit. Therefore to counter this I had to turn the torso to the right hand side so I had enough contact between the surfaces for the glue to take hold. 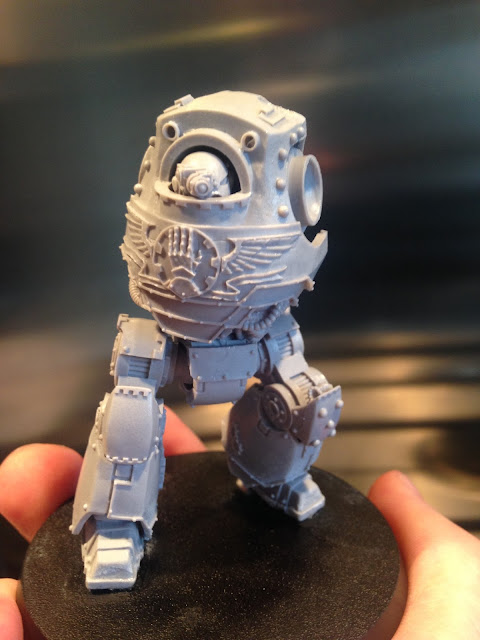 This actually turned out perfectly for me as with the torso turned it made for an even more dynamic pose, so that I could have the left arm stretched out in front and the right arm being held by his side. 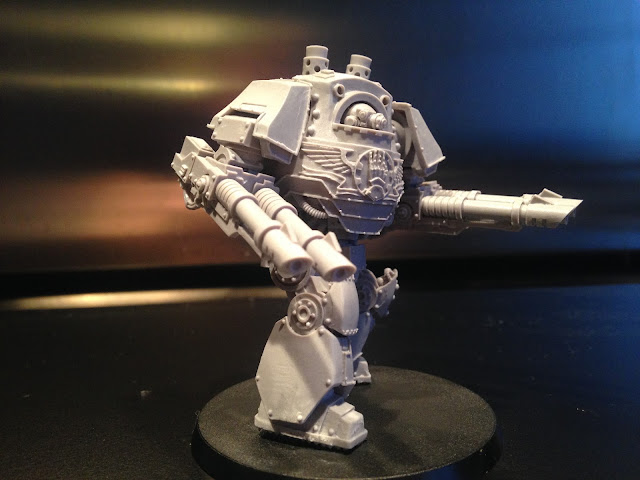 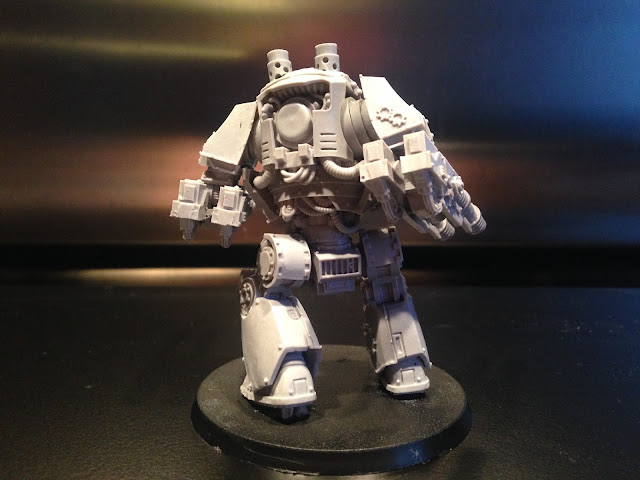 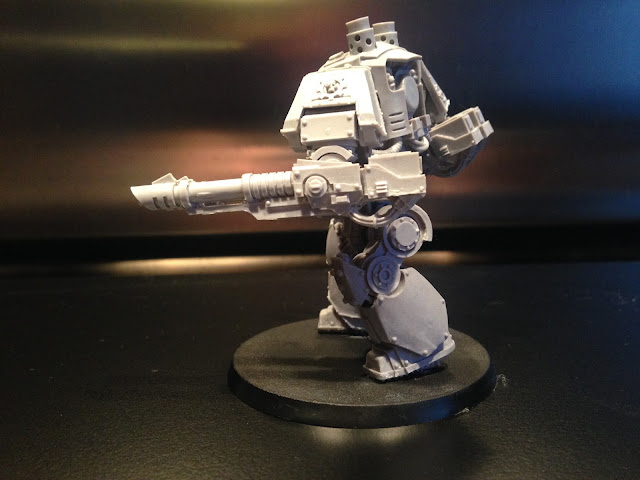 Just quickly as a short product review, if you haven't already used it, the new Citadel Super Glue is far superior than its previous incarnation. It now comes in five small tubes so they can be opened one at a time and it just saves you having to try and unclog the old super glue bottle every time you come back to using it. It also has much faster bonding time than the previous product, so building this contemptor was a much nicer and quicker experience. 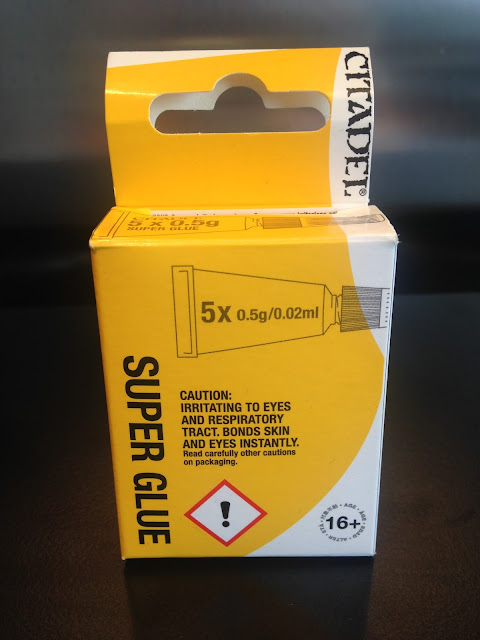 So with building not being my forte, I am now going to take on some of your advice from Kaelo's post earlier on in the week and do a step by step painting guide for this contemptor dreadnought. It should hopefully be a bit clearer and i'll try and get some nice pictures of each stage as it happens!

Can't wait for some campaign action now so stay tuned for the build up and I hope all your projects are going well!