Today FW released a bunch of weapons for your Marines - aswell as a little bit of lore for the different patterns:


In the aftermath of the Age of Darkness and The Scouring that followed, worlds that had been lost vanished from the memories of Mankind. Proud Forge Worlds, once lauded in triumphant song and tales of awe, left nothing but their names, etched onto the ancient metalwork of weapons they once fabricated.

Robust firearms that fire bursts of high-velocity, caseless shot, autocannon are excellent all-round weapons. Powerful enough to take on heavy infantry and lightly armoured vehicles, their long range and high rate of fire has lead to their extensive use by the Space Marines Legions during the Great Crusade. 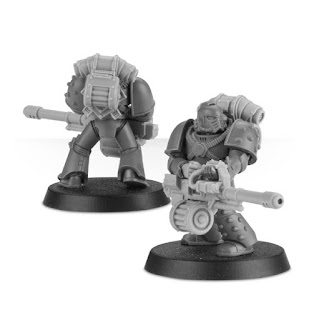 
Primarily known for its plasma reactor and magnetic field technologies; Ryza is a principal Forge World of the Imperium, consistently producing weapons of notable quality and reliability that have been put into service by the Legiones Astartes since the days of the Great Crusade.

Lascannon are powerful, reliable heavy weapons which can deliver extreme damage over a huge distance. Firing bursts of explosive energy, the Lascannon is the weapon of choice for long range tank-hunting units. 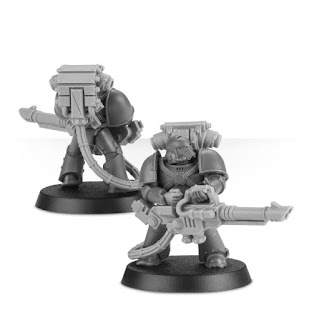 
Dating back to the Dark Age of Technology or before, many types of weapon are so omnipresent they have their origins hidden by time. Weapons designated Proteus pattern share this unknown origin, in use since long before the coming of the Emperor and the Age of the Imperium.

Ubiquitous throughout the armed forces in the Emperor’s service, the Missile Launcher is one of the standard heavy weapons of the Space Marine Legions. With its variety of munitions, the missile launcher is a versatile and lethal weapon. 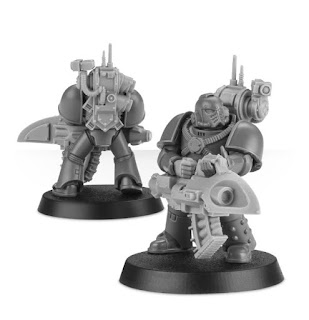 The forebear of the later assault cannon, the Rotor Cannon was a multi barrelled stubber that could sustain an extraordinary rate of fire. Whilst lacking the power of bolt shells, the hail of fire produced by the rotor cannon could make short work of enemy hordes. Simpler to produce than most heavy weaponry, Rotor Cannon found use in many Legion Tactical Support squads. 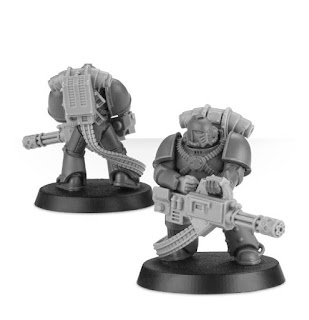 
In the latter days of the great crusade, the Imperium’s manufacturing capacity was vast, on a scale unknown after the fall into the Age of Darkness. The web of Forge Worlds under the Mechanicum’s aegis extended from Mars to the far reaches of known space, each producing arms for the armies of the Imperium, their very best going to the Space Marine Legions. This munificence of resource led to a proliferation of weapon patterns, each unique but harking back to a standard template. Those produced on Atar-Merdian were comonly known as Mediant pattern.

Lethal anti-armour weapons, multi-meltas scale up the destructive power of melta weapons, allowing the Legionnaires wielding them to vaporise vehicles and infantry alike. 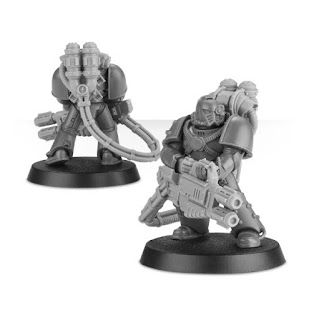 
At the height of their technological might, the forges of Mars produced weapons to a standard seldom matched in the Galaxy. These patterns became a benchmark by which others would be judged. In the ages since, much technology has become homogenised through the loss of knowledge and whole Forge Worlds, but Mars pattern weapons are still prized in Space Marine armouries as exemplars of their type.

The largest man-portable example of standard bolt weaponry, the heavy bolter is mainly used in anti-infantry and fire support roles. Its large calibre and high rate of fire make it an excellent choice of weapon in target rich environments. In the latter years of the Great Crusade, Legiones Astartes Heavy Support squads carrying ten heavy bolters into battle on missions of compliance were a common sight. 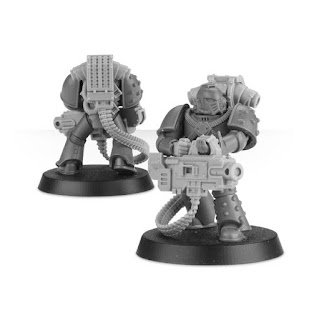 
Firing pulses of searing energy, plasma weapons are extremely effective against heavy infantry and light vehicles. With their long range and blast radius, Plasma Cannon are even more deadly than other designs of plasma weapon. To create this destructive force plasma weapons generate extremely high temperatures, making them volatile and prone to overheating in an explosive fashion. 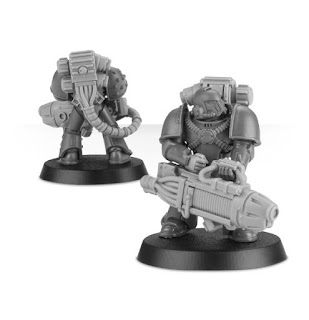 
The loss of Forge Worlds during The Horus Heresy sped the decline of Volkite weapons in the Imperium. The technology, difficult to manufacture even by the most able of the Mechnicum’s forges, was rendered scarce in the aftermath of The Age of Darkness. Telerac pattern weapons are far more ancient and ill-omened even those designated 'Proteus', the name implying dark associations with the technological horrors of the deep reaches of the Age of Strife. The shortage of reliable supplies of Volkite weaponry saw many Telerac pattern weapons restored to service in the name of the Emperor, and carefully mainteded in the Space Marine armouries.

The heaviest of the portable Legiones Astartes ‘Volkite’ weapons, the Volkite Culverin is a thermal ray weapon of ancient provenance. Its beam has a devastating effect on organic matter, explosively burning flesh into ash and jetting fire. 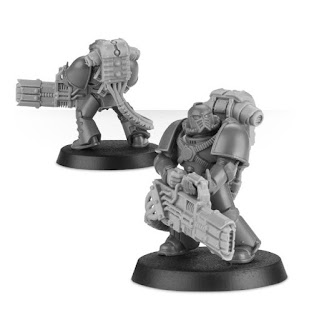 
Much was lost in the Age of Darkness and the following millennia, much that could never be recovered. Whole worlds vanished from the knowledge of Mankind. Among them, Forge Worlds whose names only linger as patterns of weapon, venerated in the armouries of the Space Marines and still brought to bear against the enemies of humanity.

Heavy Flamers are often deployed by Legiones Astartes units either as area denial weapons or to force enemy infantry from fortified positions. A variety of different chemicals have been used as fuel for these fearsome weapons, all of them designed to ignite on contact with the atmosphere. 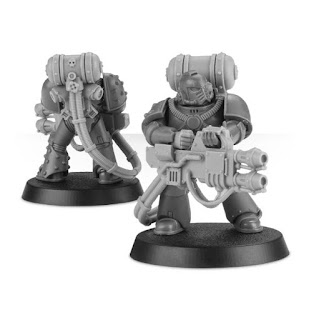 All of these contain 5 new heavy weapons and a backpack - pretty awesome! We also got two other new sets, and a new dreadnought weapon!


Little changed over millennia, Space Marine shotguns – also known as Legiones Astartes shotguns - are short ranged assault weapons. Whilst more powerful than those issued to other Imperial armed forces, Space Marine Shotguns are simple weapons that are relatively easy to produce and maintain.

The Deliverance pattern shotgun takes its name from the homeworld of the Raven Guard Legion, whose Strike Squads favour its design. 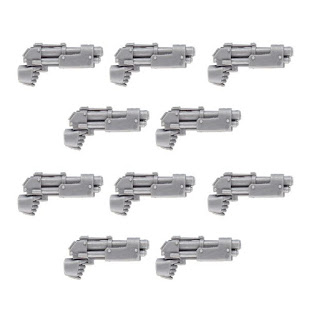 
This resin upgrade set features a selection of weapons of patterns dating back to the Great Crusade. The set includes two Missile Launchers complete with arms, two Flamers, and two Meltaguns. These weapons are compatible with both resin and plastic Space Marines. 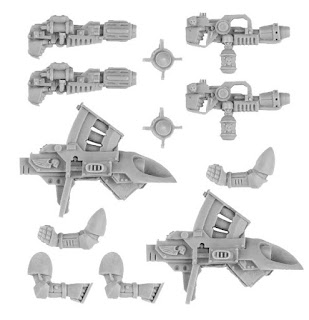 
The ranged weapons of the Leviathan pattern Siege Dreadnought were designed to be used at closer range than those carried by most classes of dreadnought. The Leviathan Cyclonic Melta Lance is a rapid cycling melta weapon, firing faster, with more powerful shots than a standard multi-melta, though at the reduced range common to Leviathan pattern weaponry. 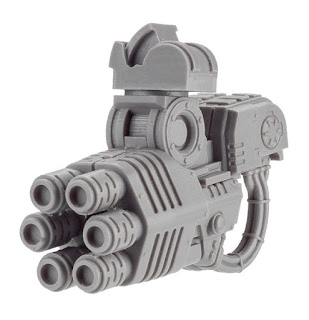 What do you think about today's releases? Are you excited for some upgrade kits, or do you want to see some of the bigger stuff? What do you expect next week? Write us in the comments below!