Today we have a look at Dungeon Bowl. It is a game of Blood Bowl that colleges of Wizards use to settle their differences and quarrels. The game unlike the standard Blood Bowl match, takes place in a subterranean Dungeon. If you have played Blood Bowl before, you will find it very straightforward and easy to transition over to this game as it utilises pretty much all core mechanics of its big brother, with just subtle differences.

If you are new to Blood Bowl, the mechanics will take a bit of time to get used to, so your first few games will be quite slow. I would recommend starting on Blood Bowl or Blood Bowl sevens first, but there is no harm starting here. 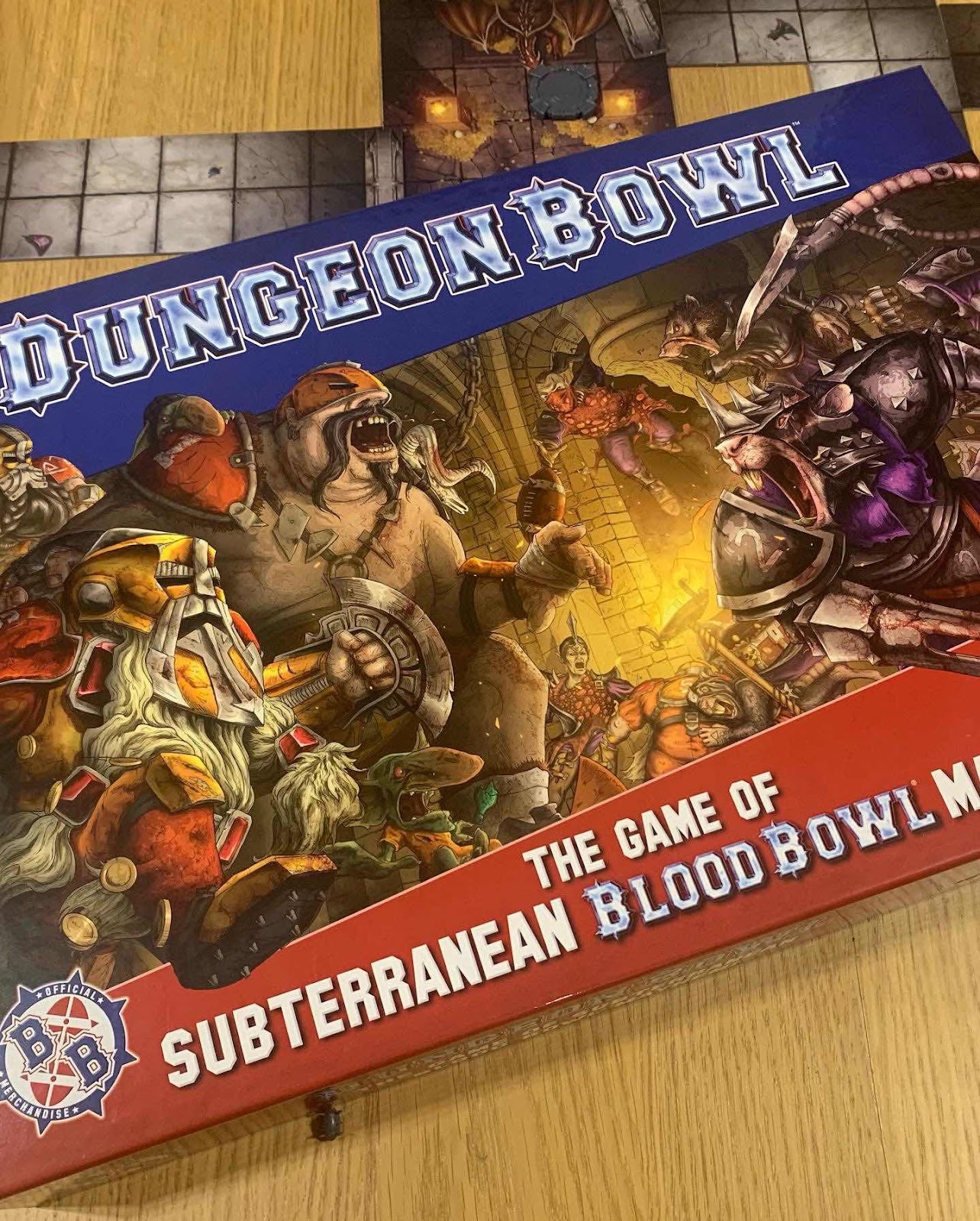 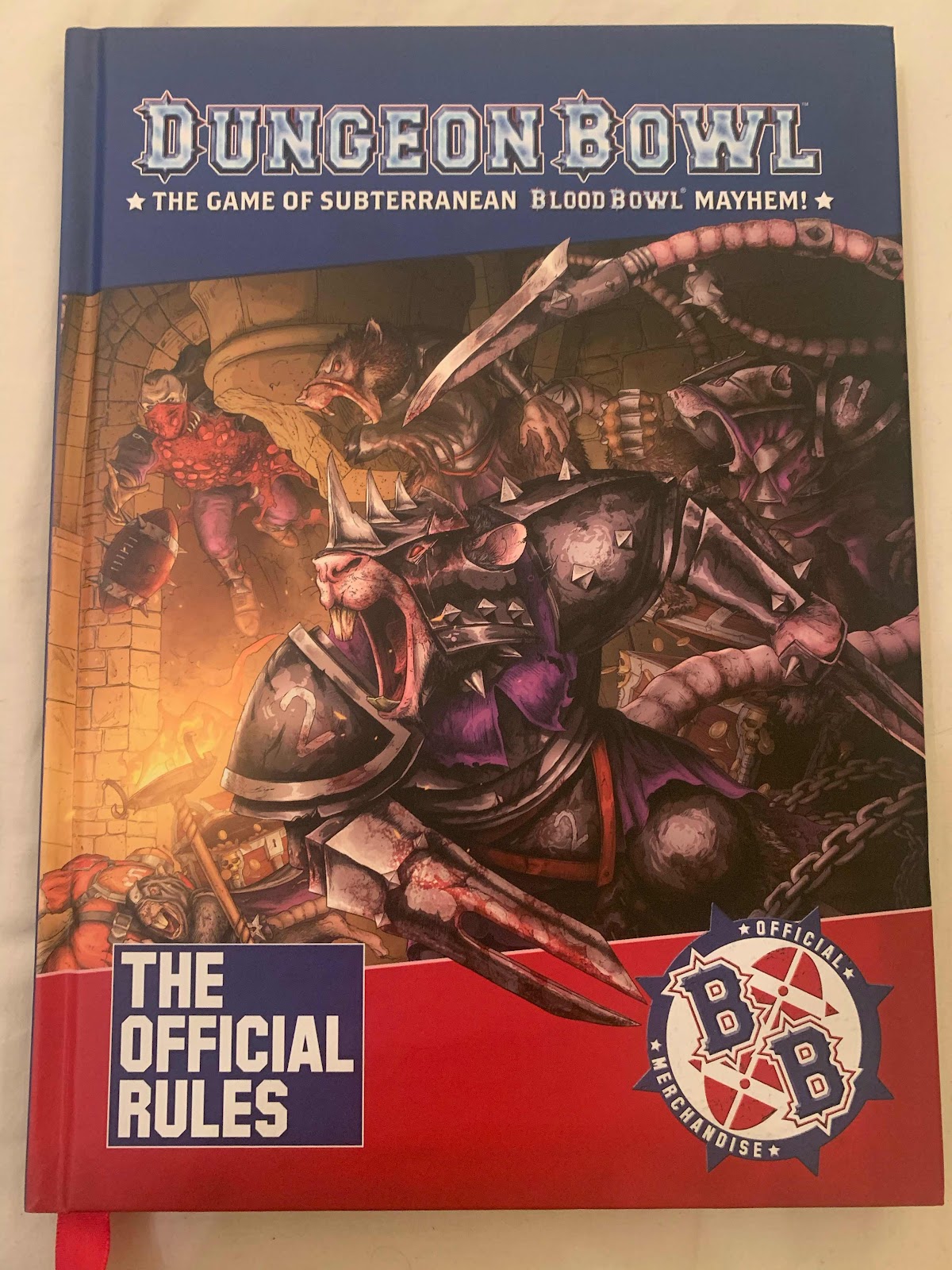 We have been playing Blood Bowl for 3 editions now, but more recreationally apart from the odd league here and there.

We have had 2 games of Dungeon Bowl so far, one with me vs Lauren and another with me vs my 7 year old son. Both games have been great fun and really is a game of chance. I feel this is more of a recreational/stand alone game than Blood Bowl is. The mechanics with portals, exploding chests etc is very very random so serious tournament gamers who perfect their plays, min max their teams etc, might find the chaotic nature a bit of a shock and hard to come at tactically, so to me it is more of a beer and Pizza game. And once again. . . it is very fun. 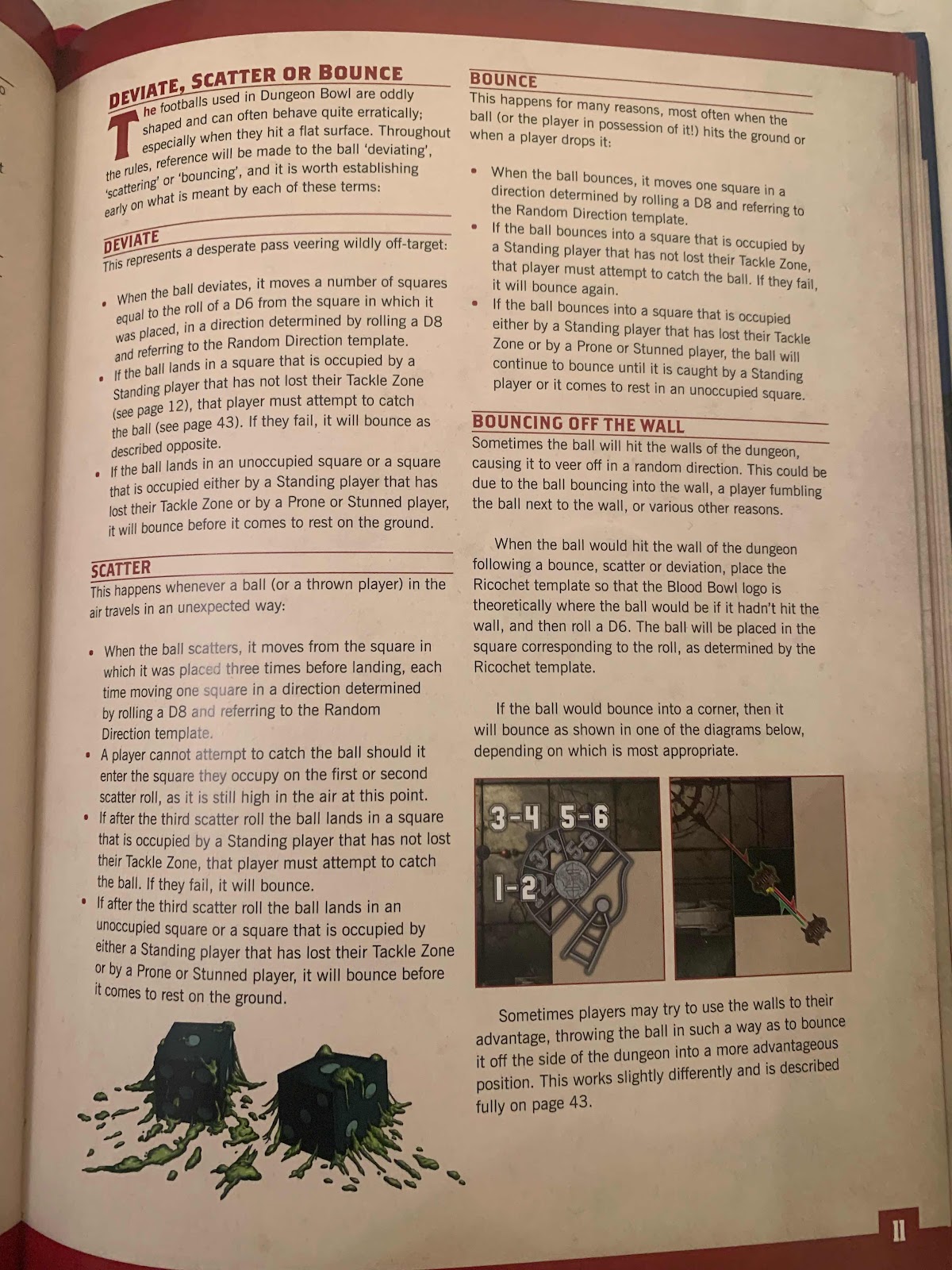 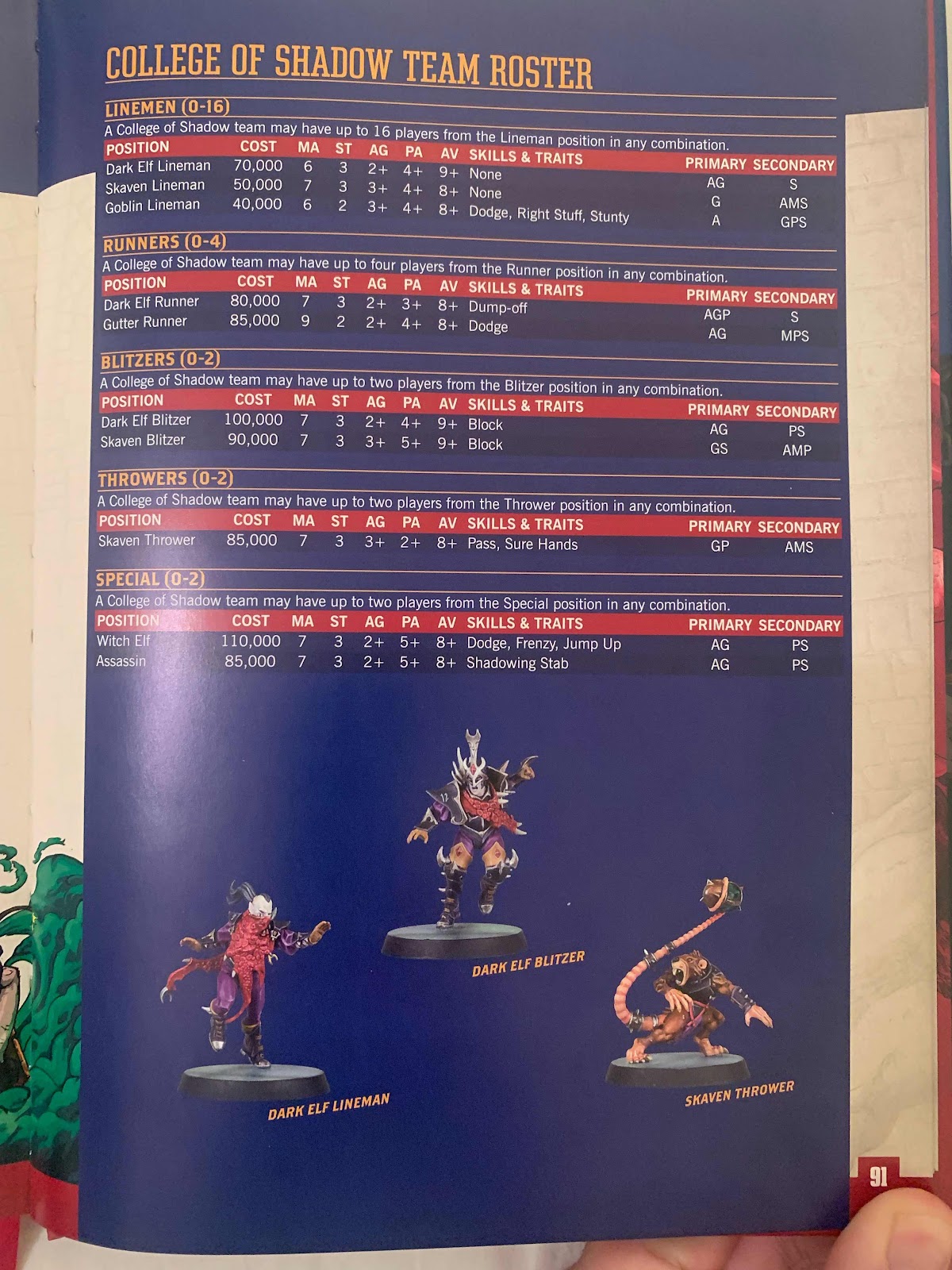 Players take it in turns placing corridors, rooms and doorways until the dungeon is complete.

Players also take it in turns to place the chests and portals.

Then the end zones are added in a way that they are pretty much as far as possible from each other. It is done in such a way that you can’t weigh it in your favour as you don’t know where you will be setting up.

After this each player puts 6 of their team in their end zone and the rest in the portal room on their dugout. There is a roll off/flip to see who goes first. 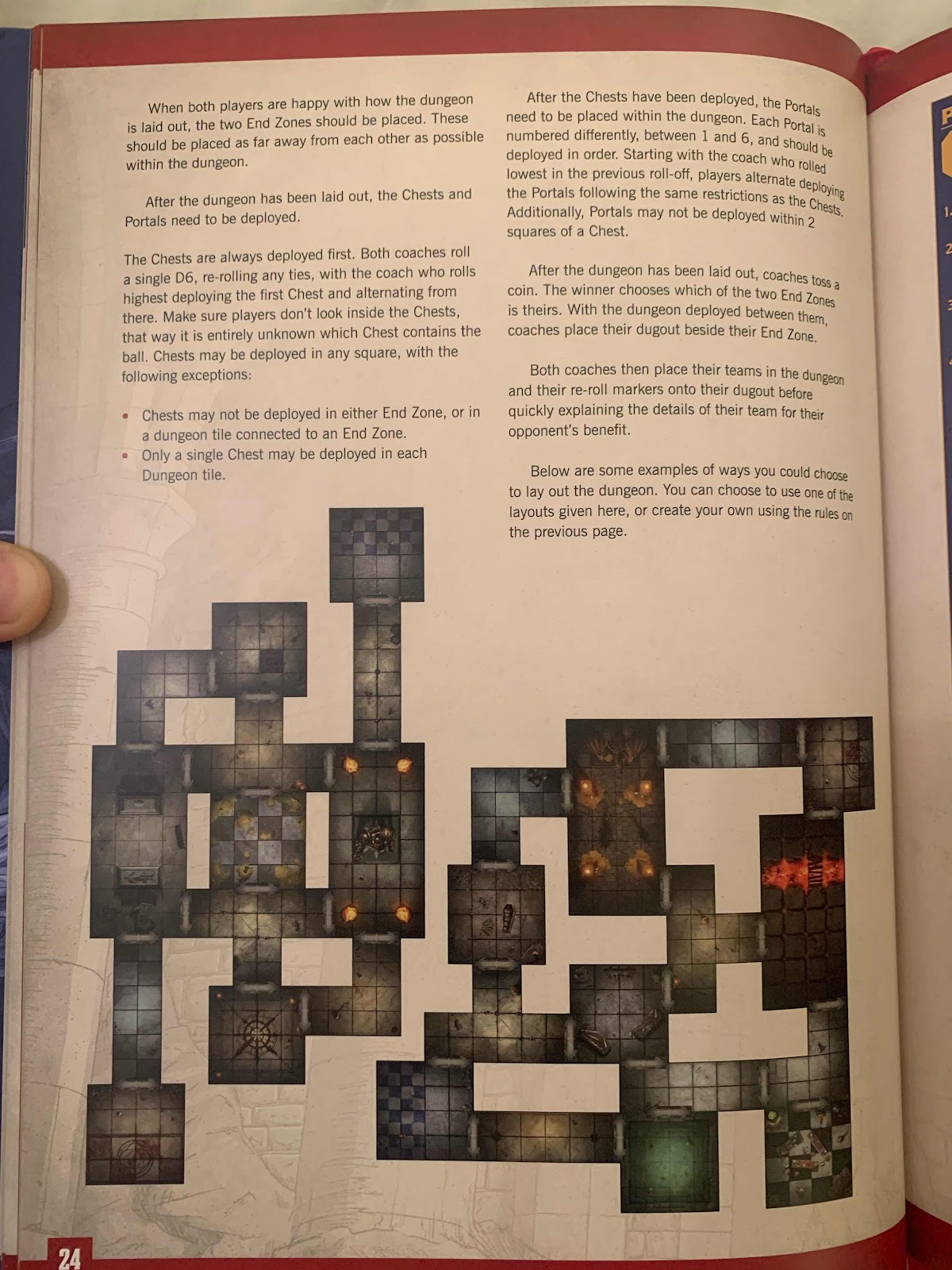 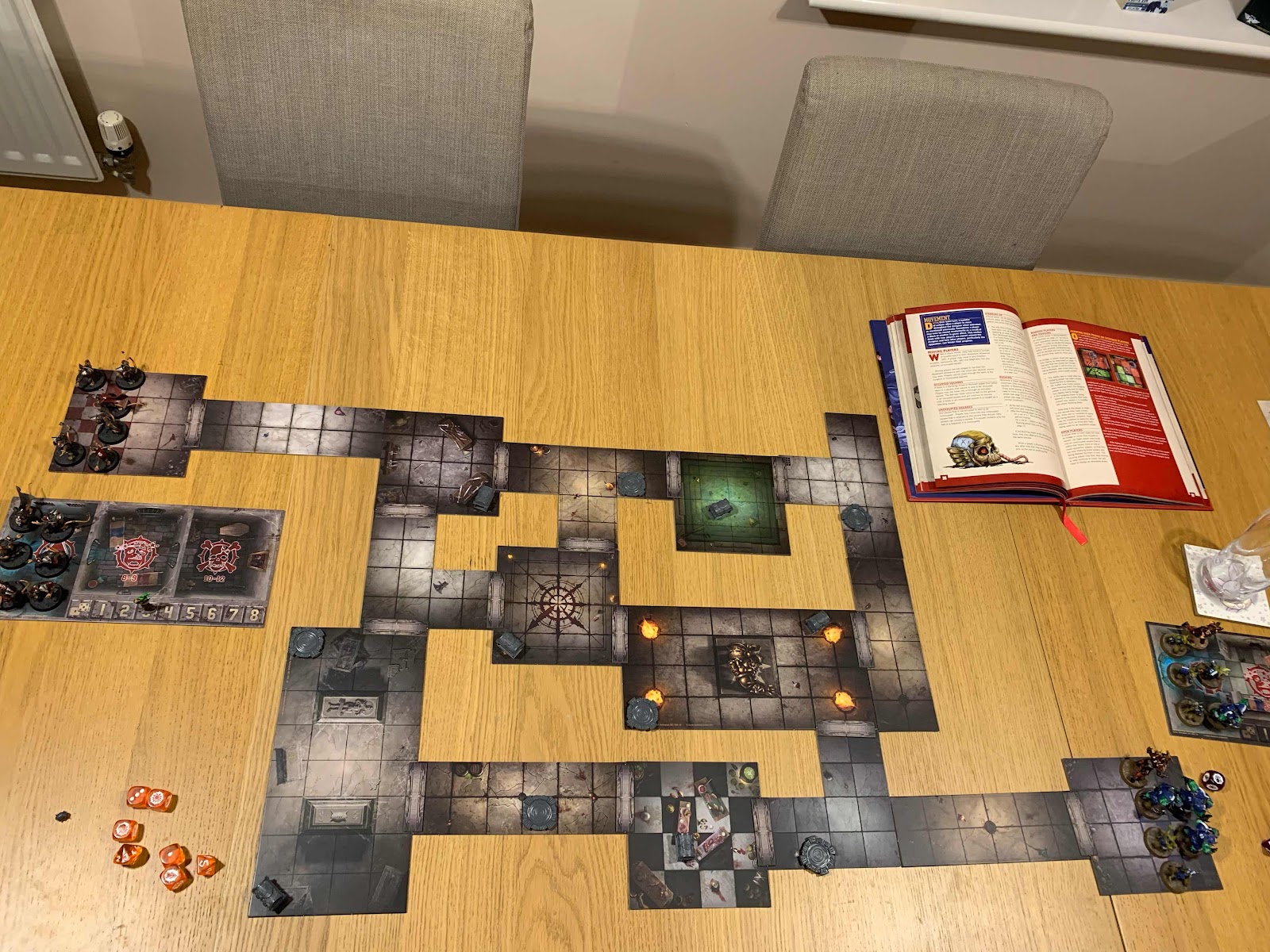 Run the gauntlet of the dungeon, find the ball in a chest and get it to the other teams end zone. You can use portals and left over exploding chests to help you (more on later).

Also every room has a little perk or bonus to make the game more fun. For instance in the pantry tile you can choose to not do anything with your activated player, instead you can roll a D6, on a result of 5-6 you make an enemy go down nearby and take an armour/injury roll as you dash food at them. 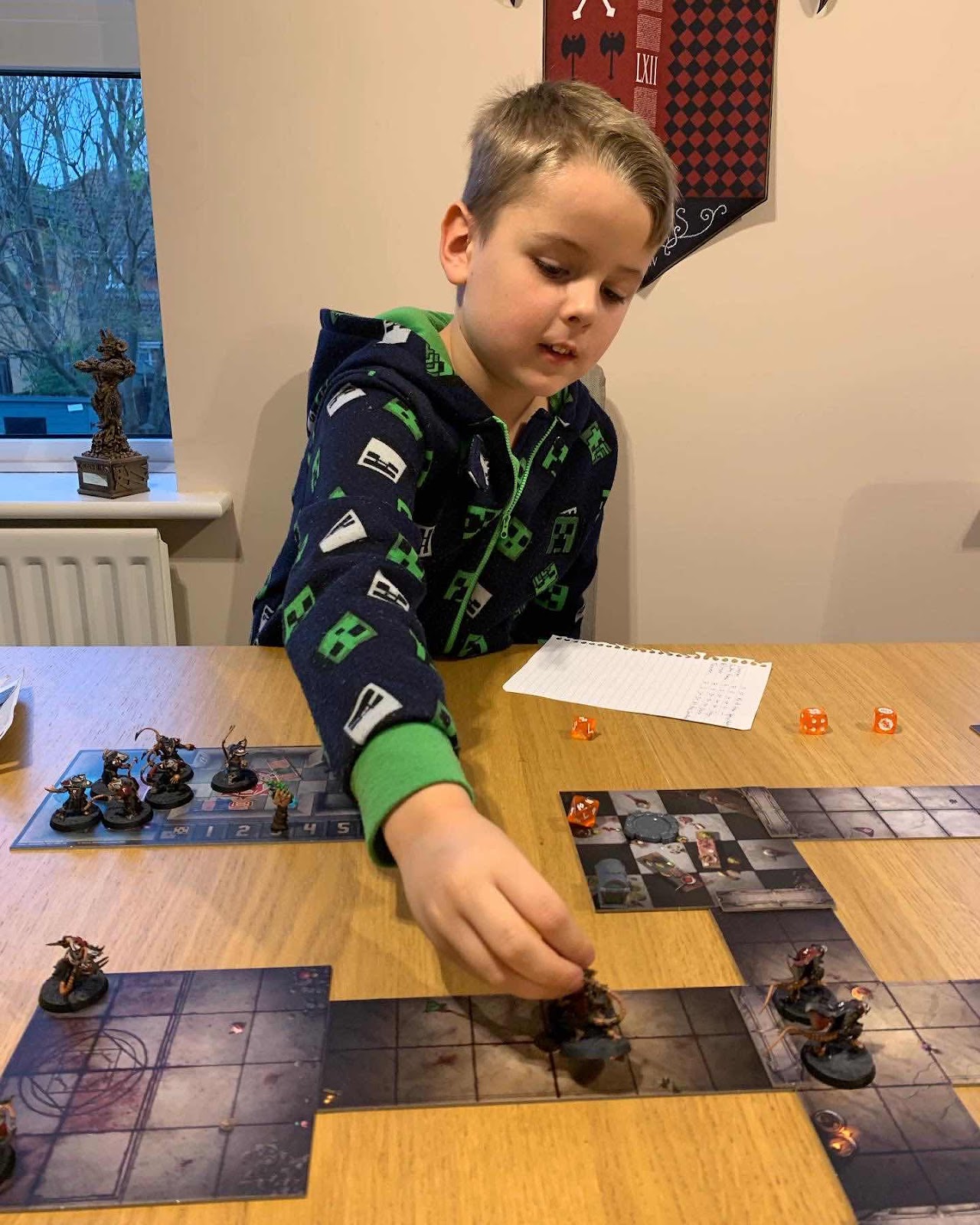 Chests are simple. 5 have bombs in them and 1 the ball. When a player moves adjacent to it they can open the chest. If it is a bomb, every model adjacent to it gets knocked over and takes an armour/injury roll. This is also why left over chests are kept on the dungeon so you can utilise them to wreak havoc on opponents if you are lucky. 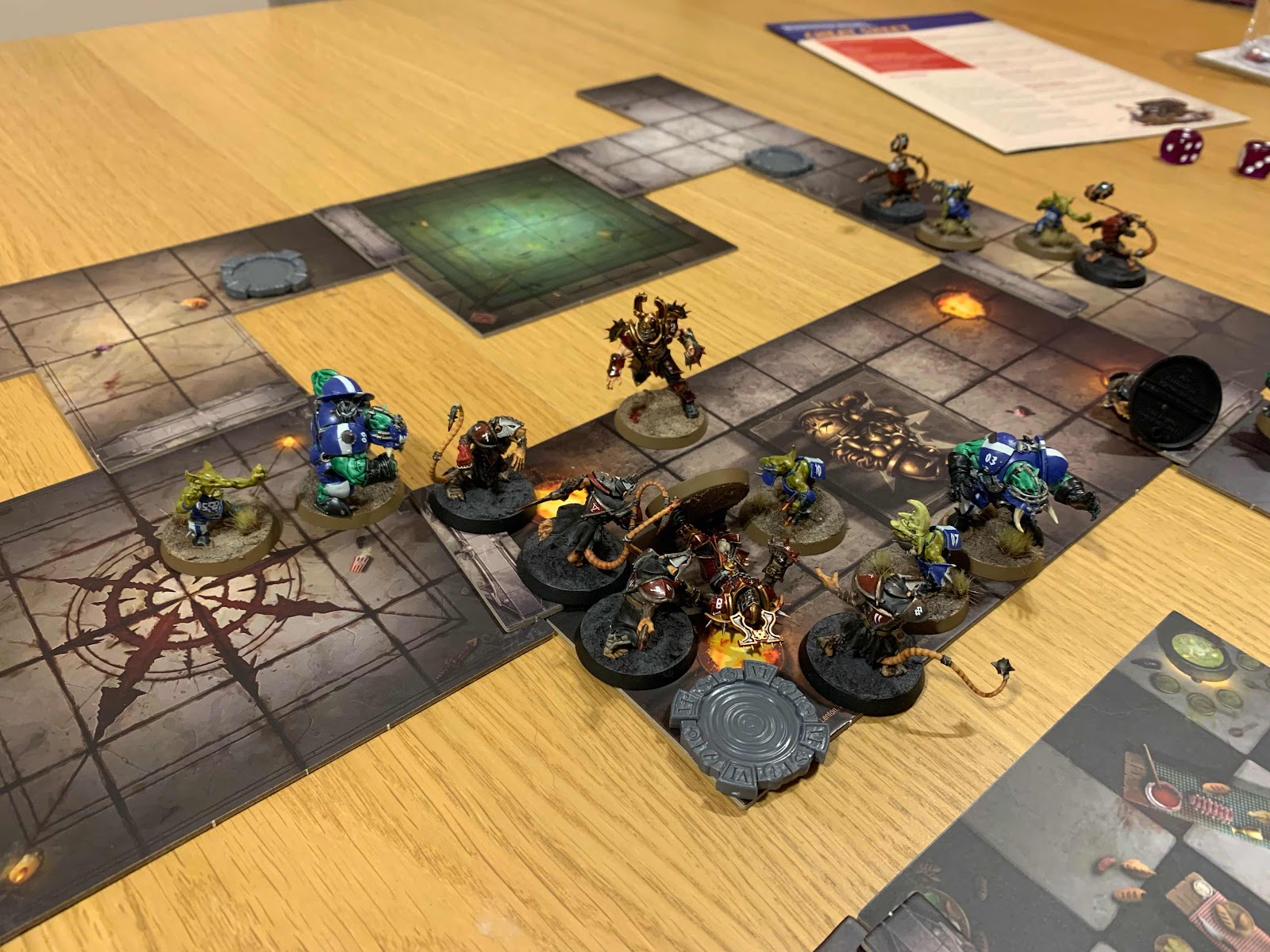 When you are knocked over it is a turn over so you need to do this at the right time.

So, this is also my only criticism with the game. If I was a canny person and painted these chests up, they would need to look exactly the same on the bottom half, or I would eventually be able to notice which one the ball is in over time. The lids are separate so that means they can be swapped round so it may not be immediately obvious, but a highlight here, a tide line from a wash there or a slight flaw and boom I can cheat. . . . I thought to myself then: I could stick the ball randomly in a chest to avoid this and ignore the bombs/ball already in there. Then I noticed it rattles slightly. So I tried blue tac and then I realised one chest was heavier than the others lol. So I personally feel it would have been better if in the chest was just a pile of coins with a separate bomb or ball which could be placed randomly within each (you can place in and close up then shuffle them round with your eyes closed lol). That way they could rattle until your heart is content.

For now I have played with unpainted chests so not an issue. 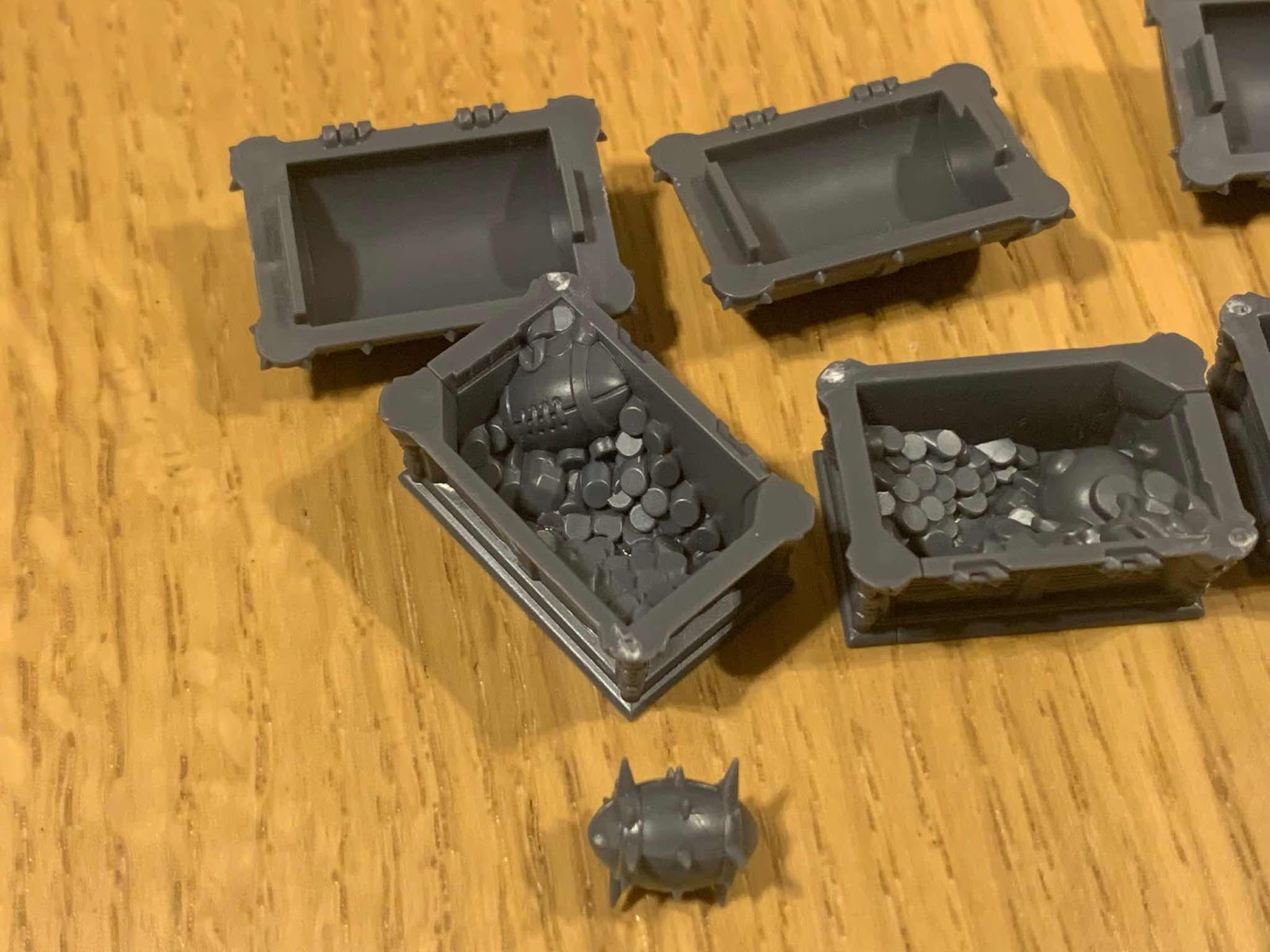 Turn 2 onwards you can bring someone in from  the dugout through your portal (as the rest of your team is galavanting round). Roll a D6 and your player pops out at the corresponding portal on the pitch. That is then the end of their movement as the translocation confuddles them.

If someone is already on that spot they teleport as part of a chain reaction to another random portal. Beware though, as if they teleport to the same portal they are already standing on, it is a magic mishap and they are lost to the dungeon (Wizard finds them after the game and all is well).

This also goes for people jumping down portals, you have a 1 in 6 chance of rolling the same number and it being another mishap.

I swear blind this is the new go for it lol. Your lovely gutter runner clings the ball and jumps in and boom. . . Gone. Ball is more important so bounces out of a random portal lol. 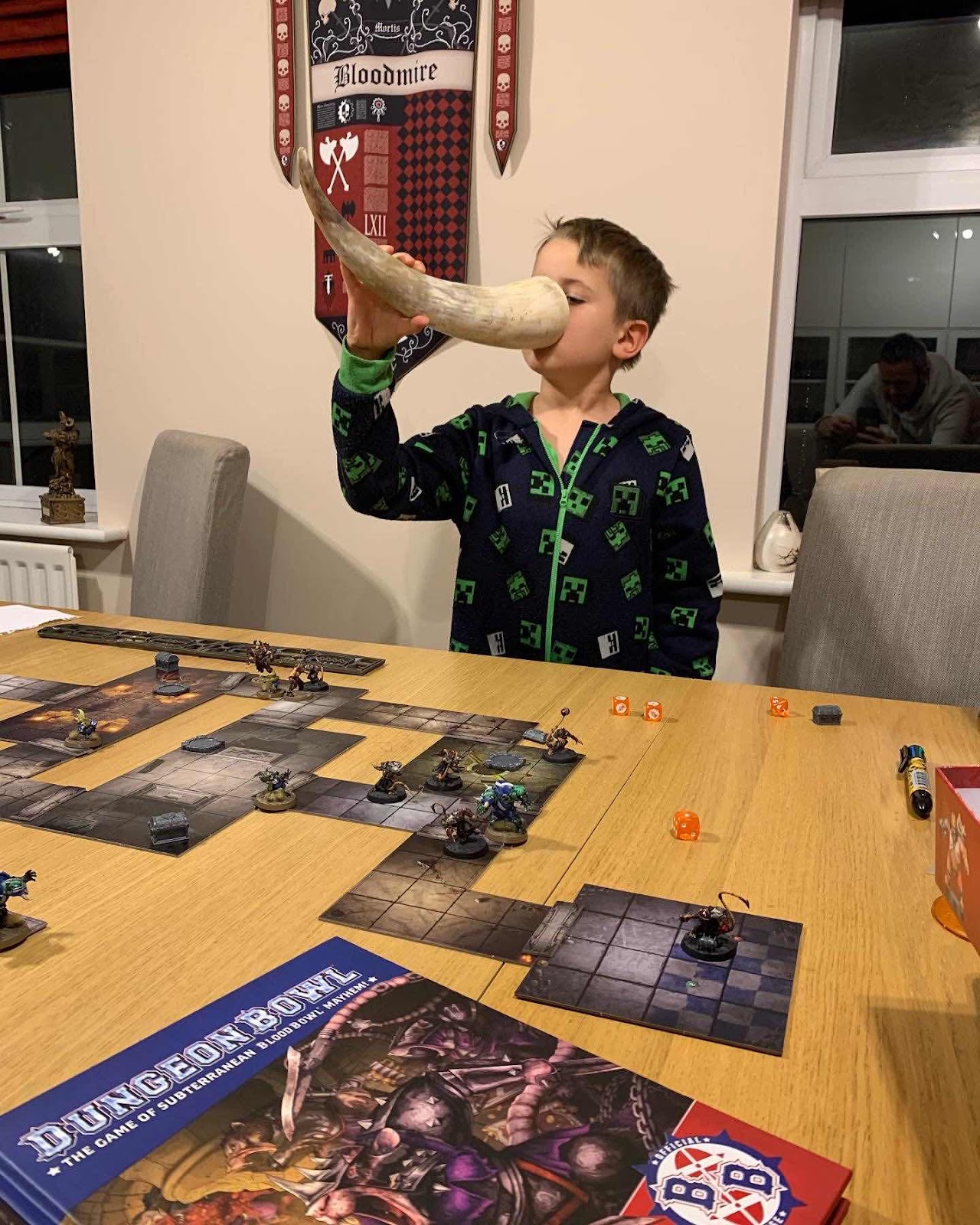 You can return knocked out players to the portal line, in place of sending someone into the dungeon through a portal that turn. 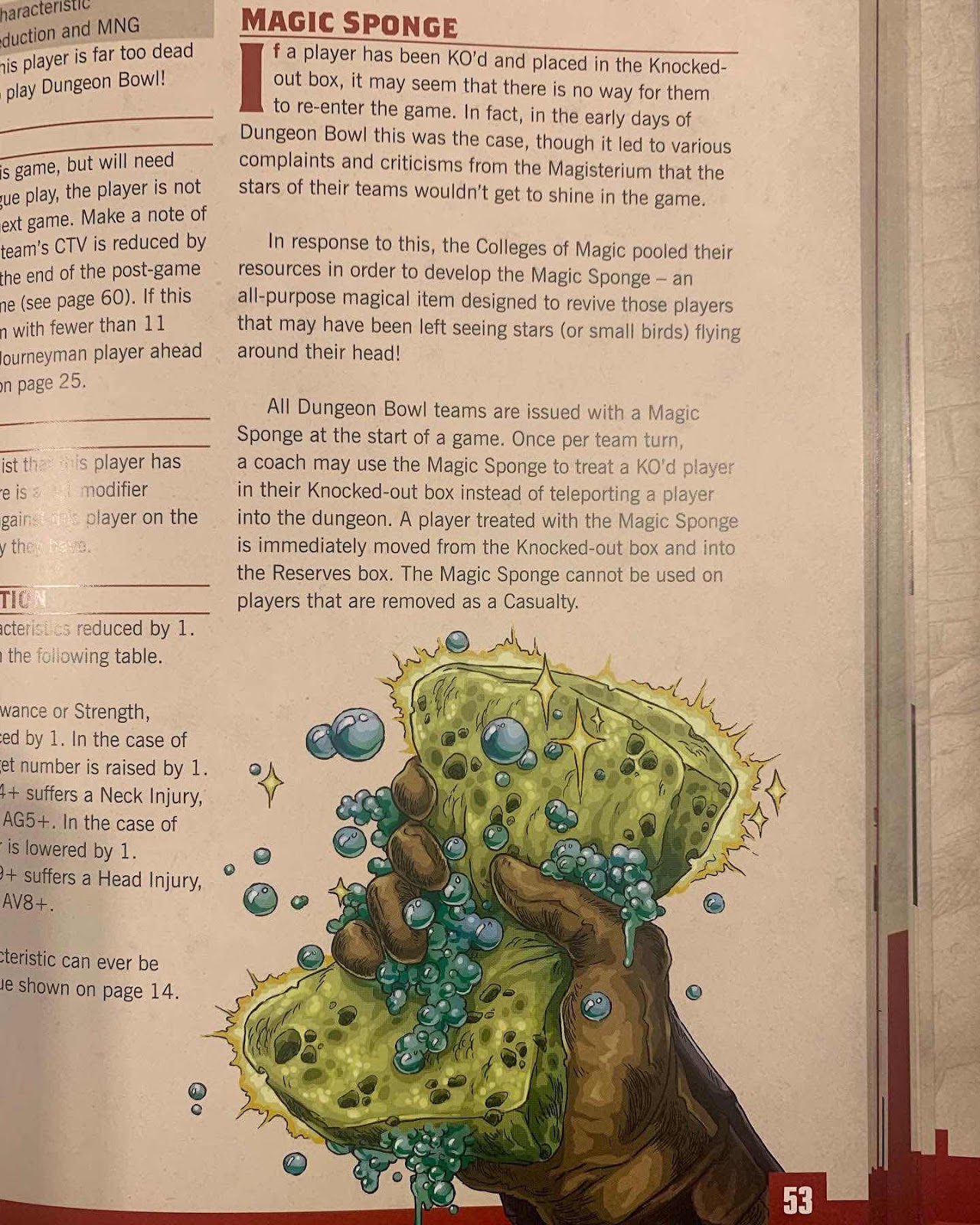 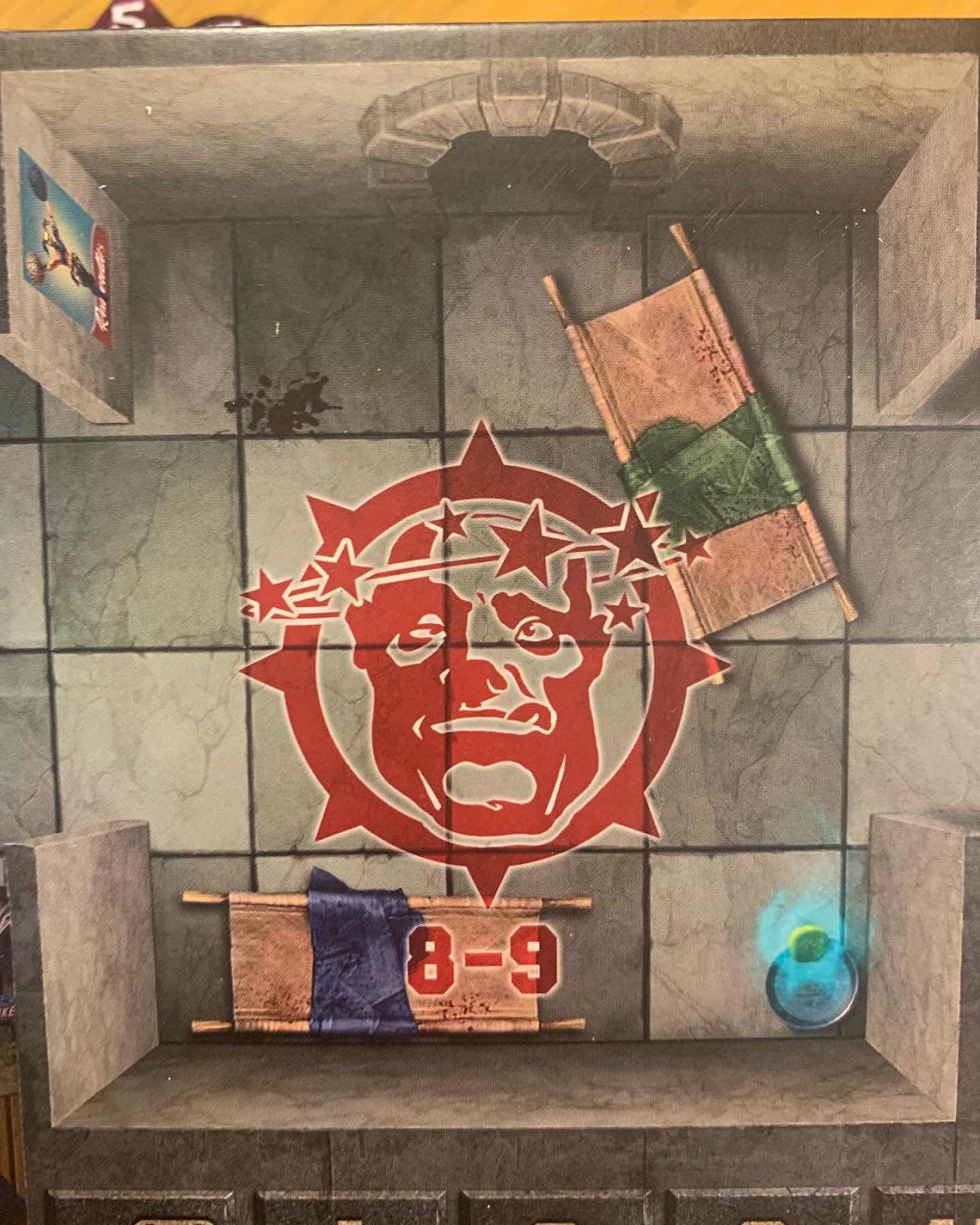 I have played twice so far. First was against Lauren and it was great fun, even whilst learning. I managed to get 9 of my players into the out of action section through magic mishaps and injuries, to her 3. It really is a game of chance. She eventually won as it was an absolute slog getting past some of the black orcs and Bloodseekers with my Skaven due to their S4 and the way the Dungeon can bottleneck you. Try to spend some time taking out the weaker S2 goblins looking for the ball in this instance helps I found.

Second game was against my son Nate. Took around an hour and a half and we played the game properly (which was good considering he is 7). 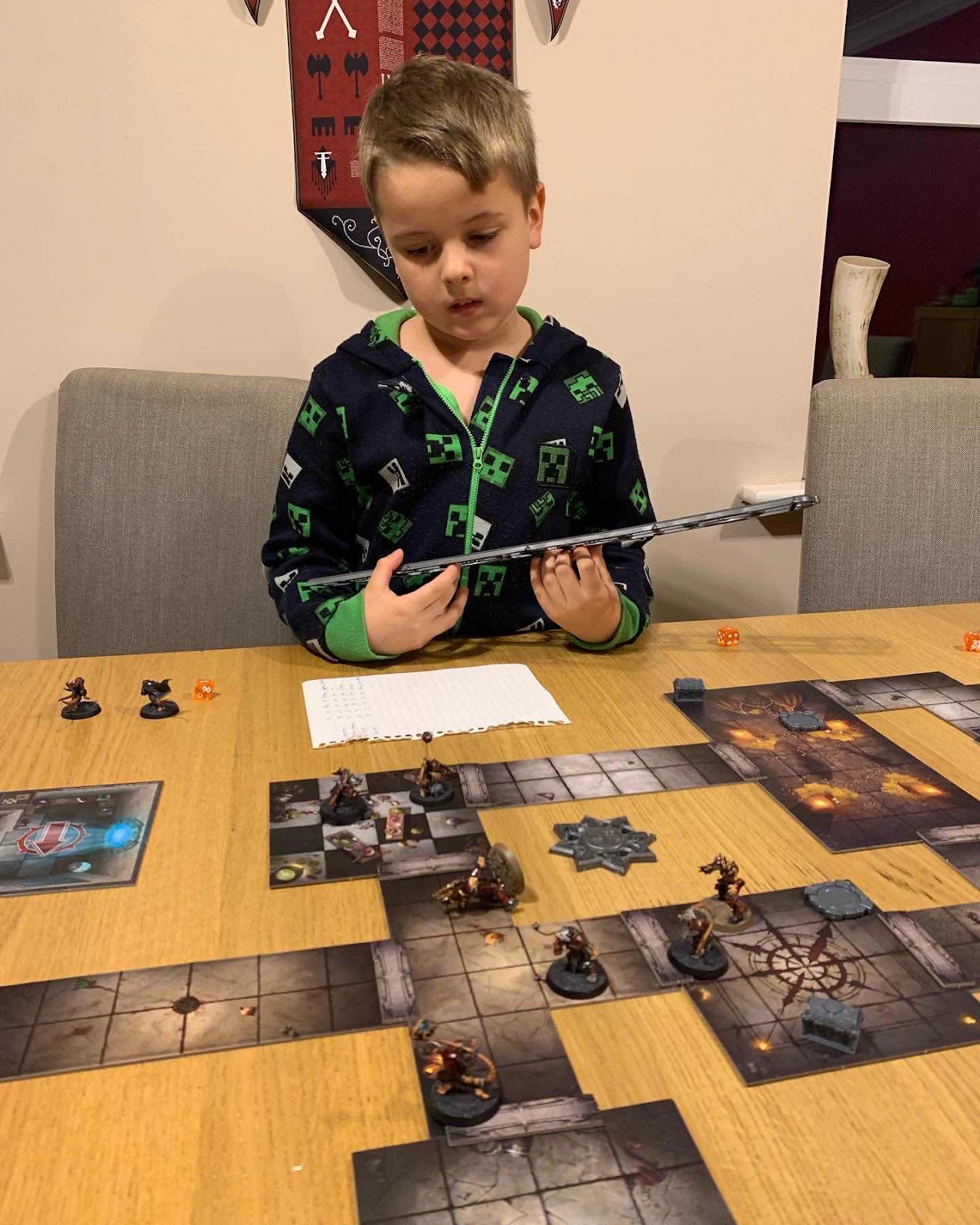 All in all it is a good game. Those who love Blood Bowl would enjoy it as it is a bit more of the same but a bit less intense (especially if you have a good sense of humour) and you don’t tend to flip tables when it doesn’t go your way.

Gamers who often play leagues of Blood Bowl may enjoy a Dungeon Bowl league as a new challenge after an intense league (as a palette cleanser if you will), where it is almost certain that the usual regular league Victor will not be the winner in DB.

So yes great fun pick up and play game for our club. Thanks to Games Workshop again for the review copy.