Hopefully you’re all enjoying your new toys and getting them built into glorious legions!

Today I’m taking a look through the Salamander’s updates in 2.0. They are the legion that I am putting together for the new edition, the first unit of which can be seen in yesterday’s post, the mighty new Kratos. I settled on them because the model range is cool and Vulcan is the nicest of men! The Salamander’s are one of the legions that have lost quite a few units in the no model no rules of this edition. It has left them feeling a little bare bones compared to some of the others, like the SoH, Fists or Word Bearers. 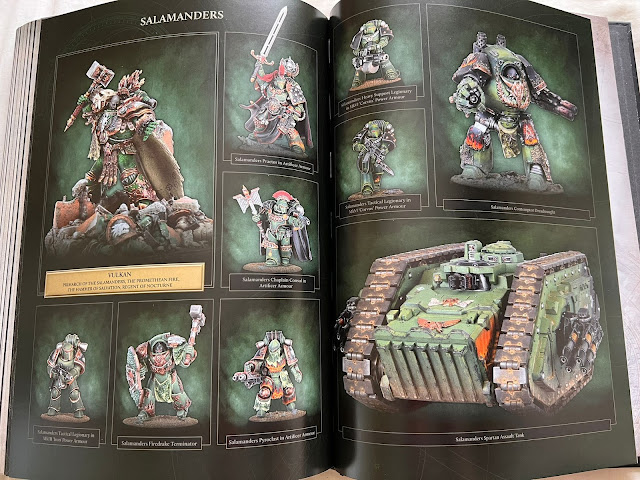 When you roll to wound against a model with this rule from a Flame, Melta, Plasma or Volkite weapon or effect, you reduce the result of that by -1. Though this doesn’t change the strength of the weapon which is important when it comes to instant death. Additionally all models with this rule that have more than 1 wound or hull point gain It Will Not Die (6+). This is a fluffy rule set for the Salamander’s and should be very good on the table, especially for Dreadnoughts and Vehicles. Giving them a survivability over that of other legions. It will also help to avoid a fair portion of the wounds inflicted from these weapons, which will add up a lot this edition with all the extra wounds given out to a lot of units.

Like every other legion this is a 1 use only. The Salamander one can be used in the Assault phase, when you are the target of charge by a enemy unit. If successful all models in the your unit gain +1 strength, Weapon Skill and Attacks for the duration of that phase. This sounds really good, however unlike most of the other, this one comes with a downside. Once the combat is over you roll a D6 for each remaining model. On a 6 the unit suffers an auto wound is allocated to the unit which you can’t save in any way. The flip side if the charge is failed is that you gain Fearless until the end of your next turn. All around I think this is powerful and could really turn a combat into your favour. The auto wounds could be an issue but then you shouldn’t suffer to many wounds for this and hopefully you have just dealt a big blow to another unit.

The Weight of Duty - Loyalist only, the warlord and the unit he has joined gain +1 to their strength when locked in combat with an opponent that causes Fear. The unit also gains the Hatred (Traitors). You can’t take Destroys or Moritat’s. A little situational for the first part, but the second part is good, assuming you play loyalist vs traitor most of the time.

Promethean Will - Either, The warlord and the unit they join gain a +1 bonus to their Leadership (max 11) when taking Pinning tests and they reduce the effects of the Fear rule by 1. Again you can’t take Destroyers or Moritat’s. Pinning could be around a fair bit but I’m left thinking it will be a bit situational again, if you fight the right target then it could be really powerful.

Redemption of Flames - Traitor only, the warlord and the unit they join gain a bonus of +1 for all wounds and armour penetration rolls made with the Flame or Volkite weapons. This seems like the best out of the 3! I can’t see many playing Traitor Salamanders though, which makes it a real shame! 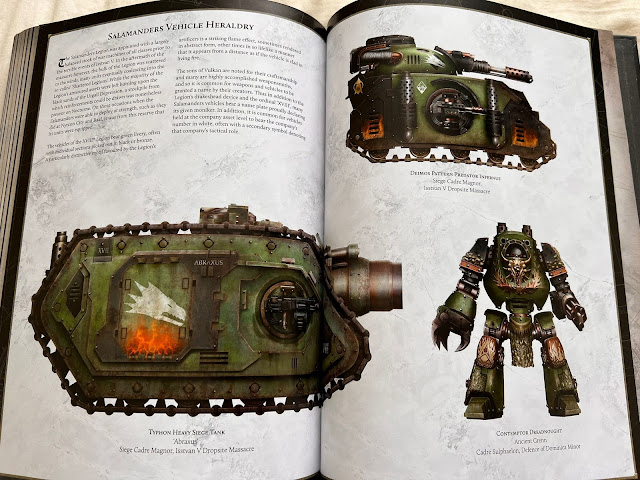 The Covenant of Fire - This is going to be the basis of the army that I am putting together and looks solid all around. It makes Pyroclasts and legion tactical support squads with flamers troops in this Rite. Importantly both gain the Line Sub type, which means they are able to score! It also makes Predator squadrons, with flamers all around, can also be taken as troops, but no Line sub type for these. You can’t Deep Strike any units if using this Rite but you can Flanking Assault or Subterranean Assault. Destroyers and Moritat’s can’t be taken and lastly you need to include a Legion Champion. This whole Rite looks great and I think we will see a lot of lists built around this.

The Awakening Fire - This Rite looks great for those that want to represent the Salamander’s post Isstvan 5, when Vulkan is lost. He, in fact, can’t be included in this Rite. If you want all infantry units can be given the Fear (1) special rule for +20 points. All infantry models in the army also ignore modifiers to Leadership when making Pinning tests. You also gain access to a unique Psychic power, detailed below. On top of all this you also gain an additional non-compulsory HQ choice but you must fill it with a Chaplain and you must also take one within the Rite. Additionally you can’t take any models with the Warhawk jump packs and only one unit with the Cavalry type. Interesting all around I think but perhaps not enough benefits to really make it worth using over other Rites or not using one in the first place. The Fear (1) could be good but will add up quickly if you want to make the best use of it.

Psychic Discipline - Fury of the Salamander - This seems to only be assessable via The Awakening Fire Rite of War. This is a bit of a shame and it would have been great for this to have been wider ranging and open to all Salamander Psychers. You get 2 powers, Salamander’s Fury is done at the start of your turn. If you pass a Psychic test, then all enemy models within 18 inches treat all Open Terrain as Difficult Terrain and all Difficult Terrain as Difficult and Dangerous until the start of the Pyskers next turn. This does mean your Pysker can’t move, shoot or assault though, which makes it a bit restrictive depending on what unit you put around them. The second power is a Psychic weapon. It’s a strength 7 template with pinning, Deflagrate and Shell shock (3). This looks like it could be good to Pin a unit, shell shock reduces Leadership by the number in brackets for the pinning check. This will work nicely if you give the psyker Fear (1) form the Rite of War. A pinned unit can’t react and could allow you to set up for a good charge. I like these powers but access is a bit restricted.

Artifice and Flame - This is basically the same from 1.0. You can replace any heavy bolter with a Dragon’s Breath Flamer for no point cost. Character can also upgrade one weapon to be Master-crafter for 10 points. Solid rules that fit with the fluff.

Dragon’s Breath Weapons - This allows you to change any flame weapon to a Dragon’s Breath version. This version has the same rules but gains +1 strength over the normal version. So a standard flamer becomes strength 5 and heavy flamer strength 6. They all gain the Dragon’s breath rule which means when you use the Wall of Death special rule you inflict D6 hits instead of D3. This will make changing flamer wielding unit very dangerous! Again fluffy, flamers aren’t something I’ve seen much of in my years playing but these rules look great and fit in with the close range fire fight that is the Salamanders preferred style.

Dragonscale Storm Shield - An upgrade for your independent characters to take. It gives a 5+ invulnerable save or increases an existing save by 1. Great on Cataphractii as it give a 3+ invun. You do need to lose your bolter and can’t get extra attacks for 2 weapons. This is still going to be a near auto include on your characters.

Mantle of the Elder Drake - This has changed some, it used to give Eternal Warrior but now grants the Battle-hardened (1) rule. This essentially give Eternal Warrior as it increases the toughness of the character by 1 for attacks inflicted with Instant Death. Meaning that double strength attacks won’t instant kill the character but special rules or strength 10 will instant kill. Not as good as before but still really good. You can over give it to 1 character. 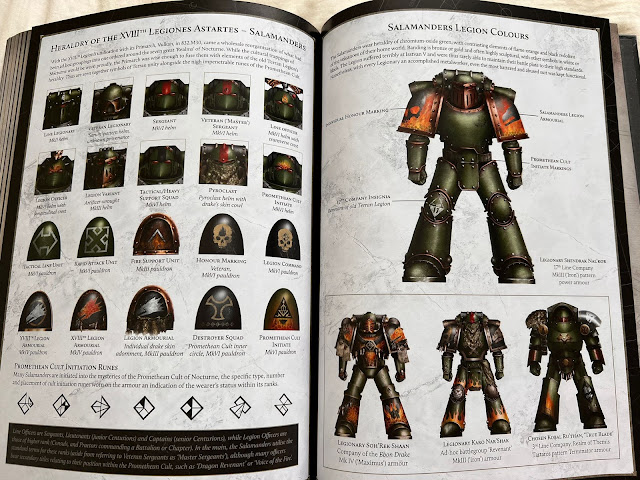 The nicest of men! His model is also one of my favourites among the Primarch models. Vulkan has a solid looking stat line, as all Primarch do, he does have a few differences to the fairly standard 6’s across the board. He gains a strength and toughness of 7. The trade off for these is an initiative of 5 and a move of 7, which is an inch slower than others. However the units you are going to be putting the primarch’s with can’t keep up with them anyway! To represent the toughness and perpetual nature of Vulkan he does have a 4+ It Will Not Die, killing him off will be a difficult task. Even more so when The Draken Scale gives him a 2+ and 3+ Invun. Vulkan also makes all infantry Stubborn via his warlord trait, very useful in keeping your units on the board. His signature hammer is strength 10 AP1 with armourbane and instant death, most importantly no unwieldy. While that initiative of 5 seems a little lacklustre on the surface when you realise your hitting at initiative 5 with a strength 10 hammer all is forgiven! His shooting weapon is quite nice as well. Strength 7 AP2 pistol that does D6 hits if you hit once. It also has Lance and Shock Pulse, making it probably one of the better guns wielded by a Primarch. Vulkan is very tanky and certainly packs a punch in combat, I am looking forward to getting that hammer squashing and smashing!

These look like a great unit! The really good news is 2 wounds, 2+ armour and a 5+ It Will Not die. They also have a 5+ invun against Flame, Plasma, Melta and Volkite weapons. Their gun is a Dragons Breath Flamer with strength 6 or essentially a 12inch Melta gun. The whole unit has to fire in the same ‘mode’ but this is otherwise a super fluffy and effective gun. Much like the Salamander’s as a whole they definitely favour close range fire fights, this gun will win many of those fights! If all that wasn’t enough they also have Melta Bombs, a bolt pistol and a combat weapon, making these guys no slouch in combat either. Especially given that they have 2 base attacks. I’ve brought 20, and they will be forming the back bone of my new legion.

The last unit for the Salamander’s rather short list is another great unit and 1 of the toughest sets of terminators from 1.0. That hasn’t changed in 2.0 either. They are 2 wounds, no longer as special as it was before, but still awesome! They are still Weapons skill 5 and come in Cataphratii armour. They can be upgraded to have, what is actually there most common load out, of Thunder Hammers and Storm Shields. Thunder Hammers are much improved and the Firedrakes have a special rule that allows them to re roll all failed to hits of 1 made in melee. Like the Pyroclasts the also have It Will Not Die (5+). They can be taken as a Retinue Squad for your Master of the Legion. Like much of the army these look like that will hit hard and be a pain to remove from the table.

The Salamanders are certainly low on units but those units all look above average and board line great! The other special rules are solid and fluffy. I am really looking forward to getting my new legion on the tabletop and will enjoy using the set of rules laid out!

Keep your eyes peeled tomorrow to see the next edition to my Salamanders legion!