I'm back with a Xenos related post as promised a week or so ago for the blogs Eldar Cults! Now I must say before I begin that the paint scheme I am trialing is based on a Dark Eldar scheme from the YouTube channel StrikingScopion82 (A great channel if you haven't seen it already) but with a few changes of my own. So I would suggest watching one of his painting tutorials if you fancy having a go at this scheme :). 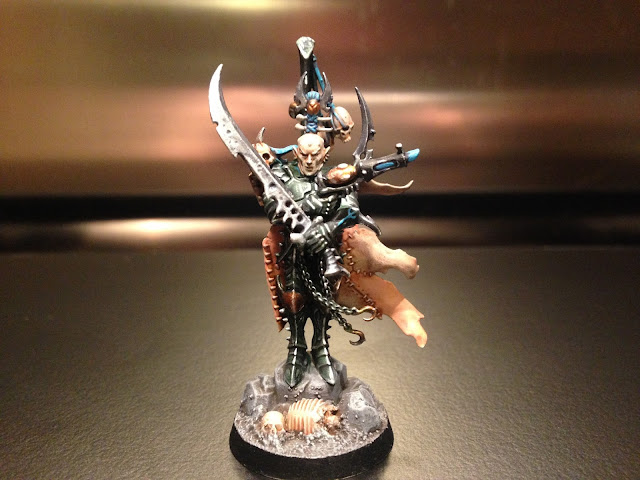 So I chose to start with the Archon! There was no real reason for this other than having a completed character to show you all straight away :). It's a really nice kit with the only real downside to the model being the pose. Its very static and there isn't much room for any simple conversion or change to the pose, however, his skin cape is pretty awesome! I think when I have more bits in the future I may try to convert another model into a different Archon.

If you haven't seen the previous post about the Eldar Cults we are calling them this to reflect how they would have been in 30K as decadent and depraved Eldar who are part of cults of pleasure and pain. Meaning that at that time they were closer in nature to the majority of the Eldar who indulged in these practices before the fall. We will also be doing armies for Craftworld Eldar, Exodites and Corsairs as well as the Eldar Cults who will be represented by most of the Dark Eldar range. 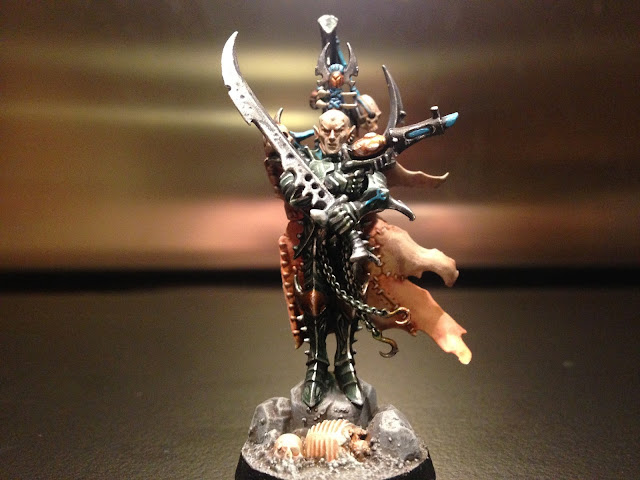 So this is my first attempt at the scheme so there are a few little mistakes but other than that I'm quite happy with how it turned out! I am however, not going to give him a name until I have settled on the scheme by testing it out on a vehicle and larger armour panels.

The scheme is very simple and effective to complete and I have left part of his cape off of the model to give you a better look at the armour. 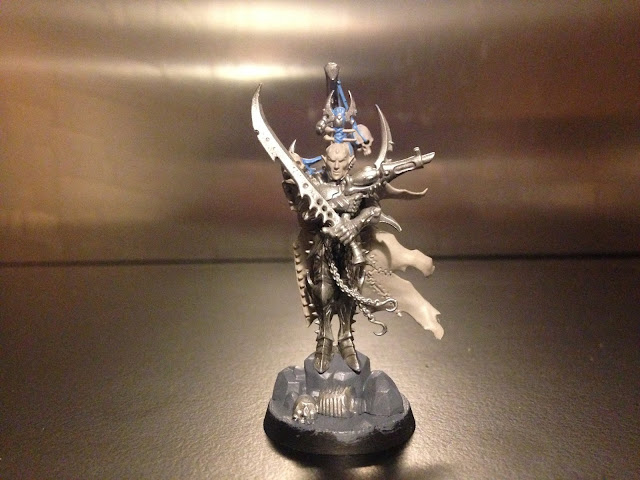 To achieve this effect I have sprayed the model with a base coat of Leadbelcher and then painted the spikes and sword with Iron Breaker to give them a slightly highlighted effect. Then after all the other base coats were finished, I added a wash of Biel-Tan Green and then once this was dry a wash of Drakenhof Nightshade over the top of this to acheive the metallic green effect. Finally a highlight of Runefang Steel was used to pick out the edges of the plate. I chose not to be too neat with the Runefang in some places to give it a battle damaged effect. I will also add that I only used the Drakehof Nightshade to wash the sword and then the Runefang highlight. 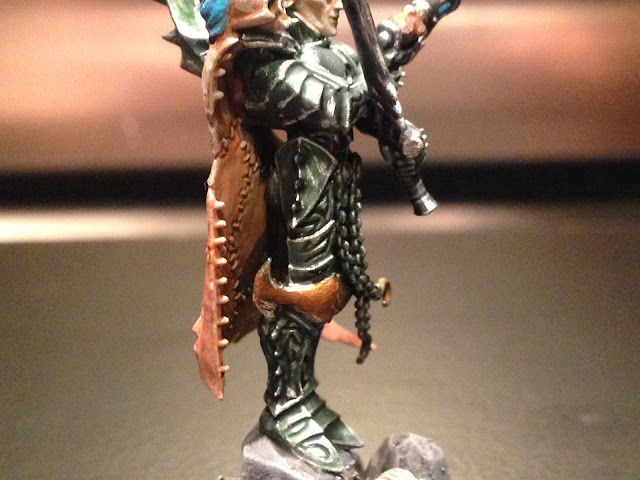 I also decided to include the bronze on the model to help break up the armour plating. To do this I used Hashut Copper as the basecoat and then washed it with Seraphim Sepia and then Agrax Earthshade. I also applied a battle damage highlight in places with the Runefang Steel to break up the bronze slightly. 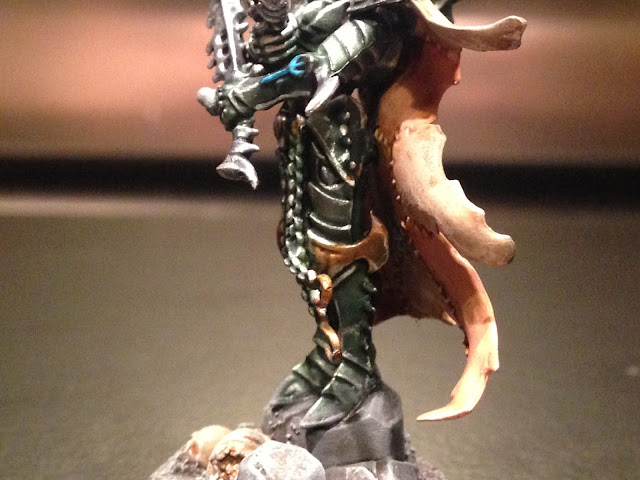 To give the model a contrasting colour I chose to use a light blue on the hair and gun barrel this will be a colour I use throughout the force in different ways to pull the force together when on the table top. I did this by using an initial base layer of Alaitoc Blue over the leadbelcher, followed by a layer of Hoeth Blue. I then washed Drakenhof Nightshade into the recesses and then used a final highlight of Hoeth Blue on the raised areas and inside the gun barrel. 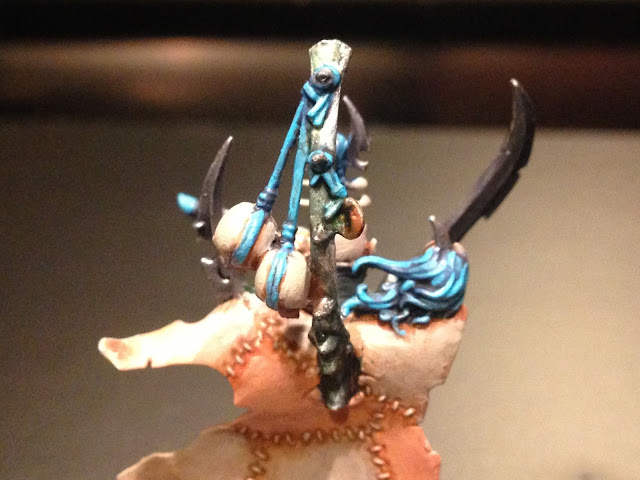 Painting the face and skin cape was probably my favourite part of painting the Archon. For the face I used a base of Rakarth Flesh followed by a wash of Reikland Fleshade into the recesses, I then applied another layer of Rakarth flesh over the head and face avoiding the recesses to highlight the contours of the face. I then used Palid Wych flesh to add the extreme highlight over the eyebrows and cheeks to enhance these prominent areas. Finally I highlighted the bumps around his head with Palid Wych Flesh to suggest these gem stones were inserted into his skin as some weird pain inducing experience! lol. 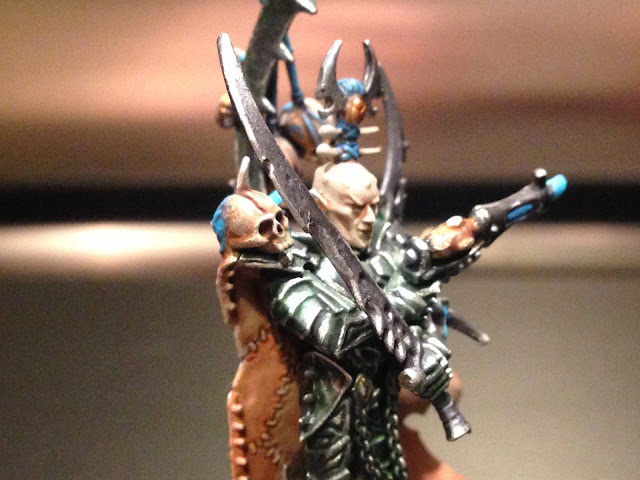 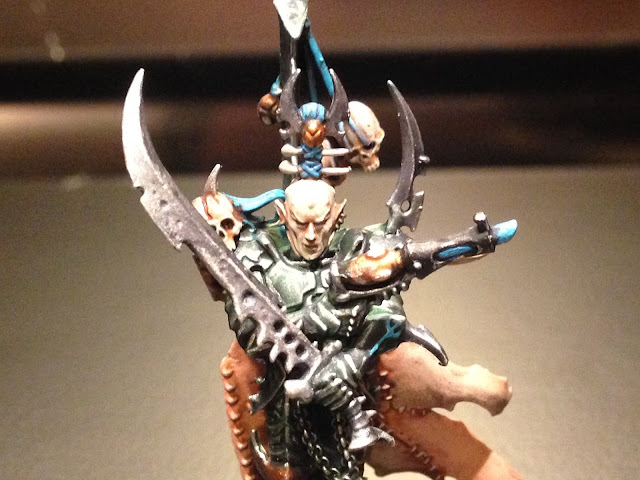 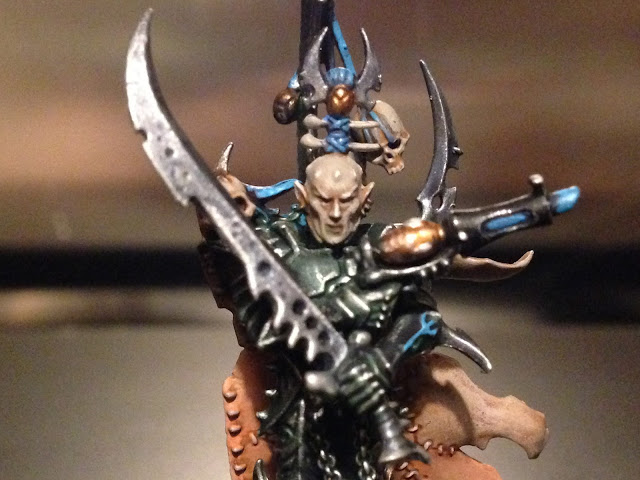 The skin cape was started off with a basecoat of Rakarth Flesh on top of the Leadbelcher. I then used Cadian Fleshtone on the different panels to add a different skin tone to the mix before washing it with Reikland Fleshade. Next I applied another layer of both Rakarth Flesh and Cadian Flesh Tone to the cape but using a different brush technique. The technique I used was effectively drybrushing but instead just using a layer brush with very little paint on it to dab at the panel. This gradually brought the skin layer up again but made it look speckled and worn. I then finished the cape by highlighting the string between the skin panels with Rakarth Flesh. 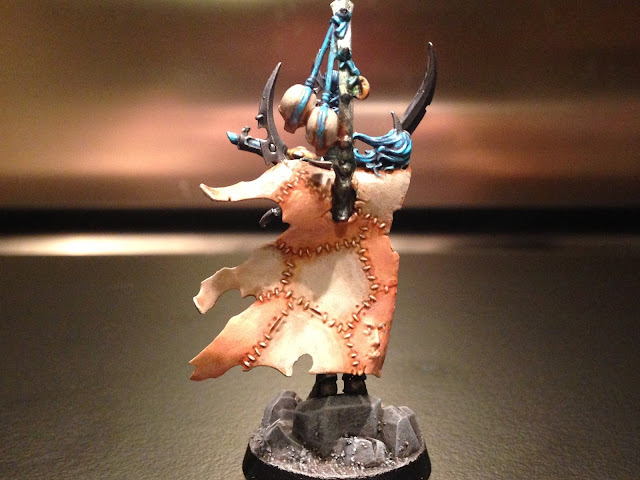 So I hope you like the scheme! It is kind of a cobbled together painting guide but it should give you an idea of how I achieved this. I will be trialing the scheme on a vehicle next so I will show you all the results of that in a future post. If you have any questions please just comment below :).

Thanks again for reading,