New Thunderhawk design is not plastic after all.

Well. Here's my apology. Blown away by this. So much so I actually don't believe it still.
Update: this all being said, I still believe we will see a plastic Thunderhawk. I think this is the Forge World Resin MKIV to the Games Workshop MKV Dreadnought. So many models have started in one iteration and then been ported over to plastic. Maybe the previous Thunderhawk that FW made is now the up and coming Plastic bird.
I still believe in a plastic Thunderhawk. It's just not this one.
From Warhammer Community:

We’ve had a lot of questions over the last few weeks, since our venerable Thunderhawk gunship sold out online.

We can now announce that the Forge World studio are nearing completion on a brand new updated version. 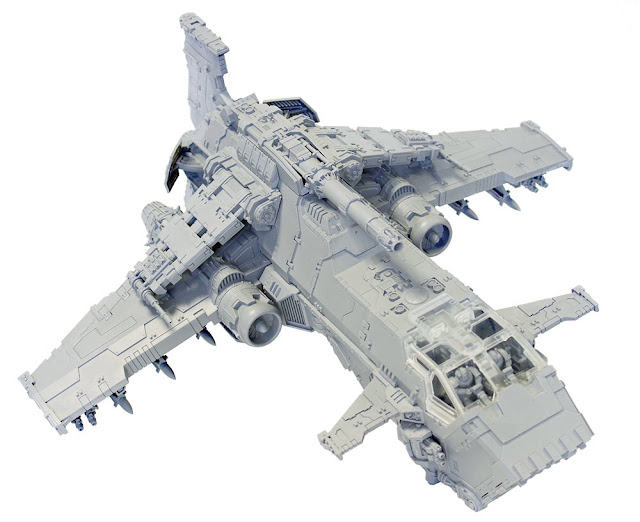 Pre-production model – there may be some slight differences in the final model.

This new resin Thunderhawk keeps the iconic and uncompromising outline of the Thunderhawk we all know and love, but also takes on a few design cues from other recent kits, like the Stormbird and Heresy-era Space Marine Legion tanks.

For the moment, we don’t have anymore to show you, but you can rest assured this Lord of War will be touching down very soon.

In fact, we’re hoping to have it available first at Warhammer Fest this May (which you can get a ticket for here):

Well, let's see what they do with it at the Fest.
Drake Seta
Posted by Drake Seta at 17:50