Having bought the new Warhammer 40,000 game Dawn of War III upon its release, I decided I wanted to do a review of the game after I found it..... (Review spoiler!) Unfortunately very disappointing! So as much as it is a review, its also a warning to do some research before you buy it, as £40.00 plus more money for the probable dlcs, is quiet an investment.

So to start with I am by no means a competent reviewer of PC games but I wanted to share my experience with you if you haven't bought the game yet, I am historically a massive fan of Dawn of War so I have been waiting for this game for a long long time.

On to the first stop which is the in game graphics. Now I have a pretty good gaming computer which I bought brand new at the back end of 2016 almost exclusively for Warhammer Total War and Dawn of War III. I have had a great experience on Warhammer Total war and the graphics and game play are excellent.

I unfortunately can't say the same for Dawn of War. I was dumbfounded when I started my first skirmish on this game and found that the structures and marines were almost blurry and had very poor definition. So I went to my graphics settings and put it to maximum on the graphics and structure detail but there was still no change. 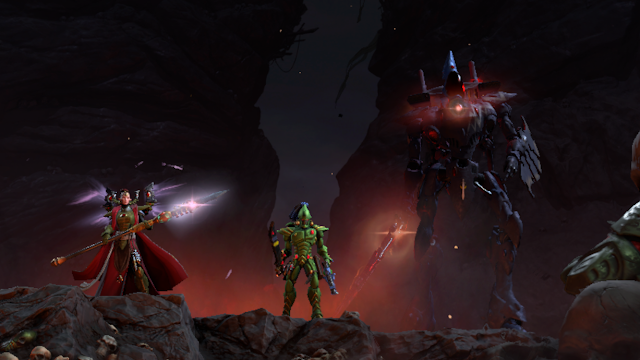 It's hard to show you what I mean from these pictures as they are small, so hopefully you'll be able to increase the size of them but there is just the undefined edges to the figures. I am also not sure if they have corrected the bug between the release and this review but if this is the best graphics available it is still quite underwhelming. My computer is also saying the frames per second are still where they should be for maximum graphics so I don't think it is my computer that is the problem. 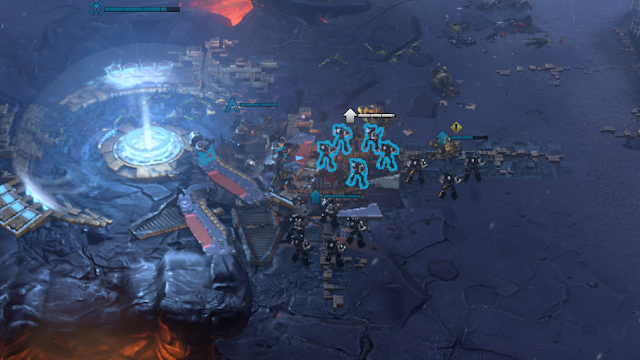 A good example is in this picture which I have cropped down. As you select the Iron Hands the blue selection colour surrounds them and makes them into an into an ill defined blob. Which I am not a fan of, it also does this to buildings but I am sure this was worse when I first played the game on release day so if this is the fix then it isn't brilliant but it is a lot better! I should say a lot of other people were experiencing similar issues as me with the graphics. 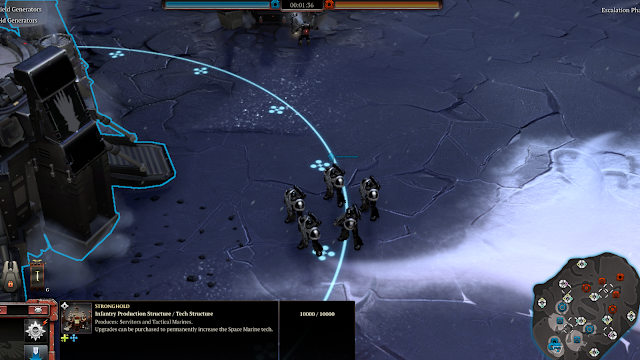 I do think the fix has been applied by the look of this picture, as it was much worse the first time I played the game. Here you can see some Iron Hands, you can only have a five man squad which is a shame but it does look like the scale is pretty good compared to the buildings.

My next complaint and yes there are more! Is that this is as far as you can zoom in and I think the look of the game is a little too much like a cartoon version of the 41st millennium. I also think they have the movement and look of the space marines wrong in this game compared to the previous two games. The Orks also seem very small compared to the hunched, hulking brutes of Dawn of war one and two, so it does feel like they haven't taken cues from the successes of the previous games, which I can't speak highly enough of.

So onto the in game features, there is a campaign mode which looks good from first impressions. I should say I haven't completed the game and I have only done the first few missions but here's a screeenshot of Da Boyz chargin in... 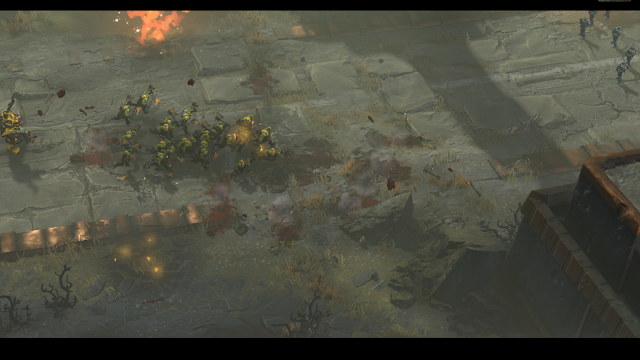 As you can see from the picture it is a pretty cool scenario, but it does show that boyz aren't really any bigger than the guardsmen in the top right hand corner. They also run like humans and for me it just takes away the powerful look the orks are supposed to have. There is also a Meganob on the left who plays an incompetent Warboss in this mission.

It does also allow you to play as space marines and orks in the opening two missions which is cool and i'm assuming you will be allowed to play as the eldar too further along the campaign. 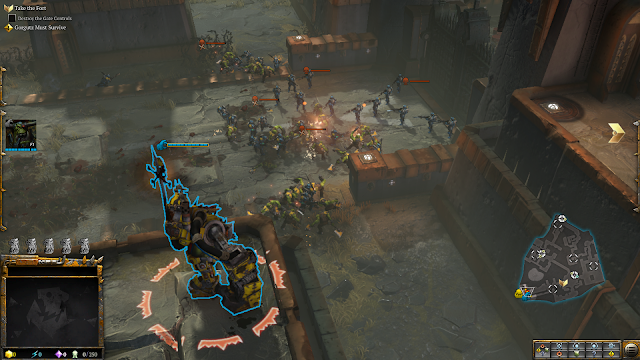 Gorgutz is the Mek who I am assuming eventually leads the orks in the campaign. Here he is being sneaky as the other Warboss sustains heavy losses. Again the graphics are better in this screenshot.

There are also other features such as online multiplayer which I haven't tried yet, the army painter and also the ability to play skirmishes on your own. There are loads of built in options for the existing chapters, craftworlds and factions inside the orks which is really cool. Even the Carcharodons get a paint scheme!

Unfortunately there is no single player planetary campaign like in Dark Crusade and Soul Storm, which is something I was really hoping for!


Okay so onto the important part, which is game play. So I was hoping for a combination of the first two games which is how the developers advertised the game before its release. They said base building is back! But in reality you can only build three buildings other than the HQ and of course the listening post. I was really disappointed with this as I wanted the tactical positioning of squads in cover or in advantageous positions like DoW II or Company of Heroes (Great game) and the extensive base building and bigger squads of DoW I. Unfortunately you get kind of a mix but its again none of the successes of the previous games. 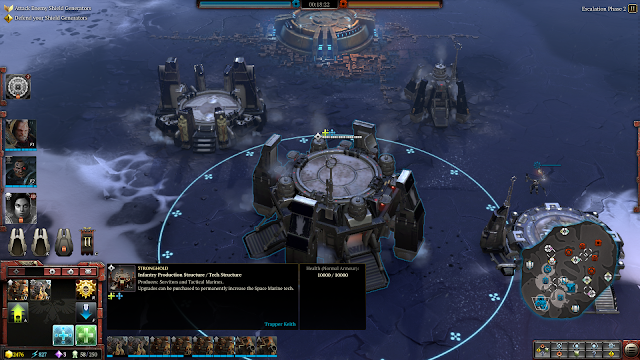 This is the maximum amount of buildings you can build, so its not really base building in my book, you get a barracks, armoury and a vehicle factory which is bottom right. You can advance the capability of your units a lot through the armoury but thats about it. I used to love how you could build a fairly big bases through having the power plants, libarium (not sure if I've spelt that right)  an orbital relay and turrets! which brings me onto my next point.

In the top of the image you can see a structure, which I am assuming is alien and linked to the campaign. In skirmish it is very random though.. you get power points, turrets and this structure too which if you destroy wins you the game. Not sure why its needed, as I personally would have preferred to build my own turrets and power plants but for some reason they are there!

The way you acquire requisition and power is through objectives on the map as you can see below. 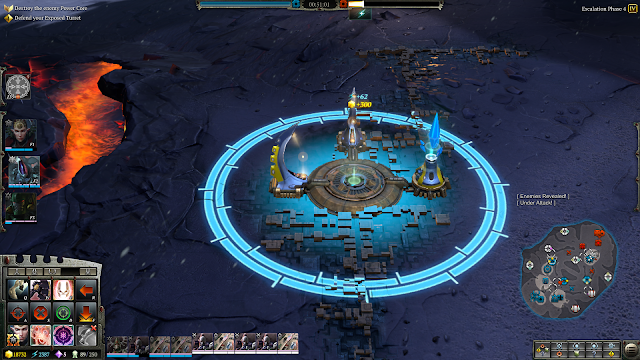 So I was playing as Eldar in this game and you can see how different and strange the new points are. I think I am collecting both power and requisition from this point.

A new mechanic in the game is hero points (again not sure if that is the correct term for it) This is  where you accumulate points as the game goes on which allows you to gain access to elites and heroes. These are the Farseer, Striking Scorpions and Wraithknight. I am not sure if there are more to be unlocked as the game goes on. Again I am not a fan of this as it seems like a 'how can we make this game different' addition and has no real point for me compared to just having enough req to buy a Farseer and then the end game unit for the Eldar being the Wraithknight. 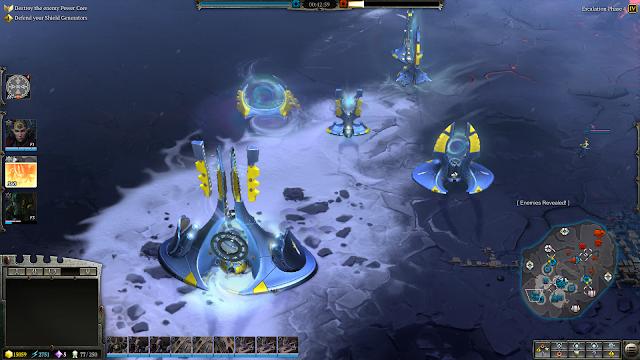 The Eldar buildings do look good though! There is also a timer for when the Wraithknight dies. It takes a while before you get access to it again. 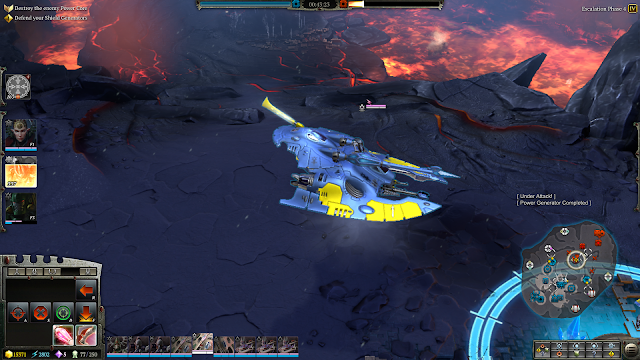 A pretty looking prism tank. Another example of the bug proabably having been fixed. 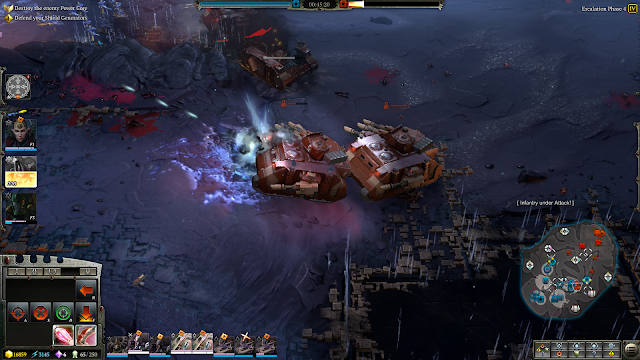 A very cool looking convoy which is taking fire from some Dark Reapers! Come on GW re sculpt the aspect warriors please! The wrecked vehicles are a good part of the game. 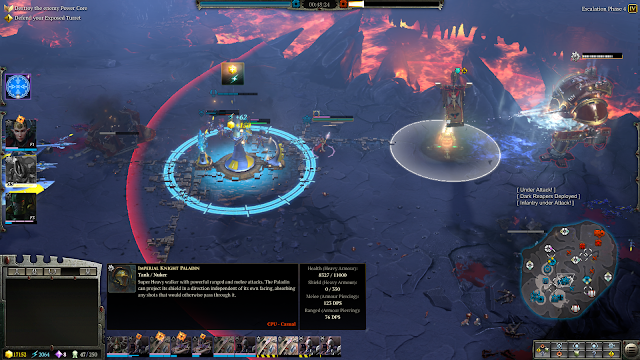 Here's the Imperial Knight battering my listening post. I had four Fire Prisms, two units of Dark Reapers and a Farseer trying to do very little damage to the knight, hence me calling it a Warhound Titan! 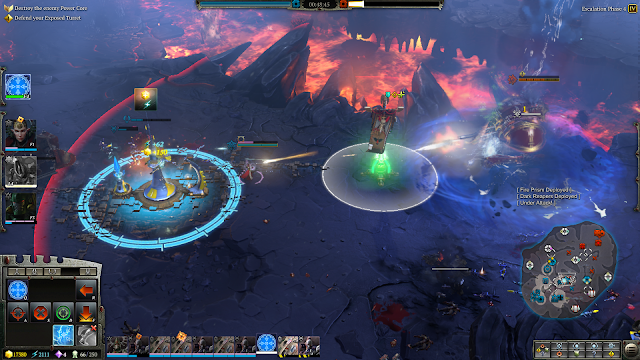 Here I cast the Eldritch Storm on the Imperial Knight which barely did anything! lol 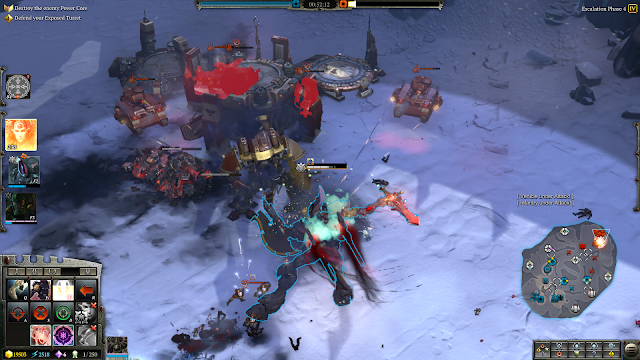 The Wraith Knight taking damage and about to completely obliterate a poor scout with its ginormous sword! He maybe should be concentrating on the three predators and knight though lol. 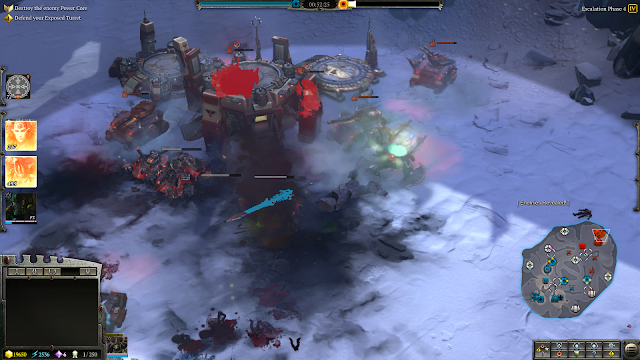 Then a dead Imperial Knight and Wraith Knight! Five predators though,

So onto my final and probably biggest complaint. There is an unresponsiveness in the game from both your units and the AI. Often when a unit is being shot at, they just pause and stay completely motionless. They don't always cower or duck and slowly move away like in even DoW I which is now probably close to or more than ten years old.

I also found the units don't respond to being attacked, like if you're shooting from far away with a heavy bolter, they just don't move out of the way or retreat they just stand and die. I could understand if they were snipers shooting at them, but even your own units sometimes don't respond to commands or just stop still in combat or if a unit moves away they just stop attacking. I know you used to be able to change their stance but in this game it just seems like the game is broken. 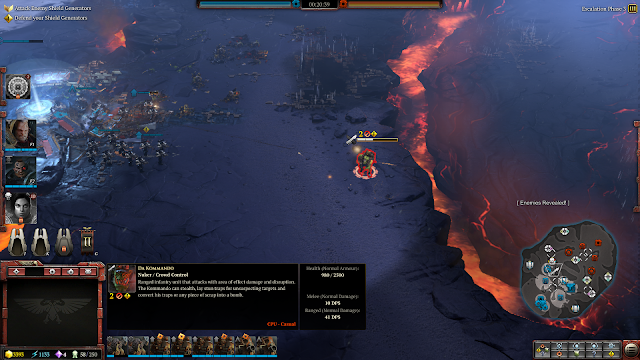 For example in this screen shot the Ork Commando who is under fire from the space marines, he just stopped in his tracks motionless with a hazard sign above his head, but with no crouching or change in position. So I think this is a big problem in the game that I hope they can fix, as its something they got right in DoW I many years ago.

In conclusion I will admit the game is growing on me the more I play it, which I am sure is to be expected. However, I do feel like they released an unfinished game that is the worst game I've ever played on the day of release. The graphics which are better now, were atrocious and comparable to Age of Empires: Age of Kings which was released in the year 2000 or 1999! (Again amazing game) 17 years later, this shouldn't happen and the unresponsiveness of units in the game should also be addressed as it just isn't acceptable having had such great predecessors.

I do think the game will improve as they correct the bugs and release dlcs. Although there is only 8 maps in the skirmish mode which is crazy considering how many there has been on the other games. So if you were thinking of buying the game then maybe consider waiting a few weeks until the bugs are ironed out or the game gets discount in a few months time.

In my opinion the game isn't as good the previous DoW games despite being released in 2017. I am not sure if they are using the game they started to develop before THQ went bust or whether it is a newly developed game but it feels rushed either way.

It does have positives I promise but from my perspective as a DoW fan from day one, it doesn't quite yet live up to the hype!

So if you have the game already let me know what you think to it! If you don't do your research before paying for the game. This review is just my opinion after all on a small amount of the game that I a been able to play so I am sure many other people may feel differently.


Thanks again for reading,