The new rules and models are out and hopefully everyone has started to or has received all the new toys that they ordered and enjoying getting stuck in!

Today we are looking at the new Sons of Horus rules for Heresy 2.0. I have played with the same Sons of Horus army for most of the first edition, a lot of the progress made on this army can be seen on this very blog! I have been looking forward to seeing how this army will change in the new edition. Quick answer is the army below costs more points and no longer scores! Big changes ahead to get it to work!

Unlike a lot of the legions that lost quite a few units and characters Sons of Horus have been really well supported and have a good model range. As such they have a very full set of rules to play with when compared to some others.

This reduces the strength of all Melee attacks made against the SoH in a turn in which they charge or are charged. Vehicles gain a bonus to ramming. The reduction of all Melee strength is huge! That will drop most power fists to strength 7 preventing a lot possible instant death wounds on the, now vastly increases amount, of units with multiple wounds. It really pushes you to want to be in combat but then that is always where they have wanted to be!

Once per game in the shooting phase you can make this reaction. When you are targeting by a shooting attack, before that attack is resolved you can make a shooting attack at +1BS. Death Dealers used to be a SoH legion trait in 1.0, but with the drop to 1 in terms of legion traits it is still nice to get access to something similar via a reaction and this reaction looks really good! To shoot before your opponent gets to shoot could really reduce the impact of any attack coming your direction. This could be really impactful if you get the right unit to shoot. I’m excited to see what happens with this in game. 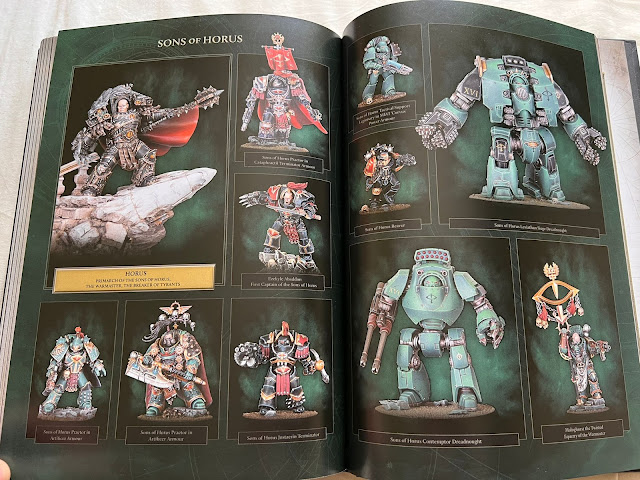 Chosen by Dark Gods - Traitor only, you roll a D6 at the start of your player turn on a 2-5 your warlord gains +1 strength and toughness until your next turn. On a 6 you also regain a wound. On a 1 you lose a wound with no save. I am loving this trait! But it could certainly be high risk and high reward. Being toughness 5 is going to be great to prevent those instant death wounds. The extra strength will certainly help pile on those wounds, depending on what weapon you have armed them with.

Wolf of Luna - Loyalist only, the warlord and unit that they join gain +1 attack when they charge or are charged by a enemy that has the Legion Astartes (X) and the Traitor Allegiance. Very fluffy for the loyalist SoH and will definitely help them make an huge impact in assault.

The Armour of Pride - Can be either, this is very similar to Loken’s old rule. When you’re reduced to 0 wounds you take an immediate Leadership check, if you pass you live on with D3 wounds! If you fail they are removed as a casualty. This doesn’t work against instant death wounds unfortunately. A slightly mixed bag, a safe bet if you don’t like the risk with the Chosen by Dark Gods or aren’t loyal. I feel the other 2 are better though.

The Black Reaving - This was in 1.0, it’s updated and I think slightly better. You still gain Rage (2) if you charge an enemy unit already engage in combat or a unit that is the target of a least one other charge in that phase. Additionally Reavers can be taken as troops and when they are taken as troops they gain the Line sub type. Justaerin also gain Deep strike. The downsides are you need to take a Master of Signal and more Fast attack than Heavy. Overall this is looking really strong and with no way to get my 30 Justaerin to score this is looking like the Rite that I will be using. For me the downside is that I now have to take Reavers in my list that will take up valuable Justaerin points!

The Long March - Another carry over from 1.0, however it doesn’t have much in common with the previous version. Infantry and dreadnoughts gain +1 movement in the movement phase, as long as you don’t run. Legion and Justaerin terminators can be taken as non compulsory troops, however don’t gain Line. Those same terminators gain Outflank. You have to be a traitor to use this Rite and any unit with the Heavy sub type must be in reserve or in a transport. I like the look of this of this Rite and if you’re using a lot of basic troops supported by Terminators then this will be a great Rite for you. Extra movement is great and the new outflanking assault rules will go great with this Rite. 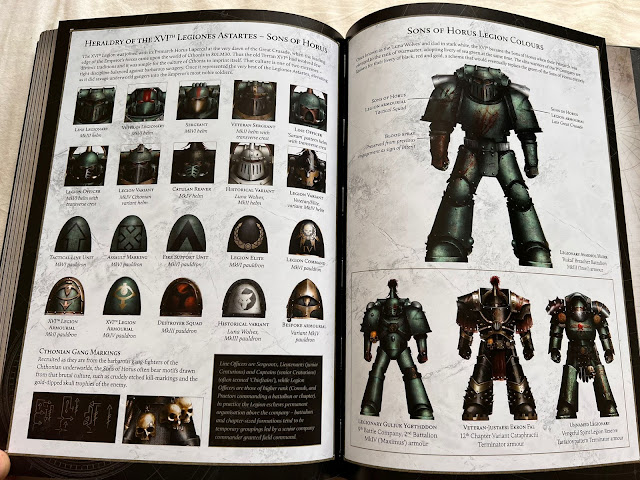 Carsoran Power Axe - I believe this is the axe that is available for the Justaerin in the upgrade pack for them on forgeworld. This is looking like an interesting addition to the legion. It is AP3 but with Breaching (5+). It loses the unwieldy of a power axe, which could make this a great choice for a lot of your SoH.

Banestike Bolters - Banestrike was a bit lacklustre in 1.0, but are now looking like a worth while weapon. They are now Strength 5 AP4 with Breaching (6+). The extra strength is great and what I think will make the upgrade worth it. However it is only 18 inch range.

Dark Emissary - This is an interesting consul that is intended as the Warlord of an allied SoH detachment. They give stubborn to all SoH in the allied detachment. They will be great if you’re attempting to recreate some of those fluff stories of the SoH working with other legions.

Well this is an update to the Warmaster and it is packed with changes. Firstly he is 100 points more now! That is a serious hike in points, he was always in my Justaerin lists but that is a serious investment in points! He has gained an extra toughness and an additional wound. His warlord trait gives all infantry in the army regardless of faction gain +1 leadership and the stubborn special rule. That is a really serious trait that hugely benefits the army. His Master of War is fantastic as well, once per battle you when you’re the reactive player you can increase your reaction allotment by +1 in each phase. He retains the ability to split his attacks between his 2 weapons and he can never be hit in melee on better than a 4+ Regardless of opponents weapon skill. The Serpent’s Scales give him a 2+ 3++. Worldbreaker is solid and slightly better as it gains Brutal and Sunder. The Warmasters Talon is unfortunately not quite as good as it was. It no longer reduces WS and strength like it did and this rule is replaced with Deflagrate. This feels a little disappointing and chances are your going to be using Worldbreaker most of the time now.

If all of that wasn’t enough, you have the option to upgrade Horus to Horus Ascended for +400 points!! This is a serious chunk of points, and you gain quite a bit for it! For starters you gain +1 strength, toughness and wounds. You also gain Feel No Pain (4+), Rage (3) and 3 other special rules. The first is A Dark Fate, When Horus first loses his last wound he is placed into reserve and you can choose to have him re-enter play but with only 1 wound. You can give up Slay the Warlord twice by doing this though. Secondly is The Power of Chaos Eternal, for 1 assault phase (any assault phase), Horus becomes strength and toughness 10 and ignores the unwieldy on the Worldbreaker. Once this phase is over Horus suffers Perils of the Warp, wounds taken must be allocated to friendly models in the same unit as Horus before Horus himself. Lastly you gain The Spreading Corruption. This allows you to upgrade units to Corrupted units for +25 points per unit, this is a mixed bag of befits and downsides. It makes your units more inline with Daemons, giving you Fear (1) and if you fail morale you lose D3 wounds instead of falling back.

What a major change to his rule set! Major army wide buffs and serious melee machine, I am very much looking forward to trying him out on the table. 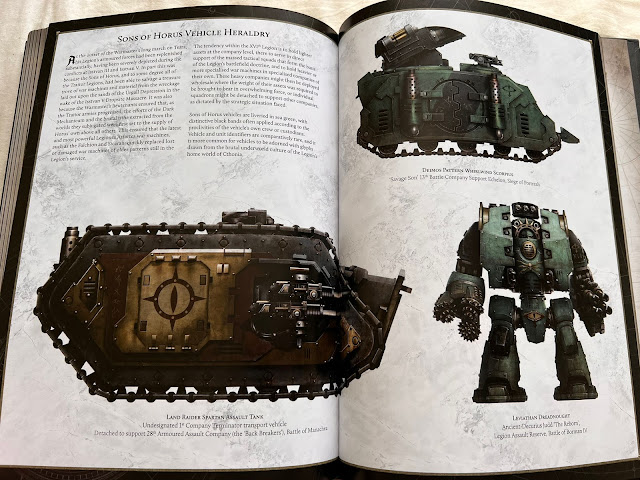 Now even better than before! They have gained BS5 and an extra basic attack each. On top of that they have gained Banestrike combi-bolter and the new Carsoran power axe as standard. Most of the upgrade options are the same, but a few extras have also been added, such as volkite and thunder hammers. They can still be in units of 12. All this good stuff comes with a slight increase in points. These still look like some of the best terminators available to any legion.

These were very lacklustre before and often a point sink that didn’t achieve a lot. They fitted in my army well but never really added much. Right out of the gate they are instantly better as they have an extra wound and a squad size of 20! Even better is the that they are now WS5. It keeps getting better all around Counter-attack (1), precision strikes and shots (6+). Chainaxes as standard as well. Any model can have special weapons as well. These are now looking very good and no longer the second rate unit to the Justaerin.

He remains mostly the same from before, but has gained It Will Not Die (5+). He longer makes Reavers troops but then this ability to make certain units troops seems to have been taken away from nearly all characters. Most interestingly is that he has the Line Sub-type and gives this to the unit he joins. Given the lack of scoring in this edition this could be a really useful feature to boast scoring numbers.

Well he didn’t gain Eternal Warrior, which I still struggle to understand given that he survives for 10k years! However he did gain Battle Hardened (1) which increases his toughness when inflicted with an instant death wound. Essentially this means power fist wielding sergeants can no longer kill him outright. A sort of Eternal Warrior. Great news! Even better is that the power sword has been replaced with a Paragon Blade and his power claw gained shred. His warlord trait is great and gives him and the unit he joins Feel No Pain (4+) when deployed as part of a deep strike assault. Abaddon is now more inline with where he should be amongst his peers.

Very similar to before, he gains the new Wolf of Luna warlord trait and also essentially gains the rules from the Armour of Pride. If you’re building a loyalist SoH look no further for your Warlord. He has gained a BS of 6 and lost an initiative.

Overall the SoH are looking great! However the unique units are all quite costly in terms of points, but all have improved from 1.0. My army has been thrown on it’s head a bit and I definitely will not be getting as much in my 3k lists as I was. If you’re running the more traditionally SoH in green or perhaps even the white of the Luna Wolves then the rules stand to give you give a great advantage in battle. I expect we will see more Reavers running around the tables and possible less Horus’s as his points increases will make lower point list building much more difficult. As for Horus ascended, well I feel he will probably only fit in those games played well over the standard 3k, he will need a 4K list to just be added to the army anyway and I’m not sure he gains enough to justify the crazy 1000 points! I am looking forward to trying him out though!