In the Bunny camp we have decided that its time for us to do an overview of our favourite books, the Horus Heresy series from Forgeworld. Book number 6 has just been released and we want to show those of you that might be on the fence about purchasing this great series that it is well worth it! We are kicking this series off with Betrayal. Below you will find an overview of each of the chapters and my thoughts on the content. 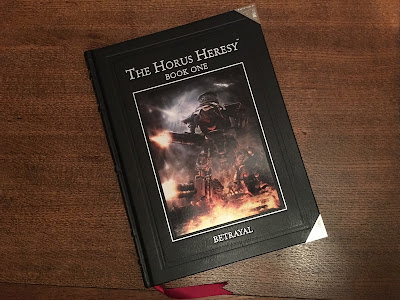 Preface
The book starts with a small 1 page preface written by the 'author' of the book. Now I don't mean the actual author (That was Alan Bligh) but by the character that Alan uses to tell the fateful stories from. This is a nice touch which gives me impression that what I am reading has been taken from the depths of a library somewhere on Terra to discover the horrible truth of a past long gone. This character, most likely a remembrancer, signs the page AK. While a very simple page, it seems to me to add some real weight and significance to the words locked up for all time in the book. Almost as though the storyteller can't believe the story he is retelling actually happened. The art work at the begin is incredible and help sets the mood of the horrors of the story to come. 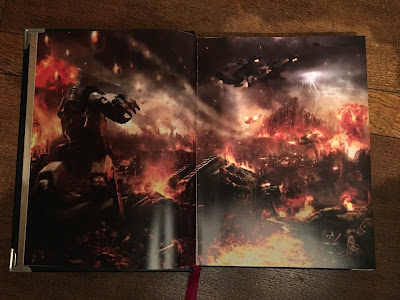 The Age of the Emperor
For the Horus Heresy to make sense we need to understand what came before the it. The 13 pages making up this section detail the rise of the Imperium and the Emperors. The story kicks off with details regarding the Age of strife, followed by The Unification Wars and the rise of the Imperium. It then moves onto the Great Crusade, more details around the Imperium's make up and finally the beginning of doubt within Horus. If you are not overly familiar with the pre-heresy fluff then this is great chapter that will help to fill in your knowledge. If you happen to know the facts then there are still some great tidbits of information that you may not have been aware of to be discovered. 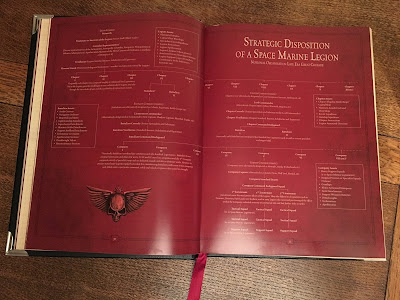 A small chapter that details the history of the Astartes, starting with creation and Initiation. This is followed by the strategic disposition of the Legions. It's a great resource, showing the ideal composition of the legions. You will find the various ranks and structures in place within a legion detailed, as well as some of the assets that the legions had at there disposable. You may find this extremely helpful if you're aiming to recreate a sizeable chunk of a legion or, like us Bunnies, creating your own characters of differing ranks.

The Death of Isstvan III 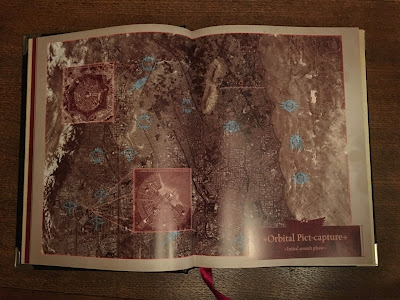 Here is where you find the story of the Warmaster's betrayal, split into a three part story detailing all of the events that took place on Isstvan III. If you have read the first 3 Horus Heresy books from Black Library then this part of the story will be mostly familiar, however this version is more fact driven rather than focusing on the major characters. It is an account of all the events told from the perspective of someone that witnessed them first hand or at least gathered all the information available from those that has witnessed them. It is a really good read. I enjoyed having all the information being in one place, along with detailing some of the elements that were not covered in the Black Library books. Each of the legions that fought on the planet have there time in the spot light. If you wanted more details of what the Sons of Horus, Death Guard, World Eaters or Emperors Children parts in the story then this is certainly the place to find it! The art work looks great as always. There are 2 orbital picts of the Choral City which show the avenues of attack that all the legions took at different times of the battle. The orbital picts really show the scale of conflict and helps reinforce what the story has to say about the forces involved. Ending this chapter are several picts of some of the legions vehicles, extremely useful for painting ideas or styles that you may want to use on your own vehicles. 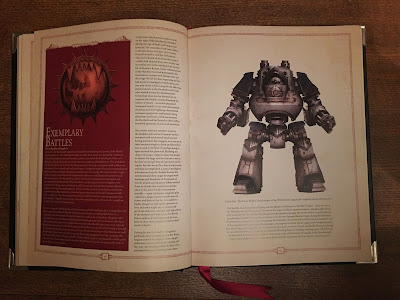 This chapter is entirely devoted to the four legions that fought on Isstvan. It contains loads of specific details on each legions history, structure, fighting style and exemplary battles. As well as plenty of art of the legionnaires armour and armoury, again extremely useful for understanding what your legion of choice looked like during the lead up to and during the events of Isstvan III. If you're collecting Sons of Horus, Death Guard, World Eaters, Emperors Children or are a fluff buff then you really need to read this part of the book! The information contained is first rate and can help you to solidify the direction you take with your legion, as well as giving you a greater understanding of what each legion was like before the Heresy.

Legio Mortis
This is for the Legio Mortis what the previous chapter was for the legions. Great for fluff buffs or Mortis collectors.

The Death of Isstvan III Campaign 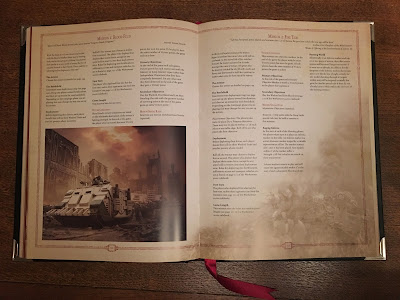 Have you ever fancied playing out the battles of Isstvan? I know I have! The chance to recreate these awesome moments from 'history' that we have been reading about for years has always been something that I have wanted to do. Forgeworld has now given us a great guide on how to recreate these battles an in fact have laid out an entire campaign. Included in this chapter is 6 deployment maps and 6 missions specifically for your battles in the Age of Darkness. Having used these in games that I have played, I can safely say that they are fun, fluffy, enjoyable to play and better than the 40k counterparts! These are really supplement missions intended to fill out the campaign before the main events, 4 Legendary Battles that are intended to represent the major conflicts that took place on Isstvan III. These look fantastic and I am looking forward to playing these with the other Bunnies in the future. As a bonus they have including the Zone Mortalis expansion as well, although I prefer the boarding mission version in Book 3. 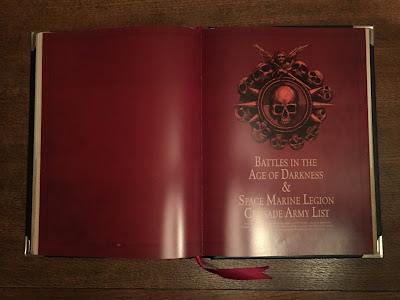 At the time of its release this was the place to find all the information you needed to construct a legion. This chapter is unfortunately outdated now due to the additions and updates made across the other books. The release of the Legion Army list red book includes an updated version of this very army list. Since this separate army list book was released I have not made use of this chapter!

Space Marine Legion Army List Appendix I
Again at the time of the release this was a awesome chapter, it features the rules to the 4 Isstvan legions. Unfortunately as with the previous chapter this is now outdated, twice in fact, so you certainly won't be using this book for these rules.

Age of Darkness Army List Appendix: The Mechanicum
The start of the Mechanicum army list, again very outdated now, don't buy this book for this list! After the Mechanicum list are Forgeworlds Apocalypse rules, which are sort of useful but again not particularly up to date.

My Thoughts
This is a brilliant book, I highly recommend it! The quality of the book is outstanding, each page feels special and the leather finish on the cover combined with the silver metal corners helps to finish off the overall look. The art work is brilliant and inspirational. The story that it tells, while familiar, is a really good read and provides a lot of information that isn't available elsewhere. The legion information is the stand out and if you are a die hard fan of one of the four legions featured in this book then you should definitely be considering getting it. The downside is the out of date army lists which take up nearly half the book. Being the first book also goes against it. Book 2 feels a lot more refined than this one and the legion content included in book 2, is on the whole, better. If I was just starting in the Heresy now would I buy this book? Definitely! They are a Warhammer 30k/40k fan and collectors dream!

What are your thoughts on this book?